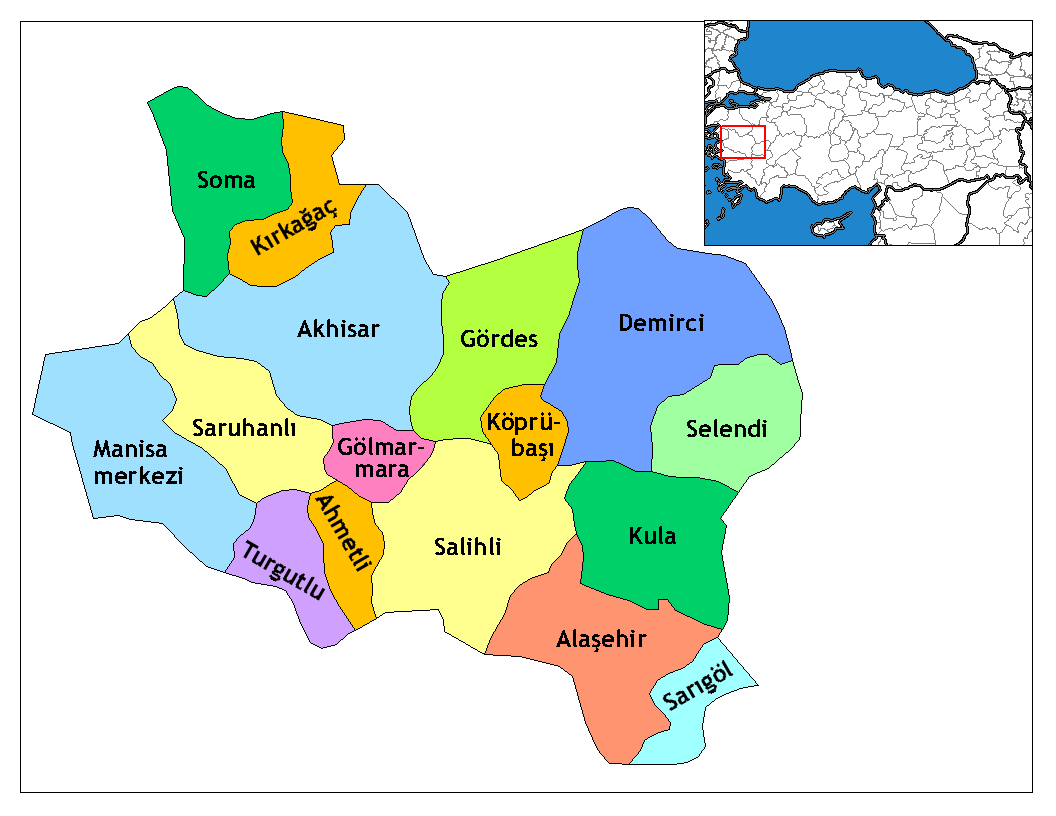 Alaşehir (Greek: Philadélphia (Φιλαδέλφεια)) is a town and district of in the Aegean region of . It is situated in the valley of the Kuzuçay ( in antiquity), at the foot of the Bozdağ (Mount in antiquity). The city is connected to by a convert|105|km|mi|0|abbr=on railway.

It stands on elevated ground commanding the extensive and fertile plain of the , ( in antiquity) presents at a distance an imposing appearance. It has several s and Christian churches. There are small industries and a fair trade. From one of the s comes a heavily charged water popular around Turkey.

Within Turkey, the city's name is synonymous with the dried Sultana , although cultivation for the fresh fruit market, less labour-intensive than the dried fruit, gained prominence in the last decades. Named Philadelphia in antiquity, Alaşehir was a highly important center in the early- and Byzantine periods, and remained a of the . [CathEncy|wstitle=Philadelphia]

Alaşehir began as perhaps one of the first ancient cities with the name Philadelphia. It was established in by King of (197-). named the city for the love of his brother, who would be his successor, (159-), whose loyalty earned him the nickname, "Philadelphos", literally meaning "one who loves his brother". The city is perhaps best-known as the site of one of the in the .

Lacking an heir, Attalus III Philometer, the last of the Attalid kings of Pergamum, bequeathed his kingdom, including Philadelphia, to his Roman allies when he died in . Rome established the province of Asia in by combining and the former Kingdom of .

Philadelphia was an independent neutral city, under the influence of the Latin , when taken in by and an auxiliary force under the Byzantine emperor Manuel II after a prolonged resistance, when all the other cities of Asia Minor had surrendered. Twelve years later it was captured by , who built a wall with the corpses of his prisoners. A fragment of the ghastly structure is in the library of .

Philadelphia was the last Byzantine stronghold in inner Asia Minor. Its Greek inhabitants fled the town during and created , in Greece.

Philadelphia in the Book of Revelation

It is this ancient Philadelphia site that is commonly surmised to have been the headquarters of one of the seven churches referred by John in the . [Revelation 1:11 King James Version] Philadelphia is the sixth church of the seven.

* (b. ) Greek administrator and writer
* , Turkish president and general

*"The Letters to the Seven Churches of Asia And their place in the plan of the Apocalypse", W. M. Ramsay, D.C.L, Litt.D., LL.D., Professor of Humanity in the University of Aberdeen, 1904
*http://www.ephesusguide.com/seven_churches_philadelphia.php
*http://www.enjoyturkey.com/Tours/Interest/Biblicals/philadelphia.htm
*http://www.toursforchurches.co.uk/turkey-churches.htm
*http://www.luthersem.edu/ckoester/Revelation/Philadelphia/main.htm