All past and present dukes have been descended from Edward I; see Dukes of Norfolk family tree.

Before the Dukes of Norfolk, there were the Bigod Earls of Norfolk, starting with Roger Bigod from Normandy (died 1107). Their male line ended with Roger Bigod, 5th Earl of Norfolk, who died without an heir in 1307, so their titles and estates reverted to the crown. Edward II then created his brother Thomas of Brotherton earl in 1312. It passed to Thomas's daughter Margaret, and then to her grandson Thomas Mowbray.

When King Richard II created Thomas Mowbray duke in 1397, he conferred upon him the estates and titles (including Earl Marshal) that had belonged to the earls. His elderly grandmother Margaret was still alive, and so at the same time she was created Duchess of Norfolk for life. Mowbray died in exile in 1399, some months after his grandmother, and his dukedom was repealed. His widow took the title countess of Norfolk.[1]

Between 1401 and 1476, the Mowbray family held the title and estates of the Duke of Norfolk. John Mowbray, the 4th duke, died without male issue in 1476, his only surviving child being the 3-year-old Anne Mowbray. At the age of three, a marriage was arranged between Anne and Richard, Duke of York, the four-year-old son of King Edward IV of England. She remained Richard's child bride until she died at the age of 8.

In accordance with the marriage arrangements, Richard inherited the lands and wealth of the Mowbray family. He was also made Duke of Norfolk. However, upon the death of Edward IV, controversy over the legitimacy arose, as evidence of an earlier marriage on the part of Edward IV emerged. Soon after their father's death Richard, and his brother Edward, were declared illegitimate. Richard was sent to the Tower of London by the new king, Richard III, in mid-1483, thus ending his claim to both York and Norfolk.

For his support of Richard III's claim to the throne, John Howard, the son of Thomas Mowbray's elder daughter Margaret, was created 1st Duke of Norfolk in 1483, in the title's third creation. From this point to the present, the title has remained in the hands of the descendants of John Howard.

Duties and other titles 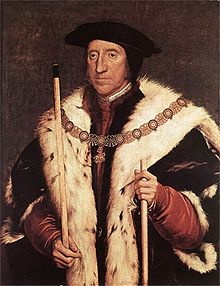 Thomas Howard, 3rd Duke of Norfolk holding the baton of the Earl Marshal.

In addition to the title of Duke of Norfolk, the Dukes of Norfolk also hold the hereditary position of Earl Marshal, which has the duty of organizing state occasions such as the state opening of parliament. For the last five centuries, save some periods when it was under attainder, both the Dukedom and the Earl-Marshalship have been in the hands of the Howard family. According to The House of Lords Act 1999, due to his duties as Earl Marshal, Norfolk is one of only two hereditary peers automatically admitted to the House of Lords, without being elected by the general body of hereditary peers (the other being the Lord Great Chamberlain).

Additionally, the Duke of Norfolk participates in the ceremony of the State Opening of Parliament. He is among the four individuals who precede the monarch, and one of the two of these who walk always facing the sovereign (thus backwards).

As the Earl Marshal, the Duke of Norfolk is head of the College of Arms, through which he regulates all matters connected with armorial bearings and standards, in addition to controlling the arrangements for state functions.

He is one of three claimants to the title Chief Butler of England.

The Duke of Norfolk currently holds the following subsidiary titles: 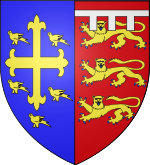 Arms granted by Richard II to Thomas de Mowbray, I st Duke of Norfolk in 1399 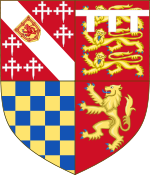 Coat of arms of the Howard Dukes of Norfolk 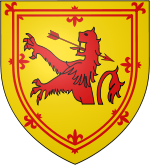 The coat of arms of the Howard Dukes of Norfolk consist of four different elements: the arms (or shield), the crest(s), the supporters, the motto, and the batons of the Earl Marshal. Each will be addressed in turn:

The shield on the bend in the first quarter of the arms (shown to the right) was granted as an Augmentation of Honour by Henry VIII to Thomas Howard, 2nd Duke of Norfolk to commemorate his victory at the Battle of Flodden Field. It is a modification of the Royal coat of arms of Scotland. Instead of its normal rampant position, the lion is shown with an arrow through its mouth.[2]

The main residences commonly associated with the Dukes of Norfolk are: Framlingham Castle, Bungay Castle, as well as Clun Castle in Shropshire, which are now largely ruins; Worksop Manor, Carlton Towers, Norfolk House in London, and most notably Arundel Castle.

Framlingham Castle was originally a part of the properties of the Earls of Norfolk, but when the title fell from use, the castle was administered by the crown. In 1397, it was given to Thomas Mowbray, Duke of Norfolk, by King Richard II. And when the Mowbray line became extinct, it passed eventually to the Howard family. Major repairs to this castle were carried out in 1485 by John Howard. The castle would remain in the Howard family, and thus the Dukes of Norfolk, for a while, but would eventually pass from their possession. In 1553, for example, Framlingham was given to Mary Tudor, sister of King Edward VI.[3]

Bungay Castle was also originally a part of the properties of the Earls of Norfolk. In 1483, it passed into the possession of the Howards, Dukes of Norfolk, and the family continued to own it, apart from brief periods, until the late 20th century. However, the castle has been in a state of decay for quite some time. And for this reason, the 17th Duke of Norfolk, in 1987 presented the castle to the town, which had already begun restoration attempts on its own, with an endowment towards its preservation. It is now owned and administered by the Castle Trust.[4]

Carlton Towers is in Carlton (near Goole), Yorkshire, England. It is a Victorian gothic country house designed by Edward Welby Pugin. It is the Yorkshire home of the Duke of Norfolk. Though the Duke of Norfolk's family still live in part of the house, it is now largely used for wedding receptions and similar events.

Glossop as an occasional residence is situated in the High Peak District of Derbyshire. As the family became closely connected with Sheffield, The Farm in Glossop became increasingly used, particularly when Henry Howard lived there in the 1760s; when the fourteenth Duke, enlarged The Farm as an occasional residence; and during the time of the fifteenth Duke, Henry Granville Fitzalan-Howard, who had interest in the activities of the City. The Glossop estate was sold by the family in 1925.

The dukedom of Norfolk has gone through three creations: in 1397, when it was the possession of the Mowbray family; in 1477 when it was a duchy of the Duke of York; and in 1483, when it came into possession of the Howard family. Notable members of the Howard Family were Anne Boleyn and Catherine Howard, second and fifth wives of Henry VIII. Both women were nieces of Thomas Howard, 3rd Duke of Norfolk, who played a major role in the machinations behind their relationships, and eventually marriages to Henry VIII. Also they were the granddaughters of Thomas Howard, 2nd Duke of Norfolk. He was the father of Anne's mother Lady Elizabeth Howard, later Elizabeth Boleyn, Countess of Wiltshire and Ormond and Catherine's father Lord Edmund Howard, making the queens first cousins.

Duchess and Countess of Norfolk 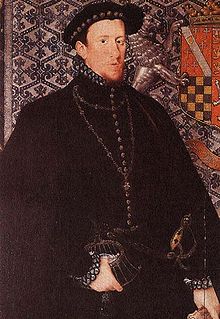 Knights of the Garter 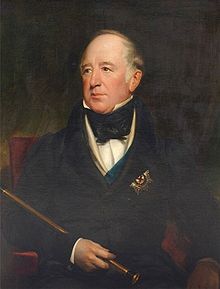 12th Duke of Norfolk shown wearing the star and sash of the Order of the Garter.