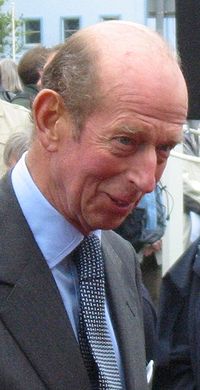 Duke of Kent is a title which has been created various times in the peerages of Great Britain and the United Kingdom, most recently as a royal dukedom for the fourth son of George V.

A title associated with Kent first appears anciently with the Kingdom of Kent (or Cantware), one of the seven Anglo-Saxon kingdoms that later merged to form the Kingdom of England. The Kings of Cantware (or Kent) date back to about 449. After 825, when the Kingdom of Kent was taken over by Egbert, King of Wessex, Kent became a dependency of Wessex and was ruled by sub-kings, usually related to the Wessex rulers. The titular kingship became something like the heir-apparent's title, as Aethelwulf, Egbert's son, became King of Kent in 825. By 860, Kent lost its status as a kingdom, becoming absorbed into Wessex.[1]

In the peerage of England the first title of Kent was that of the Earl of Kent. After the death of his father, Godwin the Earl of Wessex, Leofwine (c. 1035–1066), sometime between 1056 and 1058, became Earl of Kent, a new earldom at the time.[2] It is possible that Godwin was the first Earl of Kent, since he ruled over that area as well as many others.

After Leofwine's death at Hastings in 1066, William the Conqueror named his half-brother, Odo of Bayeux (c. 1036–1097), who was also Bishop of Bayeux, the new Earl of Kent. However, Odo was twice removed from this title. The first occasion was in 1082, when he was imprisoned; the second was in 1088, after aiding in the Rebellion of 1088, after which he fled England.

Marquess, then Duke of Kent

Henry Grey (1671–1740) succeeded his father, Anthony Grey, as the 12th Earl of Kent in 1702. In 1706, he was elevated to Marquess of Kent, along with Earl of Harold and Viscount Goderich. In 1710 he was elevated once again as Duke of Kent, and following the death of his sons, Marquess Grey (1740) with a special remainder to his granddaughter. Henry had one son and five daughters with his first wife, Jemima Crew (d. 1728), and one son and one daughter with his second wife, Sophia Bentinck (d. 1741). By the time of Henry's death in 1740, both of his sons had died, Anthony (in 1723) and George (in 1733), leaving the Duke of Kent without a male heir. His granddaughter Lady Jemima Campbell would inherit two titles in her own right, Marchioness Grey and Baroness Lucas; but all Henry's other titles, particularly Duke of Kent, became extinct with his death. And for the next 59 years the title remained so.

On 23 April 1799 the dukedom of Kent was, as a joint title with the dukedom of Strathearn and the earldom of Dublin, given to King George III's fourth son, Prince Edward Augustus. Edward had only one child, a daughter, Princess Alexandrina Victoria (the future Queen Victoria). Upon Edward's death in 1820, the dukedom of Kent became extinct, as he had no legitimate male heir.

The next creation of a title of Kent, was not that of Duke or Marquess, but rather that of Earl, with the creation of Prince Alfred (1844–1900), the second son of Queen Victoria and Prince Albert, as Duke of Edinburgh, Earl of Ulster, and of Kent in 1866. The Duke of Edinburgh (who later became the reigning Duke of Saxe-Coburg-Gotha) had only one son, Prince Alfred, who would have probably inherited the title of Earl of Kent, among his father's other titles, had he not died before his father in 1899. With Prince Alfred's death in 1900, Kent's title once again became extinct.

The current Duke of Kent has two sons. King George V's Letters Patent of 30 November 1917 restricted the style Royal Highness and the titular dignity of Prince to the sons of the Sovereign, the male line grandsons of the Sovereign, and the eldest living son of the eldest son of the Prince of Wales. Great grandchildren of the Sovereign in the male line enjoy the courtesy titles of the children of dukes. Therefore, the heir apparent to the dukedom of Kent (or properly the 1934 creation of it), is George, Earl of St. Andrews (b. 1962). The Earl of St. Andrews married in 1988, and has three children. His son Baron Downpatrick (b. 1988) is second in line to his grandfather's peerages. When Lord St. Andrews succeeds to the dukedom he will be styled His Grace The Duke of Kent. After Lord St. Andrews and Lord Downpatrick, the current duke's younger son Lord Nicholas Windsor is in remainder to the dukedom.

Duties and other titles

The current Duke of Kent carries out numerous duties for the monarchy, both military and civil. The Present Duke of Kent is the Grand Master of the English Freemasons, and has served as the President of The Scout Association of the United Kingdom since 1975[3] and of the Royal Institution.[4] The present Duke of Kent has performed a number of state visits to Commonwealth nations on behalf of the Queen. He has also acted as Counsellor of State. His Royal Highness is the Grand Prior (or Grand Master) of the Order of St Michael and St George. He holds numerous other appointments in the military. The Duke of Kent as been the patron of Endeavour a national youth Organisation for 29 years.

The Duke of Kent holds the following subsidiary titles.

The younger son of the current Duke of Kent is styled Lord Nicholas Windsor. As a Roman Catholic convert, he is barred from succession to the throne. 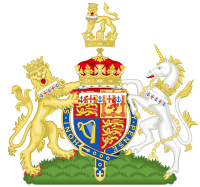 Coat of Arms of Prince Edward, the current Duke of Kent.

The standard of the Duke of Kent is a flag version of his arms [2]. The personal badge of the present Duke of Kent is 'E' encircled by the garter of the Order of the Garter, surmounted by a Type IV Princes coronet as in the Crest.

The Duke and Duchess of Kent currently live at Wren Cottage in the grounds of Kensington Palace, but their office is based at York House at St. James's Palace.

There have been three periods in which there has been a Duke of Kent, the first occurring in 1710, the second in 1799 as a joint dukedom, and the third and present period in 1934. Prior to these, the title existed as an earldom.

Other titles: Earl of St Andrews and Baron Downpatrick (1934)

George and Edward, as probable future Dukes of Kent, would as such be styled "His Grace".

Knights of the Garter

A number of the earls and dukes of Kent have also been knights of the Order of the Garter: