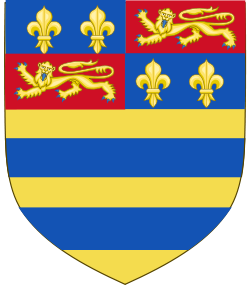 the Arms of the Duke of Rutland.

First creation of the Earldom of Rutland

The title Earl of Rutland was created for Edward Plantagenet, (1373–1415), son of Edmund of Langley, Duke of York, and grandson of King Edward III. Upon the Duke's death in 1402 Edward became Duke of York. The title Earl of Rutland fell in to disuse upon his death at the Battle of Agincourt, and was assumed by other members of the House of York including first earl's nephew Richard Plantagenet, 3rd Duke of York, the father of King Edward IV, and his second son Edmund.

Thomas Manners (c. 1488–1543), son of the 12th Baron de Ros of Hamlake, Truibut and Belvoir, was created earl of Rutland in the peerage of England in 1525. His mother, Anne St Leger, was Richard Plantagenet's granddaughter.

The barony of 'de Ros of Hamlake, Truibut and Belvoir' (sometimes spelled Ros, Roos or de Roos) was created by Simon de Montfort with a writ of summons to the House of Lords for Robert de Ros (1223–1285) in 1264. The title may pass through the female line when there is no male heir, and accordingly, when the 3rd earl, Edward Manners (c. 1548–1587), left no sons, the barony of Ros passed to the family of his daughter Elizabeth (d. 1591) who became the wife of William Cecil, Earl of Exeter.

Edward Manners' successor as the 4th earl was his brother John (d. 1588). The barony of Ros was restored to the Manners family when Francis Manners, the 6th earl (1578–1632), inherited it in 1618 from his cousin William Cecil (1590–1618). However, Francis died without male issue and the assumption of the courtesy title of Lord Ros for the eldest son of subsequent earls appears to have had no legal basis.

On the death of the seventh Earl in 1641 the Earldom passed to his distant cousin John Manners of Haddon Hall, grandson of the second son of the first Earl.

The subsidiary titles of the Duke are: Marquess of Granby (created 1703), Earl of Rutland (1525), Baron Manners, of Haddon in the County of Derby (1679), and Baron Roos of Belvoir, of Belvoir in the County of Leicester (1896). The title Baron Roos of Belvoir is in the United Kingdom peerage; the remaining titles being in the peerage of England. The most senior subsidiary title, Marquess of Granby, is the courtesy title of the Duke's eldest son and heir.

The most notable Marquess of Granby was John Manners (1721–1770), son of the third Duke. An accomplished soldier and popular figure of his time, his title was honoured by being used by a very large number of public houses throughout Britain. The towns of Granby, Quebec and Granby, Massachusetts, United States were also named after him.

The family still own Haddon Hall and Belvoir Castle, both of which are open to the public.

In 2009, as part of the celebrations to mark the 500th anniversary of the occupancy of Belvoir Castle by the Manners family, two aircraft from RAF Cranwell, Lincolnshire, bore the Duke of Rutland's Coat of Arms. On 11 June 2009 the Duke visited the station to see the aircraft — a King Air from 45 (Reserve) Sqn and a Dominie from 55 (Reserve) Sdn.[1]

Edward of Norwich's brother, Richard of Conisburgh, had been attainted and executed for treason in August 1415. This attainture stood in the way of his son Richard Plantagenet succeeding Edward until the king deemed it prudent to restore them.

The Earldom fell out of use after the 2nd Earl. Its heir ascended the throne as Edward IV, so it would have merged with the throne anyway.

The heir apparent is Charles Manners, Marquess of Granby (b. 1999), elder son of the 11th Duke