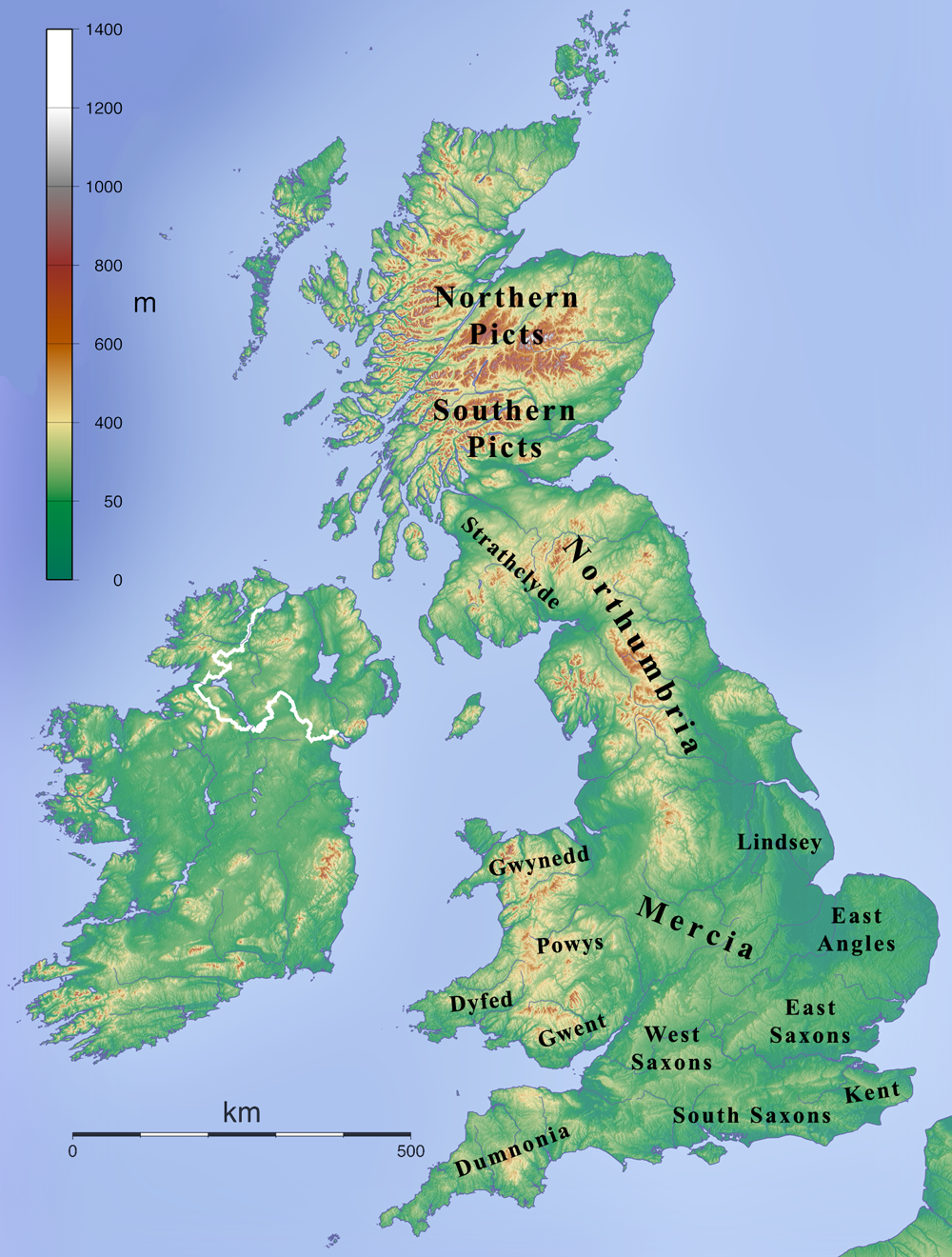 image_map_caption = Britain around AD 800
common_languages = Anglo-Saxon
year_start = 450
year_end = 871The Kingdom of Kent was a kingdom of in southeast and was one of the seven traditional kingdoms of the so-called Anglo-Saxon heptarchy.

The origins of Kent are obscure but the boundaries of the realm are likely to correspond to the ancient tribal lands of the tribe or "Ceint" after which the kingdom is named. Caesar referred to Cingetorix, , and as kings of the four regions of "Cantiacia". Later kings are known from their coins, including , , , and Amminus.

The Kentish coastline was known as the and was guarded by a series of very effective fortresses. After the evacuation of the last Roman legions from Britain a number of Jutish ships made landfall on the shores of Britain. The British ruling council was offering them payment in return for "federati" service defending the realm in the north from the incursions of s and s. According to legend they were promised provisions and offered the island of "Ynys Ruym" - now known as - in perpetuity to use as a base for their operations. It is recorded in the that their leader, Hengist, advised;

:Take my advice and you will never fear conquest from any man or any people, for my people are strong. I will invite my son and his cousin to fight against the Irish [the Scoti] , for they are fine warriors.

Apparently the assaulted the enemy and brought much needed relief to the beleaguered Romano-British communities of the north. It is further said that the British king married , the daughter of Hengist with the Cantiaci "civitas" (Kent) as the bride-gift.

was king of "Ceint" in the time of according to . The word 'king' may be misleading and it is more likely that the 'province' of the Cantiaci was ruled jointly by a civil governor (Gwrangon?) and a military governor, according to classic Roman institutions and that Hengest became the new military governor.

:They sealed its [Britain's] doom by inviting in among them (like wolves in to the sheep fold), the fierce and impious Saxons [sic] a race hurtful both to God and men, to repel the invasions of the northern nations. Nothing was ever so pernicious to our country, nothing was ever so unlucky. What palpable darkness must have enveloped their minds-darkened desperate and cruel! Those very people whom, when absent, they dreaded more than death itself, were invited to reside, as one may say, under the selfsame roof. The Jutes began making ever increasing demands for provisions from their hosts who became increasingly divided and fractious. Each time the Britons threatened to withhold the supplies the Jutes threatened to break the alliance and ravage the country. - Vortigern's own son - assembled an army and attacked the Jutes. Vortimer died at the alongside the Jutish co-ruler of Kent - . The next year the Jutes were attacked again at the .

Reputedly, a banquet took place ostensibly to seal a peace treaty between the Britons and their Germanic foes which may have involved the cession of modern-day Essex. As told, the story claims that the "Saxons"—which probably includes Angles and Jutes—arrived at the banquet armed, surprising the British, who were slaughtered. This event was dubbed the "Night of the Long Knives" by and is the original event to bear that name. The only escapees from this slaughter were said to be Vortigern himself, and Saint . The historical existence of this event or persons involved in it is conjectural as textual evidence is weak and begins in the 7th century.

The British government under unravelled and civil war was spreading across the country. Further actions took place at the but Kent was never recovered. The pacified territory of Ceint was from now on known as "Cantware" and its kings traced their lineage from Hengist.

The first securely datable event in the kingdom is the arrival of Augustine with 40 monks in . Because Kent was the first kingdom in England to be established by the Germanic invaders it was able to become relatively powerful in the early Anglo-Saxon period.

Kent seems to have had its greatest power under Æthelbert at the beginning of the : Æthelbert was recognized as until his death in , and was the first Anglo-Saxon king to accept , as well as the first to introduce a written code of laws in 616. After his reign, however, the power of Kent began to decline: by the middle of the century, it seems to have been dominated by more powerful Anglo-Saxon kingdoms.

In , Kent was conquered by ; within a year, Caedwalla's brother Mul was killed in a Kentish revolt, and Caedwalla returned to devastate the kingdom again. After this, Kent fell into a state of disorder. The ns backed a named Oswine, but he seems to have reigned for only about two years, after which Wihtred became king. Wihtred did a great deal to restore the kingdom after the devastation and tumult of the preceding years, and in he made peace with the West Saxons by paying compensation for the killing of Mul.

The history of Kent following the death of Wihtred in is one of fragmentation and increasing obscurity. For the 40 years that followed, two or even three kings typically ruled simultaneously. It may have been this sort of division that made Kent the first target of the rising power of : in , he gained supremacy over Kent and began to rule it through s. By the early , it appears Offa was attempting to rule Kent directly, and a rebellion followed. A battle was fought at in , and although the outcome was not recorded, the circumstances of the years that followed suggest that the rebels of Kent prevailed: Egbert II and later Ealhmund seem to have ruled independently of Offa for nearly a decade thereafter. This did not last, however, as Offa firmly re-established his authority over Kent in .

From until , Kent was ruled directly by Mercia. In the latter year, however, Offa died, and in this moment of Mercian weakness a Kentish rebellion under Eadbert Praen temporarily succeeded. Offa's eventual successor, , reconquered Kent in , however, and installed his brother Cuthred as king. After Cuthred's death in , Coenwulf ruled Kent directly. Mercian authority was replaced by that of in , following the latter's victory at the Battle of , and the Mercian Baldred was expelled.

In , when all southern England was united under , Kent was on the brink of disaster. A hundred years earlier pagan had begun their raids on these shores&mdash;they first attacked on the coast of killing the monks and devastating the Abbey. They then made successive raids further south until in the year the formidable Alfred defeated them, later drawing up a treaty allowing them to settle in and the North East. However, countrymen from their Danish homeland were still on the move and by the late 880s , a highly experienced warrior-leader, had mustered huge forces in northern having besieged and taken .

Up to 350 Viking ships sailed from Boulogne to the south coast of Kent in . A massive army of between five and ten thousand men with their women, children and horses came up the now long-lost Limen estuary (the east-west route of the in reclaimed ) and attacked a Saxon fort near lonely St Rumwold's church, , killing all inside. They then moved on and over the next year built their own giant fortress at Appledore. On hearing of this, resident Danes in East Anglia and elsewhere broke their promises to Alfred and rose up to join in. At first they made lightning raids out of Appledore (one razing a large settlement, , to the ground - now present day near Ashford) later the whole army moved further inland and engaged in numerous battles with the English, but after four years they gave up. Some retreated to East Anglia and others went back to northern France. There they were the forebears of the who returned in triumph less than two centuries later.

Most of lands of the kingdom are within the bounds of the traditional of .