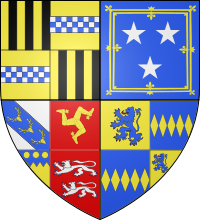 Arms of His Grace the Duke of Atholl

Duke of Atholl, alternatively Duke of Athole, named after Atholl in Scotland, is a title in the Peerage of Scotland held by the head of Clan Murray. It was created by Queen Anne in 1703 for John Murray, 2nd Marquess of Atholl, with a special remainder failing his heirs male to those of his father, the 1st Marquess.

The Dukes of Atholl, as massive landowners, were initiators of and primary participants in, the Highland Clearances, the eviction and forced removal of families from their homes, to be replaced by sheep.[citation needed]

On his death the titles passed to his eldest son, the second Marquess. He had already been created Lord Murray, Viscount Glenalmond and Earl of Tullibardine for life in the peerage of Scotland in 1696. In 1703 he was made Lord Murray, Balvenie and Gask, in the County of Perth, Viscount of Balwhidder, Glenalmond and Glenlyon, in the County of Perth,Earl of Strathtay and Strathardle, in the County of Perth, Marquess of Tullibardine, in the County of Perth, and Duke of Atholl, with remainder failing heirs male of his own to the heirs male of his father. All five titles were in the Peerage of Scotland. His eldest surviving son and heir apparent, William Murray, Marquess of Tullibardine, took part in the Jacobite rising of 1715. He was charged with high treason and attainted by Act of Parliament. An Act of Parliament was also passed to remove him from the succession to his father's titles. Atholl was consequently succeeded by his third son, James, the second Duke. In 1736 he also succeeded his kinsman James Stanley, 10th Earl of Derby as 7th Baron Strange and as Lord of Mann. The Duke's two sons both died in infancy. His eldest daughter Lady Charlotte succeeded him in the barony of Strange and the lordship of Mann. Atholl died in 1764 and was succeeded in the dukedom and remaining titles by his nephew, John, the third Duke. He was the eldest son of Lord George Murray, sixth son of the first Duke, who had been attainted for his participation in the Jacobite Rebellion of 1715. The same year he succeeded the House of Lords decided that he should be allowed to succeeded in the titles despite his father's attainder. He married his first cousin, the aforementioned Charlotte Murray, Baroness Strange. They sold their sovereignty over the Isle of Mann to the British Crown for £70,000. 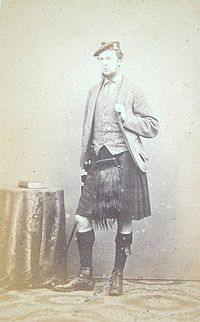 The Duke and Duchess were both succeeded by their eldest son John, the fourth Duke. In 1786 he was created Baron Murray, of Stanley in the County of Gloucester, and Earl Strange in the Peerage of Great Britain. These titles gave him a seat in the House of Lords. Atholl sold his remaining properties and privileges in the Isle of Man to the British Crown for £409,000. He was succeeded on his death in 1829 by his eldest son, John, the fifth Duke. He had already in 1798 been declared to have been of an "unsound mind". The fifth Duke never married and was succeeded by his nephew, George Murray, 2nd Baron Glenlyon, who became the sixth Duke. He was the eldest son of Lord James Murray, second son of the fourth Duke, who had been created Baron Glenlyon, of Glenlyon in the County of Perth, in the Peerage of the United Kingdom in 1821. Lord Glenlyon married Lady Emily Frances, daughter of Hugh Percy, 2nd Duke of Northumberland and 3rd Baron Percy.

The sixth Duke was succeeded by his only child, John, the seventh Duke. In 1865 he succeeded as 6th Baron Percy through his grandmother, Lady Emily Frances Percy. The same year he registered the additional surname of Stewart at the Lyon Court. In 1893 he resumed the original spelling of the title, "Atholl" instead of "Athole". He was succeeded by his second but eldest surviving son, John, the eighth Duke. He died childless in 1942 and was succeeded by his youngest brother, James, the ninth Duke. He never married and on his death in 1957 the baronies of Murray and Glenlyon and earldom of Strange became extinct, the barony of Percy was passed on to his kinsman the 10th Duke of Northumberland (see Baron Percy), while the barony of Strange fell into abeyance (see Baron Strange).

The dukedom and remaining titles were passed on to the late Duke's distant relative George Murray, the tenth Duke of Atholl. He was the grandson of Sir Evelyn Murray, son of Sir George Murray, grandson of the Right Reverend George Murray, son of the Right Reverend Lord George Murray, second son of the third Duke. As all the English titles had become extinct on the ninth Duke's death, the tenth Duke was not entitled to an automatic seat in the House of Lords, gaining the dubious honour of being the highest ranking peer without a seat in the upper chamber of parliament. However, already in 1958 Atholl was elected a Scottish Representative Peer and was able to take a seat in the House of Lords. Through the Peerage Act 1963 all hereditary Scottish peers gained the right to sit in the House of Lords. The tenth Duke was unmarried and was succeeded in 1996 by his second cousin once removed, John Murray, the eleventh and (as of 2010) present holder of the titles. He is the grandson of Reverend Douglas Stuart Murray, brother of the aforementioned Sir George Murray, great-grandfather of the tenth Duke. 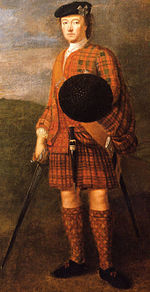 James Arthur Murray (1790–1860), only son of Lord William Murray, third son of the third Duke, was a Vice-Admiral in the Royal Navy. The Very Reverend Lord Charles Murray-Aynsley, fifth son of the third Duke, was a clergyman. His son John Murray-Aynsley was the father of 1) Charles Murray-Aynsley (1821–1901), a Vice-Admiral in the Royal Navy; 2) George Herbert Murray-Aynsley (1826–1887), a Major-General in the Madras Army, and 3) Hugh Murray-Aynsley, a New Zealand politician. Sir George Murray, son of Reverend George Edward Murray, son of George Murray, Bishop of Rochester, was a civil servant. His son Sir Evelyn Murray was Secretary to the General Post Office between 1914 and 1934. Lord James Murray, second son of the fourth Duke, was a soldier and politician and was created Baron Glenlyon in 1821. Anne Murray, Duchess of Atholl, wife of the sixth Duke, was Mistress of the Robes to Queen Victoria. Katharine Stewart-Murray, Duchess of Atholl, wife of the eighth Duke, was Parliamentary Secretary to the Board of Education from 1924 to 1929, the first woman to serve in a Conservative government.

The Dukes of Atholl's traditional residence is Blair Castle, though the family has owned several other residences and castles in the past, notably Huntingtower Castle, Balvenie Castle, Tullibardine Castle and Dunkeld House (the latter two demolished).

The holder of the title also commands the only legal private army in Europe, the Atholl Highlanders, whose headquarters are at Blair Castle.[1]

see above for further succession