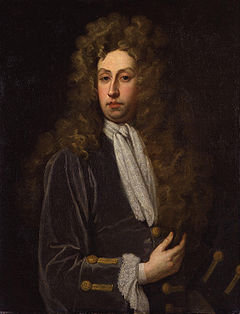 Kimbolton Castle in 1880, the former seat of the Dukes of Manchester.

The Montagu family descends from the judge Sir Edward Montagu (c. 1485–1557). His grandson, Sir Henry Montagu (c. 1563–1642), who served as Lord Chief Justice of the King's Bench as well as Lord High Treasurer of England and Lord Privy Seal, was raised to the Peerage of England in 1620 as Baron Montagu of Kimbolton, of Kimbolton in the County of Huntingdon, and Viscount Mandeville. In 1626 he was further honoured when he was made Earl of Manchester, also in the Peerage of England.

His son, the second Earl, was a prominent Parliamentary General during the Civil War but later supported the restoration of Charles II. His son, the third Earl, represented Huntingdonshire in the House of Commons. His son was the aforementioned fourth Earl, who was created Duke of Manchester in 1719.

His eldest son, the seventh Duke, was Conservative Member of Parliament for Bewdley and Huntingdonshire. His son, the eighth Duke, briefly represented Huntingdonshire in Parliament. He was succeeded by his eldest son, the ninth Duke. He sat on the Liberal benches in the House of Lords and served as Captain of the Yeomen of the Guard in the Liberal administration of Sir Henry Campbell-Bannerman. As of 2007 the titles are held by his great-grandson, the thirteenth Duke, who succeeded his father in 2002 (who in his turn had succeeded his elder brother in 1985).

The heir apparent to the Dukedom takes the courtesy title Viscount Mandeville, and the heir apparent's heir apparent (when such exists) is styled Lord Kimbolton. (This is one of only two exceptions, the other being in the case of the Marquess of Londonderry, to the general rule that the heirs of Viscounts do not use courtesy peerages.)[citation needed] .)

The traditional estate of the family was at Kimbolton Castle, but the 10th Duke sold it in 1950,[citation needed] while residing in Kenya; it is now a private school, Kimbolton School. Only some 50 acres (200,000 m2) of parkland was sold together with the castle, and the 10th Duke retained some 3,250 acres (13.2 km2) of the Kimbolton agricultural estate. This, however, was sold by the eldest son and heir of the 10th Duke in 1975, shortly before the death of his father. The family also used to own Tandragee Castle, in County Armagh, Northern Ireland. They sold it in 1955, and it is now the headquarters of Tayto (NI) Ltd., a potato crisp manufacturer.

The current holder of the title, the 13th Duke, lives in California.

Other titles: Viscount Mandeville and Baron Montagu of Kimbolton, of Kimbolton in the county of Huntingdon (1620)

Other titles: Earl of Manchester (1626), Viscount Mandeville and Baron Montagu of Kimbolton, of Kimbolton in the county of Huntingdon (1620)

The heir apparent was believed to be Alexander Montagu, Viscount Mandeville (b. 1993), only son of the 13th Duke. However his legitimacy has been called into question in the light of a 2011 court case which revealed that the 13th Duke's first marriage had not ended when he married his second wife (Alexander's mother).[1]

The line of succession is as follows:

The only potential heirs to the Earldom (and other subsidiary titles) alone, were the Dukedom to become extinct, would be heirs male of the Hon. James Montagu, third son of the 1st Earl.