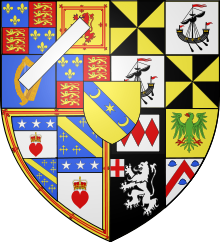 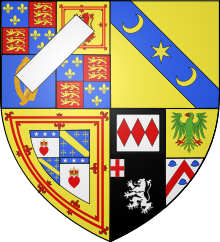 Coat of Arms of the 5th Duke of Buccleuch. 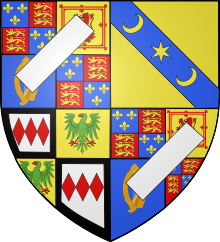 Coat of Arms of the 4th Duke of Buccleuch. 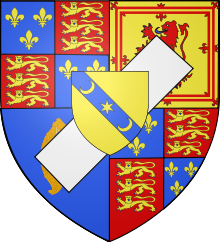 Coat of Arms of the 1st Duke of Monmouth and Buccleuch. 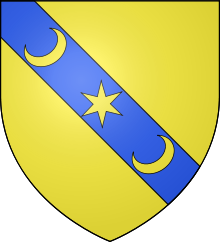 Coat of Arms of the 1st Duchess Buccleuch.[2]

The title Duke of Buccleuch (

/bəˈkluː/), formerly also spelt Duke of Buccleugh, was created in the Peerage of Scotland on 20 April 1663 for the Duke of Monmouth, who was the eldest illegitimate son of Charles II of Scotland, England, and Ireland and who had married Anne Scott, 4th Countess of Buccleuch.

Anne was created Duchess in her own right along with her husband, so that the title was unaffected by Monmouth's attainder of 1685. It passed on to his descendants, who have successively borne the surnames Scott, Montagu-Scott, Montagu Douglas Scott and Scott again. In 1810, the 3rd Duke of Buccleuch inherited the Dukedom of Queensberry, also in the Peerage of Scotland, thus separating that title from the Marquessate of Queensberry. Thus, the holder is one of the only five people in the UK to hold two or more different dukedoms, the others being the Duke of Cornwall and Rothesay, the Duke of Hamilton and Brandon, the Duke of Argyll (who holds two dukedoms named Argyll), and the Duke of Richmond, Lennox and Gordon.

The subsidiary titles associated with the Dukedom of Buccleuch are: Earl of Buccleuch (1619), Earl of Dalkeith (1663), Lord Scott of Buccleuch (1606) and Lord Scott of Whitchester and Eskdaill (1619) (all in the Peerage of Scotland). The Duke also holds the two subsidiary titles of the attainted Dukedom of Monmouth, namely Earl of Doncaster (1663) and Baron Scott of Tindale (1663) (both in the Peerage of England), and several subsidiary titles associated with the Dukedom of Queensberry, namely Marquess of Dumfriesshire (1683), Earl of Drumlanrig and Sanquhar (1682), Viscount of Nith, Tortholwald and Ross (1682) and Lord Douglas of Kilmount, Middlebie and Dornock (1682) (all in the Peerage of Scotland). The Earldom of Doncaster and Barony of Scott of Tindale had been forfeit at the time of the first Duke's attainder, but the titles were restored to the 2nd Duke of Buccleuch in 1742. Until 1835, the Dukes also held lands in the West Riding of Yorkshire and the ancient title of Lord of Bowland. The Duke of Buccleuch is the hereditary chief of Clan Scott.

Sir Walter Scott, Bart., was directly descended of the Lords of Buccleuch. His family history, fancifully interpreted, is the main subject of much of The Lay of the Last Minstrel.

The current Duke of Buccleuch, Richard Scott, the 10th Duke, is the largest private landowner in the United Kingdom and chairman of the Buccleuch Group, a holding company with interests in commercial property, rural affairs, food, and beverages. The title originally comes from a holding in the Scottish Borders, near Selkirk.

The family seats are Bowhill House, three miles outside Selkirk, representing the Scott line; Drumlanrig Castle in Dumfries and Galloway, representing the Douglas line; and Boughton House in Northamptonshire, England, representing the Montagu line. These three houses are still lived in by the family and are also open to the public. The family also owns Dalkeith Palace in Midlothian, which is let, and has owned several other country houses and castles in the past. Its historic London residence was Montagu House, Whitehall, now demolished.

Other titles (3rd Duke onwards): Duke of Queensberry and Marquess of Dumfriesshire (1684), Earl of Drumlanrig and Sanquhar, Viscount of Nith, Tortholwald and Ross and Lord Douglas of Kilmount, Middlebie and Dornock (1682)