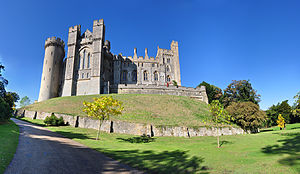 Arundel Castle in Arundel, West Sussex, England is a restored medieval castle. It was founded by Roger de Montgomery on Christmas Day 1067. Roger became the first to hold the earldom of Arundel by the graces of William the Conqueror. The castle was damaged in the English Civil War and then restored in the 18th and 19th centuries.

From the 11th century onward, the castle has served as a hereditary stately home and has been in the family of the Duke of Norfolk for over 400 years. It is still the principal seat of the Norfolk family. It is a Grade I listed building.[1] 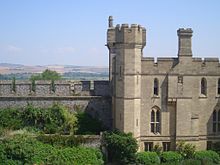 Intersection of the old and new walls

Work started on Arundel Castle in 1067 during the reign of William the Conqueror as a fortification for the mouth of the River Arun and a defensive position for the surrounding land against invasion from France.[citation needed] The original structure was a motte and double bailey castle. Roger de Montgomery was declared the first Earl of Arundel as the King granted him the property as part of a much larger package of hundreds of manors. Roger was a cousin of William's and had stayed in Normandy to keep the peace there whilst William was off in England. He was rewarded for his loyalty with extensive lands in the Welsh Marches and across the country, together with one fifth of Sussex (Arundel Rape). (For other reasons, the generally accepted first creation of the title Earl of Arundel lies in the year 1138 with William d'Aubigny, confirmed in 1155.)

After Roger de Montgomery died, the castle reverted to the crown under Henry I. The King, in his will, left Arundel Castle and the attached land to his second wife Adeliza of Louvain. In 1138, three years after Henry's death, she married William d'Albini II (aka d'Aubigny, the first Earl, of the d'Aubigny family of Saint-Martin-d'Aubigny in Normandy). William was responsible for creating the stone shell on the motte, thus increasing the defence and status of the castle.

Changes to the castle in the medieval period 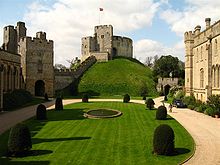 View of Arundel Castle's Norman motte with the quadrangle in the foreground.

Arundel Castle and the earldom have passed through generations almost directly since 1138, with only the occasional reversion to the crown and other nobles for a brief time. Since the Aubigny family first received the castle, changes have been made and the castle has been re-structured to meet the requirements of the nobility at the present time.

In 1139, the Empress Matilda was invited to stay at Arundel for some time during her travel to press her claim to the English throne upon Stephen. The stone apartments constructed to accommodate the Empress and her entourage survive to this day.

In 1176, William d'Aubigny died and Arundel Castle then reverted to the crown, under Henry II, who spent a vast amount of capital re-structuring the building, mainly for domestic needs. When Henry died, the castle remained in the possession of Richard I ("the Lionheart"), who offered it to the Aubigny family line under William III comte de Sussex. The last in the Aubigny male line was Hugh, who died at a young age in 1243. When his sister Isabel wed John FitzAlan of Clun, the castle and earldom were turned over to him. The FitzAlan family enjoyed an uninterrupted hereditary line until 1580.

Upon the death of the seventh Earl in 1272, Arundel Castle and the earldom passed to his five-year-old son Richard. Thirteen years later, Edward I granted Richard the right to hold two fairs per year at the castle as well as the power to collect taxes. This grant provided funding for the much needed renovation of the castle, which, by this time, had fallen into disrepair. Once sufficient funds were available, FitzAlan added the well tower and re-constructed the entrance to the keep. After Richard's death, his son Edmund was executed for his part in the rebellion against Edward II. Arundel subsequently passed to the 6th son of Edward I who was also executed. The castle and titles passed back to the FitzAlans four years later.

The tenth Earl, Richard, fought at the Crécy with Edward III and the Black Prince. FitzAlan was also responsible for the building of the FitzAlan Chapel, built posthumously according to his will.

The eleventh Earl, Richard, was treated harshly by Richard II. At the funeral of the Queen Anne, the Earl was beaten for arriving late and asking to leave early. Richard II eventually grew tired of his treachery and executed the Earl before confiscating his property. Arundel was given by the crown to John Holland, 1st Duke of Exeter, but when he was executed by Henry IV, Arundel was returned to the FitzAlan line once again. The next earl, Thomas, married the daughter of John of Portugal. The couple eventually became the first members of the FitzAlan family to be buried in the chapel built by Richard FitzAlan, the tenth Earl.

The FitzAlan line ceased when Mary FitzAlan, daughter of the nineteenth earl, married Thomas Howard, 4th Duke of Norfolk. The crown seized Arundel upon his execution for conspiring to marry Mary, Queen of Scots, in 1572. The castle was later returned to his heirs, the successor Earls of Arundel.

Although the castle remained in the hands of the Howard family over the succeeding centuries, it was not their favourite residence, and the various Dukes of Norfolk invested their time and energy into improving other ducal estates, including Norfolk House in London and Worksop.

Charles Howard, 11th Duke of Norfolk was known for his restoration work and improvements to the castle beginning in 1787 and continuing for a number of years, as he desired to live there and entertain his visitors there. Many of his improvements have since been revised and remodeled, but the library in the castle is still as he had it designed and built. He held a large party at Arundel Castle to celebrate the 600th anniversary of the signing of Magna Carta shortly before his death in 1815.

In 1846, Queen Victoria and her husband Prince Albert visited Arundel Castle for a few days. Henry Charles Howard, 13th Duke of Norfolk had remodelled the castle in time for her visit. He was thinking of disposing of some of the 11th Duke of Norfolk's work, as there had been several complaints from the celebrities of the day that it was too cold, dark and unfriendly. The Duke devised a brand new apartment block for the new Queen and her Consort, Prince Albert to stay in, commissioning a portrait of the Queen and decorating the block with the finest of Victorian furniture and art. There was also a re-structuring of bedrooms for the court. The Duke spared no expense to make the Queen's visit enjoyable, and he succeeded.

The Queen was received on December 1, 1846 by the Duke, Mayor of Arundel Edward Howard Howard-Gibbon, and other town dignitaries, and then she retired to her private apartments in the castle. On her visit she walked in the newly designed grounds and visited areas of the county nearby, including Petworth House. Almost every part of the castle that the Queen would visit was re-furbished and exquisitely decorated to meet Royal standards. At the end of her visit, she wrote to the Duke and commented on how enjoyable her visit was, commenting on the "beautiful" castle and the friendliness of her reception. The suite of rooms in which Victoria stayed are now part of the family's private apartments but the suite of bedroom furniture made for her is on display. Among other things to see are the Queen's bed, the guest book bearing her and her Consort's signature and her toilet.

Changes to the castle from 1850 to the present day 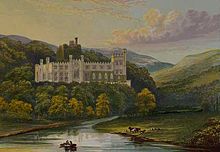 The 19th-century embellishments had not been completed when this picture was published in 1880.

Soon after the Royal visit the 14th Duke began re-structuring the castle again. He died before its completion, and the work was completed by the 15th Duke in 1900. Changes were made to the grounds and he addressed the dark Victorian gardens and made them bright and colourful. The problem of light within the castle was addressed by the replacement of windows to make the interior brighter. The keep was restructured later on, but the original keep was kept until then for its antiquity and picturesque quality.

The 16th Duke had planned to give the castle to the National Trust but following his death in 1975 the 17th Duke cancelled the plan. He created an independent charitable trust to guarantee the castle's future as an economically viable residence, and oversaw restorative works.[2] Today the castle remains the principal seat of the Dukes of Norfolk, the dukedom currently being held by the 18th Duke, the Earl Marshal of England. Most of the castle and its extensive grounds are open to the public. The Duke of Norfolk does not own nor run the private trust which owns Arundel Castle according to the declaration he has made in the House of Lords Register of Lords Interests 2011.