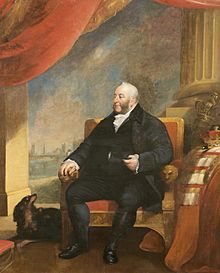 A portrait of Howard in later life from the collection of the Gloucester City Museum & Art Gallery.

He was known for actively participating in the Whig party as part of the opposition to King George III. Surrey succeeded to the title of 11th Duke of Norfolk in 1786 upon the death of his father. He spent a considerable amount of his money rebuilding and refurbishing Arundel Castle after inheriting his title and lands.

He married, firstly, Marion Coppinger (daughter of John Coppinger), on 1 August 1767, who died a year later giving birth. He married, secondly, Frances Scudamore (1750–1820), the only child of Charles FitzRoy-Scudamore on 6 April 1771 at London, England. Frances soon became insane after her marriage and was locked away until her death in 1820. Howard then lived with several mistresses. His longtime mistress, Mary Ann Gibbon (a cousin of Edward Gibbon), was reputed to be his secret third wife and she had five children by him, including two sons who were officers of arms, Matthew Howard-Gibbon, and Edward Howard-Gibbon. An older illegitimate son by a previous mistress, Sir William Woods later became Garter King of Arms.

Norfolk renounced his Catholicism to start his political life, and remained a staunch supporter of Catholic Emancipation, opposing the war with the American colonies.[1] Norfolk was a good friend of Sir Bysshe Shelley, allowing him in 1786 to make out the patent for his baronetcy.[1] Shelley was influenced by Norfolk and built the flamboyant Castle Goring, one side of which was a partial copy of Norfolk's residence of Arundel Castle.[1]

Norfolk died on 16 December 1815 at age 69, without issue from either of his two legal marriages. Upon his death, his lands and titles passed to his cousin, Bernard.