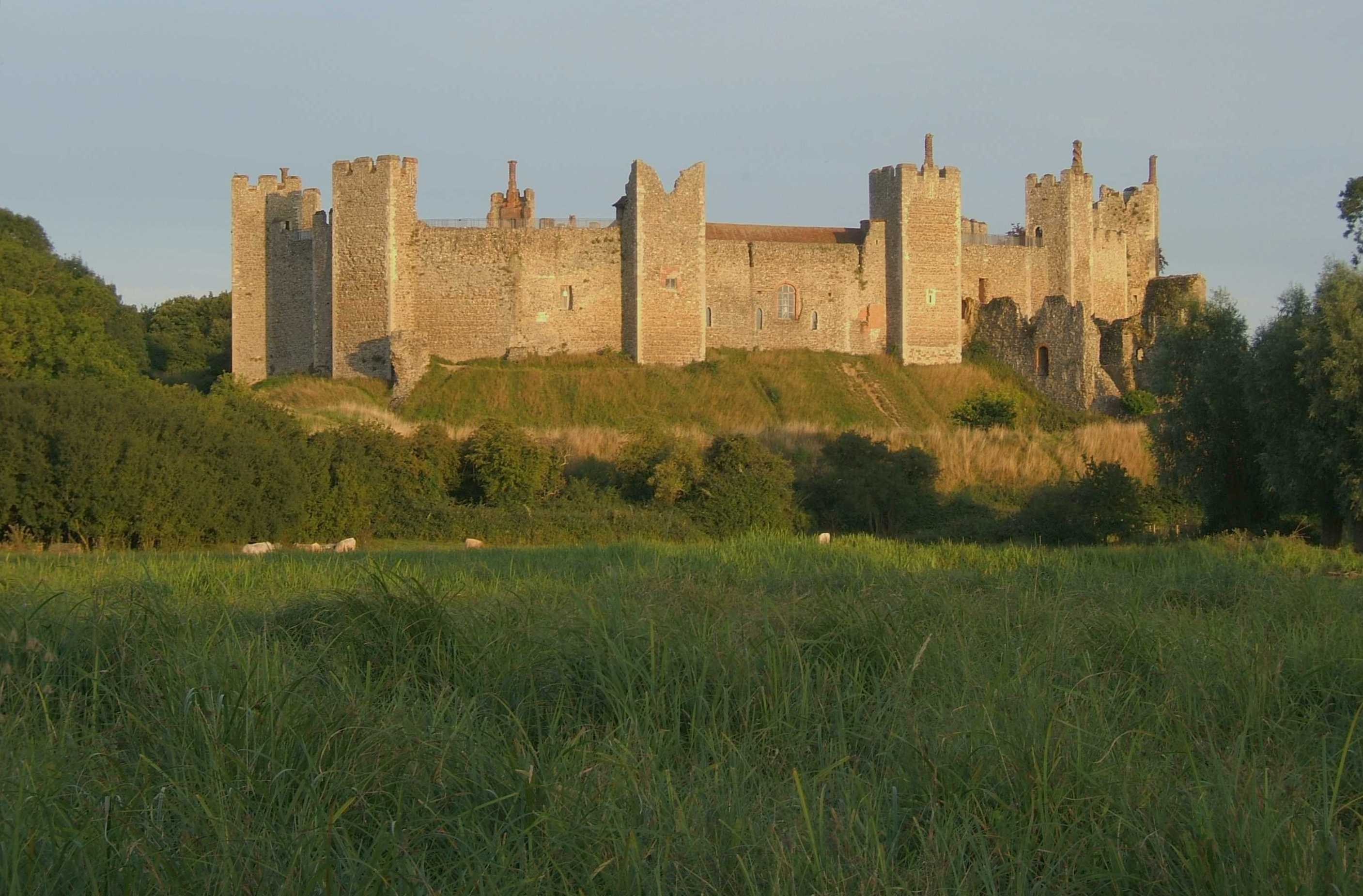 Framlingham Castle is an important castle in the market town of , , . In common with many other buildings in Suffolk, the main walls of the castle are built with . It is unusual, especially for a castle of the time, because it had no or central stronghold, but merely a strong defended by projecting towers which enclosed the domestic buildings.

This Castle is said to have been founded by Raedwald, one of the most powerful kings of the , between A.D. 599 and 624.

It belonged to Edmund, one of the Saxon monarchs of , who, upon the invasion of the Danes, fled from , or Thetford, to this castle; from which being driven, and being overtaken at Hegilsdon, (now , a distance of twelve miles (19 km) from Framlingham) was put to death, being bound to a tree and shot with arrows, A.D. 870. His body, after many years, was removed to a place called Bederics-gueord, now .

The castle remained in the hands of the Danes for fifty years, when they were brought under the obedience of the Saxons. and his son Rufus retained the Castle in their own possession; but the third son of William, Henry I., granted it, with the Manor of Framlingham, to .

It became the seat of the Earls of Norfolk, and continued in this family till , the last of the race, and a man more turbulent than any of his predecessors, died without issue and his estate was compelled to resign it to Edward I.

Edward II gave it to his half-brother, Thomas Plantagenet, surnamed De Brotherton; from whom it descended to . From the Mowbrays it descended to the Howards, Dukes of Norfolk, Sir Robert Howard having married Margaret, daughter of Thomas Mowbray, first Duke of Norfolk.

His son, John Howard, was created and Duke of Norfolk, 28th of June, 1483. He was slain at Bosworth Field, 1485; and his son, Thomas, being attainted, the castle fell into the hands of Henry VII, who granted it to from whom it again returned to the Howards.

, being attainted, it was seized by the king, who dying the same year, his successor, Edward VI, granted it to his sister, the Princess, afterwards Queen Mary. After the death of , when briefly took the throne, Mary found refuge in Framlingham and from there set out, when her fortunes changed, to be crowned in London.

James I granted it to Thomas Howard, first Baron Howard de Walden, youngest son of , created in 1603; but his lordship making his seat, the castle fell into decay, and his son, , sold it in 1635, with the domains, to Sir Robert Hitcham, knight, senior sergeant to James I, who by his will, dated , , bequeathed it to the master and scholars of , in trust for certain charitable uses; the of the living, the castle and the manor, he bequeathed to the college for its own use.

, in his "History of Framlingham", first published in 1798, describes the former state of the structure:

:This castle, containing an , a , and eleven es of land, within the walls now standing, but anciently a much larger quantity before the walls enclosing the same were demolished, was in former ages very fair and beautiful, standing within a park (long since disparked) on the north side of the town; fortified with a double ditch, high banks, rampires, and stone walls convert|44|ft|m high and convert|8|ft|m thick; in these walls were thirteen towers, convert|14|ft|m higher than the walls, built four-square—whereof two were watch-towers, one looking towards the east and the other towards the west: and the rooms within the castle were very commodious and necessary, capable to receive and contain abundance of people.

:In the first court was a deep well, of excellent workmanship, compassed with carved pillars, which supported its leaden roof, and though out of repair, was in being in the year of our Lord 1651. A chapel stood in the same court, adjoining to the east watch-tower; which in the reign of Henry VIII was hung with cloth of arras, of the history of Christ's passion; and a lamp of the value of seven shillings was usually burnt before the altar there. On the side of the court, towards the west watch-tower, was the hall, covered with lead; and over the gate thereof were formerly cut in stone the arms of Brotherton impaled with Bouchier, quartering Louvain, supported with a lion and an eagle. Divers other arms there were in the rest of the buildings, some cut on stone and some on timber, to be seen in the year of our Lord 1651—as Bygods, Brothertons, Seagraves, Mowbrays, Howards, and St. Edmund's, the king and martyr. Between the hall and chancel, fronting the great castle gate, was a large chamber, with several rooms, and a cloyster under it, pulled down A.D. 1700; for which, when standing, in the reign of King Henry VIII., there was one suit of hangings of the story of ; which are supposed to be those still remaining at the seat of Lord Howard, of Walden.

:Out of the castle were three passages—one a postern, with an iron gate, on the east side over a private bridge into the park, where there were arbours, pleasant walks, and trees planted for profit and delight. Another passage was on the west side, leading to a dungeon, and forth on to the mere, now filled up with mire and weeds. But the largest passage and most used was, and is, that towards the south and town; there being formerly a portcullis over that gate, which was made in one of the strongest towers, and a drawbridge without, defended by an half-moon of stone, about a man's height, standing in the year 1657."

One of its most famous residents was Mary Tudor before she was crowned Queen.

It came into the care of the government in 1913, and is now managed by .

Part of 's "" takes place at Framlingham Castle, in tense time in 1553 when the future Queen Mary I took refuge there, not knowing whether she was bound for the throne or the scaffold.