U.S. Route 25 is a north–south United States highway that runs for 750 miles (1,210 km) from Brunswick, Georgia to the Ohio state line in Covington, Kentucky.

Starting at the intersection of US 17/SR 25 in Brunswick, US 25 goes northwest to Jesup then northeast to Ludowicki. It then stays at a general north route through the cities of Statesboro, Millen, Waynesboro and finally Augusta, where it crosses the Savannah River into South Carolina. The overall majority of the route is 4-lane.

Entering South Carolina from Augusta, Georgia, US 25 goes north through downtown North Augusta, connecting with I-20 just outside of town. US 25 goes northwesterly through the cities of Edgefield, Greenwood, and Greenville; going due north at Travelers Rest to the North Carolina state line. Majority of the route is 4-lane, with various sections at expressway grade.

From Interstate 85 southwest of Greenville, South Carolina to Interstate 26 southeast of Hendersonville, North Carolina, US 25, is Corridor W of the Appalachian Development Highway System.[2]

From the South Carolina state line, US 25 becomes a freeway for 9 miles (14 km) before connecting with I-26/US 74 near Flat Rock. Splitting from I-26/US 74 near Fletcher, it goes north through Arden, Biltmore Forest, and downtown Asheville, before reconnecting with I-26 near Woodfin. At Weaverville, US 25 and US 70 travel northwesterly together, through Marshall and Hot Springs into Tennessee.

Continuing for 20 miles (32 km) from the North Carolina state line to Newport, with US-70, US-25 splits into US-25E and US-25W. US-25E goes north through the cities of Morristown, Tazewell, and Harrogate, entering Kentucky via the Cumberland Gap Tunnel. US-25W goes west first to Knoxville then parallels I-75 into Kentucky.

Entering Kentucky from two locations, US 25E goes through the cities of Middlesboro and Barbourville, while US 25W continues its parallels I-75; both converge in Corbin becoming US 25 again (though US 25E continues west as a connector road to I-75). US 25 parallels I-75 throughout Kentucky, connecting the cities of London, Berea, Richmond, Lexington, and Dry Ridge. US 25 ends in Covington at the Ohio state line over the Ohio River; US 42/US 127 continue into Cincinnati. 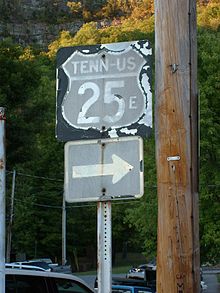 US 25 originally extended northward into Ohio and Michigan before Interstate 75 between Detroit and Cincinnati and Interstate 94 between Detroit and Port Huron, Michigan, made most of US 25 superfluous north of Cincinnati. In Michigan, M-25 continues as the designation of old US 25 between Port Austin and Port Huron. Some old maps disagree on whether the east–west segment of what is now M-25 between Bay City was US 25 or M-25; for that discussion see M-25.

US 25 in Michigan and Ohio was historically known as Dixie Highway, and the road is still so named in some places. It may also be known as "County Road 25-A" through some parts of Ohio.

Old US 25 north of the intersection of US 11W in Tennessee crossed over Clinch Mountain, following a notorious route consisting of considerable elevation gain and many switchbacks, some of which were full hairpin turns.