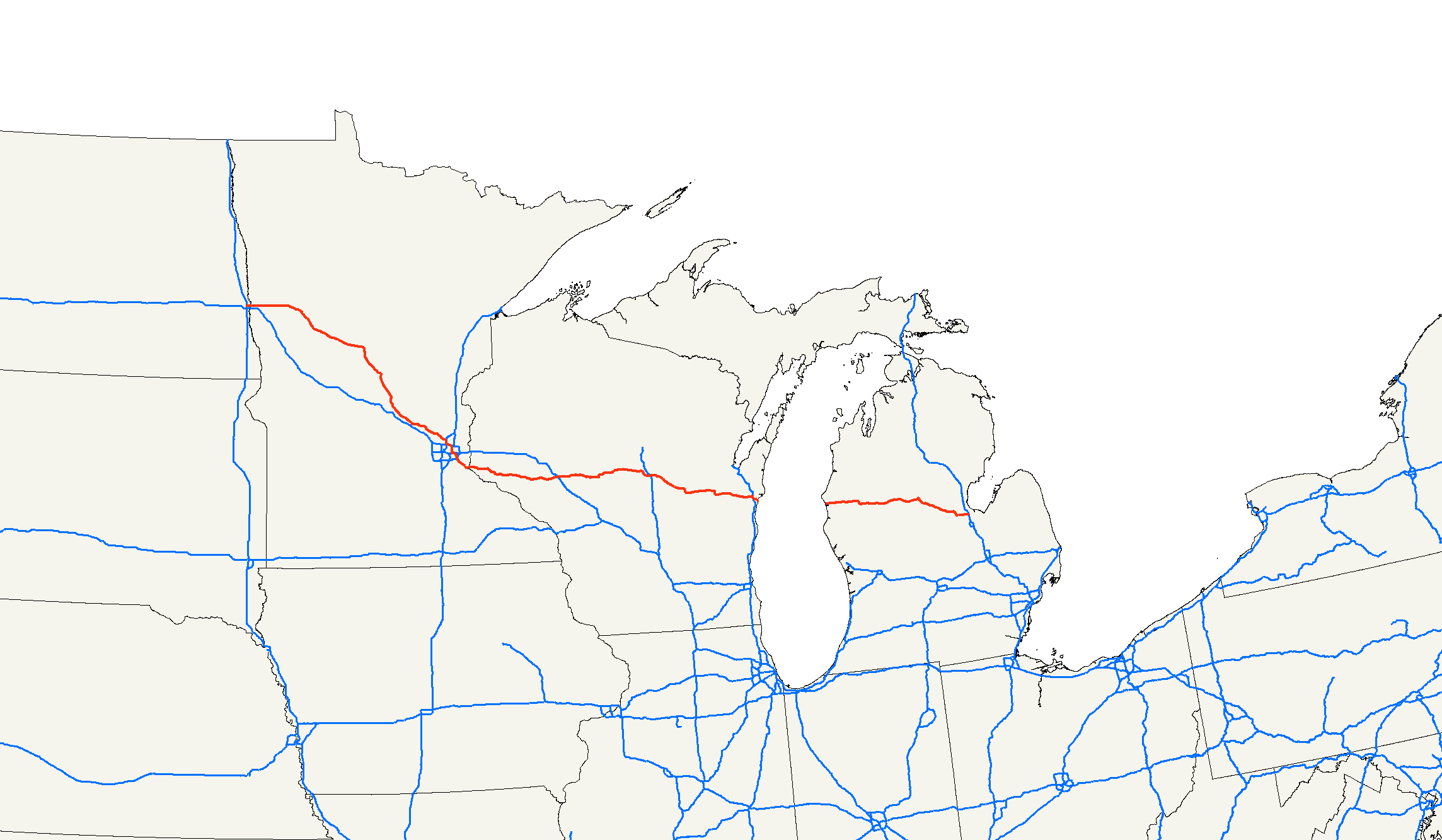 The route crosses by ferry (the ) between , and . US 10 is one of only two US Highways that include a ferry ride in the route (US 9 is the other). Formerly, US 16 also had a ferry connection between , and ; ferry service on this route was restored and now runs as the . All U.S. Highway ferries may be eliminated if long tunnels or bridges are constructed to supplant them.

In the state of , U.S. 10 runs approximately 8 miles (13 km), from to the Red River. It is one of the primary east-west streets in West Fargo and Fargo, and is called Main Avenue for its entire length in North Dakota. At the Red River, U.S. 10 crosses over a bridge to .

US 10 is a major for almost all of its length in .

U.S. Highway 10 enters after it crosses from Manitowoc to Ludington. U.S. 10 is concurrent with U.S. 31 from Ludington to Scottville before Highway 31 heads north. The road then heads east through Baldwin and Reed City before it becomes a west of U.S. 127 near the junction with highway M-115. U.S. 127 and U.S. 10 overlap for a short distance near Clare. U.S. 10 bypasses Midland and terminates at I-75 in Bay City. [cite web|url=http://www.michiganhighways.org/listings/MichHwys10-19.html#US-010|title=US-10|work=MichiganHighways.org|last=Bessert|first=Christopher J.]

US 10 has had alternate routes designated in the past, but none are active as of 2004.

At the eastern end, US 10 originally went south from to on what is now highway M-47. It then joined up with US 23 in Saginaw, and continued south until it split from US 23 north of . It then continued south-east as the to , where it became , now designated as M-1. From there, US 10 continued on an almost straight line to downtown , where it intersected with US 16, US 25, and US 12. It then took a two-block jog, and ended up at the to .

In the 1970's, US-10 was rerouted off in the Detroit area and onto the (formerly Business Spur 696) and Telegraph Road. US-10 was truncated to Bay City, Michigan in 1987 at which point the Lodge Freeway was changed to M-10.

In 1925, US-10 was originally proposed to run from Detroit through , and northwesterly into Wisconsin on what later became US-12.