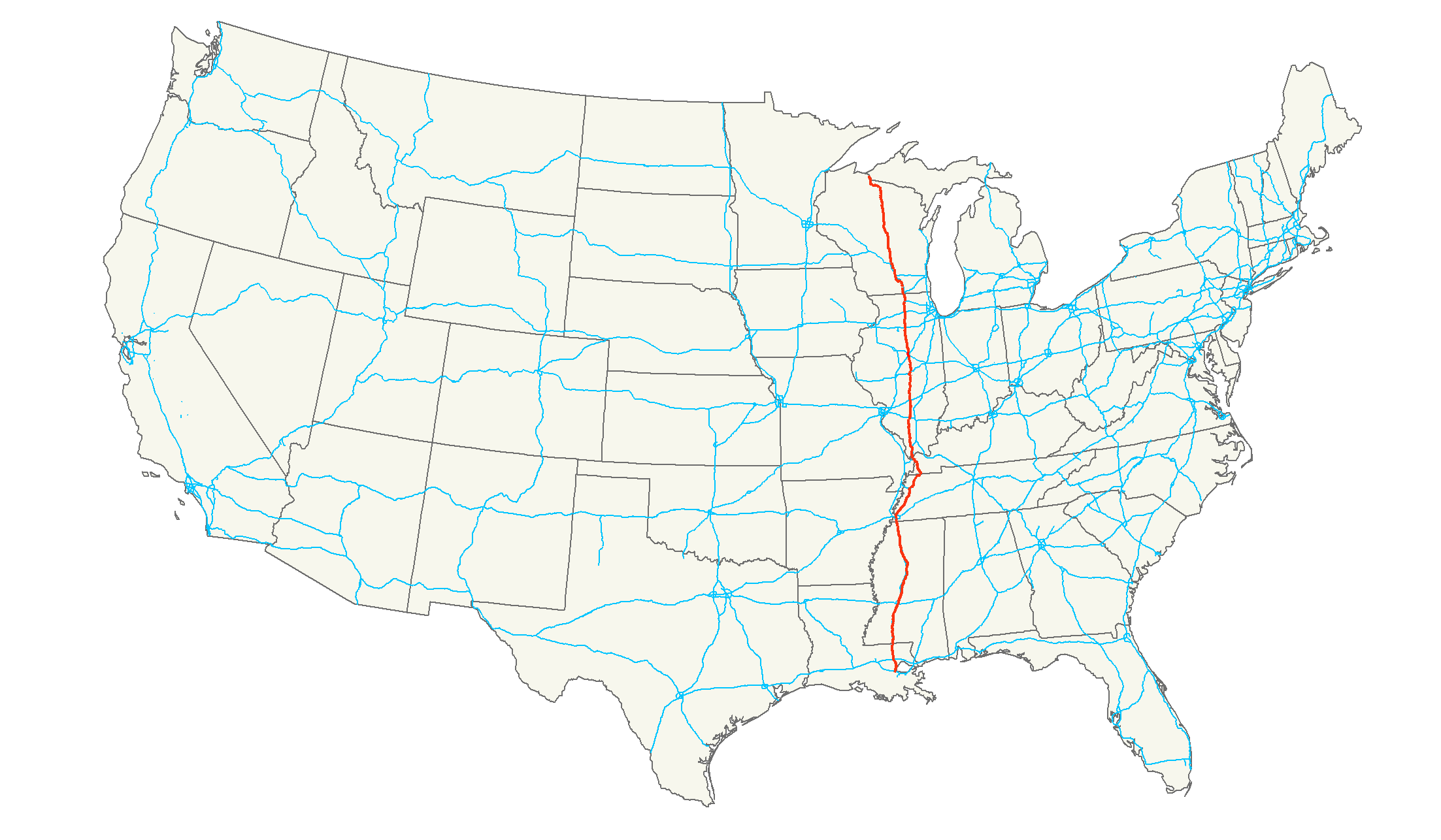 In addition to singing about on his album "", musician also commemorated Highway 51, covering folk song "Highway 51 Blues" on his eponymous album "Bob Dylan".

In , all of U.S. 51 south of South Parkway East was renamed from Bellevue Boulevard to Elvis Presley Boulevard. sits on this highway, in the subdivision of Whitehaven.

In 2004, the six states that Highway 51 traverses banded together as the "Explore Hwy 51 Coalition" to help promote this "All-American Road". The group now offers visitor information for traveling the length of the road.

U.S. 51 crosses the Mississippi/Louisiana border a few miles north of Kentwood and continues to parallel Interstate 55 until it joins I-55 just south of Hammond at Exit 28. From Hammond, the two highways crosses the swamps between Ponchatoula and Laplace on viaducts to Interstate 10, where I-55 ends. U.S. 51 continues southwestward into Laplace where it meets its end at U.S. 61 (Airline Highway).

U.S. 51 enters the Magnolia State from Tennessee at Southaven and parallels to the east for much of its length, except for the section between the Tennessee line and Grenada, where it parallels the highway to the west. From Memphis, U.S. 51 passes through Senatobia, Grenada, Winona and Canton before reaching Jackson.

At the Jackson-Ridgeland line, U.S. 51 overlaps I-55 from Exit 103 (County Line Road) to Exit 96A (Pearl Street) downtown. The split is only temporary as the highway traverses Pearl, Pascagoula and State streets and meets I-55 again at Exit 93 (/I-55/State Street interchange). The Natchez Trace parkway is crossed near Clinton. The Natchez Trace Parkway is a 444 mile (715 km) long parkway, in the form of a limited-access two-lane road, in the southeastern United States. The southern end of the route is in Natchez, Mississippi, at an intersection with Liberty Road; the northern end is northeast of Fairview, Tennessee, in the suburban community of Pasquo, Tennessee, at an intersection with Tennessee 100. The road links the cities of Natchez, Mississippi, and Nashville, Tennessee, via Jackson and Tupelo, Mississippi, and Florence in northwestern Alabama. [1]

The two highways run together until Exit 72 (North Crystal Springs). The highway then parallels the interstate through Hazelhurst, Brookhaven and McComb until it reaches the Louisiana border.

US 51 travels through Memphis and up to the Kentucky border in the Mississippi valley. It is planned to become or be bypassed by through .

U.S 51 enters Kentucky at Fulton, and continues north through the towns of Bardwell and Wickliffe to the Ohio River, where it is multiplexed with U.S highways 60 and 62 over the Ohio.Expand-section|date=June 2008

U.S. 51 is the main route that divides eastern and western Illinois. It is convert|415.95|mi|km|2 long in Illinois.

In the state of , U.S. 51 enters from at Beloit, and continues north to its northern terminus in Hurley where it junctions with US 2.