M-125 is a 19.38-mile (31.19 km) long state trunkline highway in the US state of Michigan. The route is entirely within Monroe County with the southern terminus on the Ohio state border at Toledo and a northern terminus at US Highway 24 (US 24) in Frenchtown Charter Township, 5 miles (8.0 km) north of Monroe.

In Ohio, the road continues as Detroit Avenue, which merges with US 24 two miles (3 km) further south. M-125 runs roughly parallel with and between both US 24 and I-75 its entire length, separated from US 24 by less than a mile most of the way.

There is a 2.9-mile (4.7 km) connector route CONN M-125, also named "Summit Street", running from the first northbound exit off I-75 in Michigan and merging with M-125 just north of Erie.

The present route of M-125 is a relic of the old U.S. Route 25 in Michigan. This highway is not a spur of M-25 and there is not any near connection between the termini of M-25 or M-125. Both M-125 and M-25 have segments that were formerly designated as U.S. Route 25, and is why both these highways exist without any other apparent connection, though state highway numbering in Michigan has no directional, geographical reference like US and Interstate highways do.

The entire highway is in Monroe County.

M-125 Connector is a connector route running through Erie. It connects I-75 with M-125. It is a four lane divided highway for its entire length, named "Summit Street" in Erie. It is known internally to the Michigan Department of Transportation as "Connector 2". It rarely carries signage showing its given name, usually only TO I-75 or TO M-125 depending on the direction traveled and location. 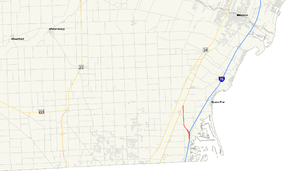