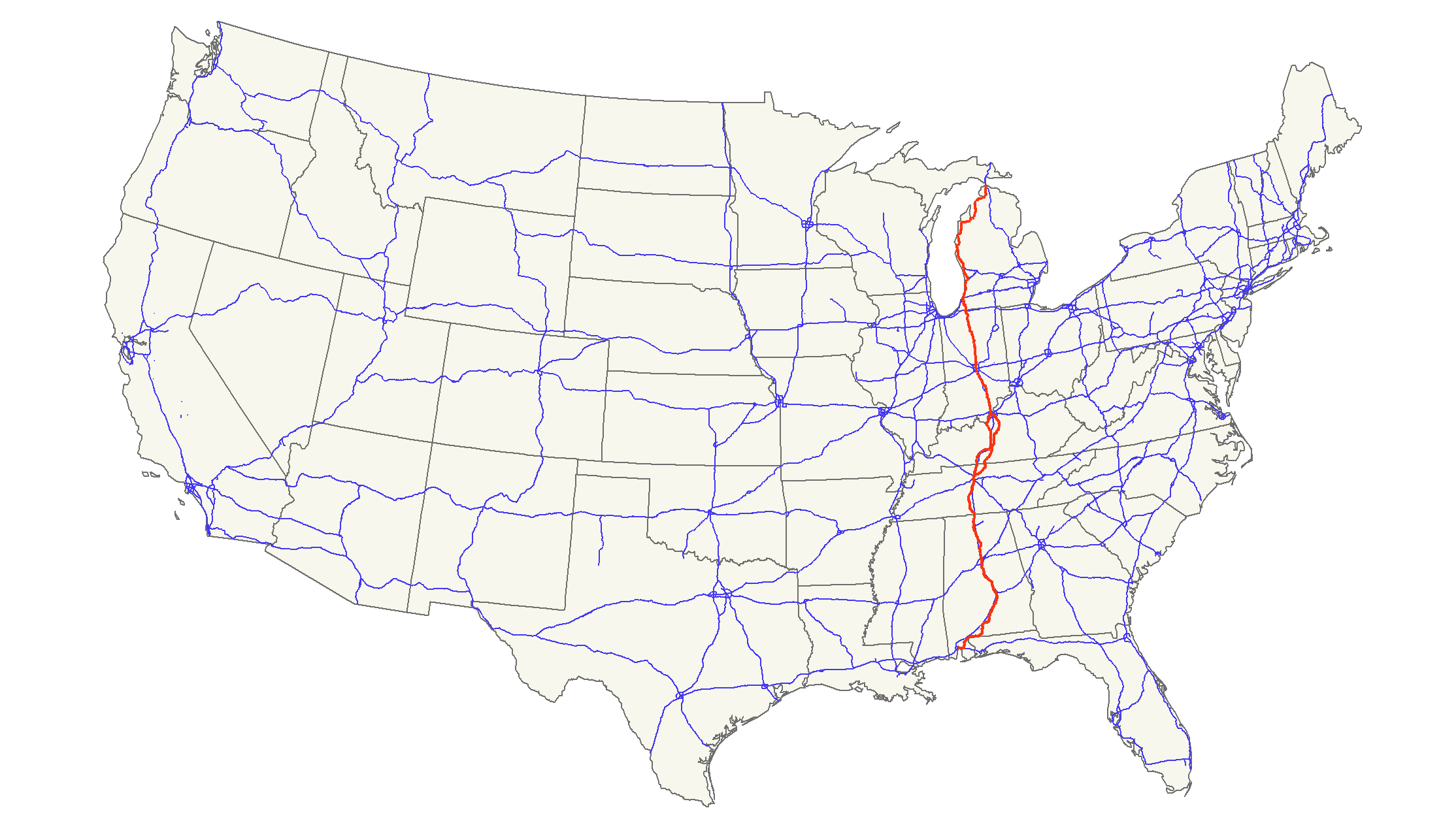 U.S. Route 31 is a long north-south highway connecting northern to southern , with termini at near Mackinaw City, , and and at Spanish Fort, . It formerly reached Mackinaw City along the southern approaches of the (Interstate 75) in the north and downtown Mobile, , in the south.

In downtown Birmingham, the junction with / serves also as the western terminus of . US 31 and US 280 overlap on the Elton B. Stephens (Red Mountain) Expressway, leading to the city's southern suburbs.

US 31 is concurrent with between Blount Springs (exit 289) and Hayden (exit 287) due to I-65 using US 31's right of way to traverse mountainous North Central Alabama. The routes also overlap for 14 miles from mile marker 354 in Athens to mile marker 1 in Ardmore. There are no confirmation signs pairing the two routes in either state on the 14 mile concurrency, aside from the directional signs at the entrance ramps in Athens and Ardmore. The concurrency, however, is shown on official maps of both states. The original routing of US 31 between the two locations still exists as and between Athens and Ardmore.

US 31 is paired with unsigned State Route 3 throughout the state.

The first mile of US 31 in is concurrent to I-65. The route splits into and in Nashville.

and rejoin in at Second Street, and immediately cross the on the .

US 31 overlaps I-65 in Jeffersonville, after crossing the bridge from Kentucky. It then diverges as the access frontage lanes before splitting off north of Jeffersonville at Clarksville and proceeding to . At I-465 on the south side of Indianapolis, US 31 is routed onto I-465 East. This is the closest approach the highway makes to downtown Indianapolis. (Previously the route of the highway through Indianapolis was on East Street, Madison Avenue, North Street, and then Meridian Street. This route was right through downtown Indianapolis.) Upon entering I-465 East, motorists are advised "For US 31 North Follow I-465 East to Exit 31." The highway follows the eastern half of I-465. US 31 exits I-465 (coincidentally at Exit 31) in extreme southern Hamilton County, and continues northward. US 31 then passes through or near Kokomo, Rochester, Plymouth, and Lakeville. As US 31 hits southern South Bend it converges with and proceeds west then north, bypassing South Bend and proceeding into Michigan.

In the 1930s, US 31 continued at Saint Ignace across the Straits of Mackinac, and junctioned with (Mackinac Trail and what later became M-123).

Before the Interstate era, US 31 was a major north-south highway. supplants US 31 and either 31W or 31E as a through route between and Mobile. South of Indianapolis, all segments of US 31 not coinciding with Interstate 65 have been reduced to roads largely of local use. now carries the route of US 31 between , and . All of US 31 between , and Indianapolis, Indiana, is divided highway -- some of it is freeway, including a of . The segment between South Bend and Indianapolis is scheduled for upgrade or replacement with Interstate-standard freeway (see ). Environmental impact studies have shown that the fifth phase of the then-to-be-constructed freeway segment between Napier Avenue near , and I-94 may not be complete until 2015.

The portion of I-75 north of US 31's northern terminus toward the was designated US 31 prior to the 1990s and was US 31's most northern portion to be built to status. Since its truncation at the I-75 junction, however, the most northern segment of US 31 freeway ends near Ludington.

At its southern end, US 31 originally went further west than it currently does, passing through . It crossed via several narrow bridges, including the Admiral Raphael Semmes Bridge, a drawbridge spanning the . It turned north along the east bank of the , crossing the river into Plateau, Alabama, over the Cochrane Bridge (removed), another old drawbridge where the current is now located. It then turned south to end at . It now officially ends at in .

US 31 has three planned relocation sections in Northern Indiana. All are part of the [http://www.in.gov/indot/7039.htm Major Moves Project] designed to convert US 31 to Interstate-grade freeway from South Bend to Indianapolis (see Interstate 67).

[http://www.us31plysb.com/ The New US 31 Plymouth to South Bend] project will relocate US 31 on primarily new alignment from US 30 near Plymouth to US 20/ south of South Bend. Groundbreaking for the project occurred on September 17, 2008

The [http://www.in.gov/indot/div/projects/us31/kokomo/ Kokomo Corridor Project] will cover 14 miles of new highway primarily in Howard County. The new limited-access highway will be east of Kokomo and will have four interchanges at SR 26, Boulevard Street, US 35/SR 22 (Markland Avenue), Touby Pike and US 35 north of Kokomo. Groundbreaking for the project occurred in the afternoon of September 17, 2008, only hours after the groundbreaking for the South Bend-to-Plymouth stretch. [cite news |first=Scott |last=Smith |authorlink= |coauthors= |title=Ceremony for new U.S. 31 corridor draws crowd |url=http://www.kokomotribune.com/local/local_story_261235616.html |work= |publisher= |date=2008-09-17 |accessdate=2008-09-19 ]

[http://www.in.gov/indot/div/projects/us31/hamiltoncounty/ The New US 31 Hamilton County] project will upgrade US 31 to freeway standards from near SR 38 north of Westfield to near the Marion County line and . Construction is to begin in 2010.

* exists between Nashville and , and formerly through , and .
* Old US 31A in Indiana is part of State Road 11. Both sections of US 31A are or were loops connecting to US 31.