Odense (from Odins Vé, meaning "Odin's shrine", referring to the god Odin of Denmark's indigenous Norse mythology), is one of the oldest cities of Denmark and had its 1000th anniversary in 1988. To celebrate this, a forest named "the Thousand Year Forest" (Danish: Tusindårsskoven) was cultivated. The shrine of Saint Canute (Danish: Sankt Knud / Knud den Hellige) in Saint Canute's Cathedral held great attraction for pilgrims throughout the Middle Ages.

In the 16th century, the town was the meeting-place of several parliaments, and down to 1805 it was the seat of the provincial assembly of Funen.

Odense's most famous landmark was Odinstårnet (The Odin Tower) constructed in 1935, as the second-tallest tower in Europe, only surpassed by the Eiffel Tower. Odinstårnet was blown up by a Danish Nazi group in 1944 and has never been rebuilt. However, a miniature model of it now stands in the residential area Odinsparken in the area where the original tower was.

Until the beginning of the Danish industrial revolution, Odense was also the 2nd largest city in modern Denmark, but has in recent times been overtaken by Aarhus. 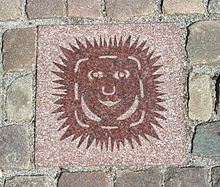 Several large industries are located in or near Odense. Denmark's largest shipyard, Odense Steel Shipyard owned by the A.P. Møller-Mærsk Group is in the neighbouring town Munkebo. The biggest sales auction of vegetables, fruits and flowers (GASA) in Denmark is situated here. The Albani Brewery brews the local Odense Pilsner amongst others.

The commercial national television company TV 2 is based in Odense.

In the south-eastern part of Odense the Rosengårdcentret shopping mall is located. The mall dates from 1971 and is one of the largest in Denmark with 100,000 m2 of commercially used area and 153 stores.[2]

Odense is the commercial hub of Funen, its retail businesses serve the surrounding cities. The city center houses a shopping district with diverse stores.

The city's central location in Denmark makes it one of the national convention and congress centers.

Saint Canute's Cathedral (Danish: Sankt Knuds Kirke) was formerly connected with the great Benedictine monastery of the same name, and is one of the largest and finest buildings of its kind in Denmark. It is constructed of brick in a pure Gothic style. Originally dating from 1081–1093, it was rebuilt in the 13th century. Under the altar lies Canute (Danish: Knud), the patron saint of Denmark, who had planned to conquer England, then ruled by William of Normandy. Canute was slain in an insurrection at Odense in 1086. Odense is also the see of the bishop of Funen. The cathedral has the skeletons of both the Saint/King and his brother on public display. A large fragment of Byzantine cloth is displayed next to the two skeletons. The cathedral also boasts one of Denmark's finest altarpieces, a magnificent triptych by Claus Berg. Kings John (Danish: Hans) and Christian II are buried in the city.

Odense Palace was erected by King Frederick IV, who died there in 1730.

There is a theatre as well as a symphony orchestra, a zoo, and the Funen Village (Den Fynske Landsby) which is an open-air museum with old houses typical of Funen.

The City Hall has a small scar from a battle between Germans and members of the Danish Resistance on 5 May 1945. The city's coat of arms – located above the main entrance to City Hall – is damaged. On closer inspection, it can be seen that the kneecap of Saint Canute was penetrated by a bullet.

The 4 most visited attractions in 2007 were:

By road, Odense connects to Zealand and Jutland by way of the Funish Motorway (Fynske Motorvej), a section of the E20, and to Svendborg on the southern part of Funen by way of the Svendborg Motorway (Svendborgmotorvejen), which comprises the Danish route 9. Other, smaller routes connect Odense to the rest of Funen, with direct links to all coastal towns.

Odense's main railway station Odense station lies on the line between Copenhagen and Jutland, the peninsular mainland. International trains connect the town with Sweden and mainland Europe, i.e. Stockholm. SJ has a direct X2000 train to Stockholm daily,taking 7 hours to the capital city of Sweden. Local and regional trains link Odense to the rest of Denmark. A separate passenger railway (Svendborgbanen) operates between Odense and Svendborg. Formerly, railways connected Odense to most of Funen's coastal cities, but these links were closed down in the 1950s and 1960s.[5] Today, these regional routes are served by buses operated by the public company FynBus, which also operates the town's municipal bus service, connecting the town's suburbs to the city centre.

Accessibility to Odense was greatly increased when the ferry service between the two main Danish islands, Zealand and Funen, was replaced by the Great Belt Bridge – opened in 1997 for rail traffic, 1998 for road traffic. When the bridge opened, it was the second longest suspension bridge in the world. Its construction greatly cut transportation time between Odense and the Danish capital, Copenhagen. Copenhagen can now be reached by trains from Odense in 1 hour and 15 minutes and Aarhus in 1 hour and 35 minutes.

Odense is served by Odense Airport, which operates regular flights only during the summer months.

The H.C. Andersen Marathon and Eventyrløbet is held annually in Odense.

The land area of Odense is 304 km2, with a population density of 611 per km2 (2005 figures from Helsingin Seudun Aluesarjat). The population of Odense city, per January 1 of a given year, according to Danmarks Statistik.

For a full list of twin cities, see Odense Municipality