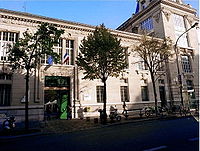 Warrington College of Business at the University of Florida

They include schools of business, business administration, and management. There are four principal forms of business school.

Use of case studies

Some business schools center their teaching around the use of case studies (i.e. the case method). Case studies have been used in graduate and undergraduate business education for nearly one hundred years. Business cases are historical descriptions of actual business situations. Typically, information is presented about a business firm's products, markets, competition, financial structure, sales volumes, management, employees and other factors affecting the firm's success. The length of a business case study may range from two or three pages to 30 pages, or more.

Students are expected to scrutinize the case study and prepare to discuss strategies and tactics that the firm should employ in the future. Three different methods have been used in business case teaching:

When Harvard Business School was founded, the faculty realized that there were no textbooks suitable to a graduate program in business. Their first solution to this problem was to interview leading practitioners of business and to write detailed accounts of what these managers were doing. Of course the professors could not present these cases as practices to be emulated because there were no criteria available for determining what would succeed and what would not succeed. So the professors instructed their students to read the cases and to come to class prepared to discuss the cases and to offer recommendations for appropriate courses of action. The basic outlines of this method are still present in business school curriculum today.

In contrast to the case method some schools use a skills-based approach in teaching business. This approach emphasizes quantitative methods, in particular operations research, management information systems, statistics, organizational behavior, modeling and simulation, and decision science. The goal is to provide students a set of tools that will prepare them to tackle and solve problems.

Another important approach used in business school is the use of Business simulation games that are used in different disciplines such as business, economics, management, etc.

There are also several business school that still rely on the lecture method to give students a basic business education. Lectures are generally given from the professor's point of view, and rarely require interaction from the students unless notetaking is required.

Each year, well-known business publications such as Business Week,[8] The Economist,[9] US News & World Report,[10][11] Fortune, Financial Times,[12] and the Wall Street Journal[13] publish rankings of selected MBA programs that, while controversial in their methodology, nevertheless can directly influence the prestige of schools that achieve high scores.