Drammen
For the town in Wisconsin that is named after the Norwegian city (in 1877), see Drammen, Wisconsin.

Drammen is a city in Buskerud County, Norway. The port and river city of Drammen is centrally located in the eastern and most populated part of Norway.

There are more than 63 000 inhabitants in the municipality, but the city is the regional capital of an area with more than 150,000 inhabitants. Drammen and the surrounding communities are growing more than ever before. The city makes good use of the river and inland waterway called Drammensfjord, both for recreation, activities and housing. No city in the country has received as many awards for environmental and urban development as Drammen: 6 national and 2 international prizes since 2003.[2][3]

Name and Coat of arms

The Old Norse form of the city's name was Drafn, and this was originally the name of the inner part of Drammensfjord. The fjord is, however, probably named after the river Drammenselva (Norse Drǫfn), and this again is derived from drǫfn f 'wave'.[4] The coat-of-arms is from modern times. They were granted on 17 November 1960. The arms are blue with a gray/silver column on top of a foundation of rocks. A key and a sword are crossed in the middle forming an x. It is based upon the old seal dating from 1723 for Bragernes, one of the central parts of Drammen. The motto for Bragernes (in Latin) was In Fide Et Justitia Fortitudo (English: in faith and justice is strength), and the items in the seal are referring to this: key = faith, sword = justice, column on rocks = strength.[5] 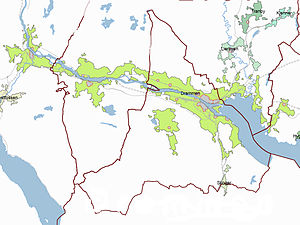 Map of the urban area of Drammen 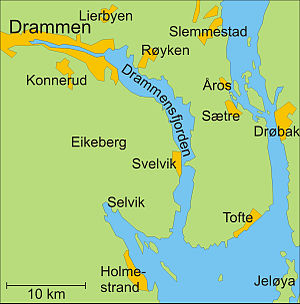 rock carvings at Åskollen and Austad are 6000 to 7000 years old, and are the first signs of human activity in the area. The largest rock carving at Åskollen depicts a moose.

Drammen originally consisted of three small seaports: Bragernes (on the northern side of the Drammenselva river) and Strømsø and Tangen (both on the southern side of the river). For trade purposes, small seaports were placed under market towns. Despite their geographical proximity, Bragernes was placed under Christiania and Strømsø under Tønsberg. For this reason, cooperation between the adjacent seaport towns was almost impossible.

In 1662, a merger was proposed to unite Strømsø and Bragernes to form a market town with the name Frederiksstrøm. The proposal was rejected by Frederick III of Denmark. Bragernes received limited market town rights in 1715, and merged with Strømsø to gain status as a single city on 19 June 1811.[7]

2011 is a special year for Drammen as the city celebrates her 200 years with many city jubilee celebrations.[8]

Its unique geographical location made the city a centre for seafaring, shipbuilding, log driving, timber trade, and (since the 19th century) paper and pulp industries. During the 1960s most of the pulp and paper factories along the Drammenselva were closed down.[citation needed]

Large parts of the city were ruined in the great fire of 12–13 July 1866, which led to the reconstruction of the city centre, including the characteristic town square and Bragernes church.[9]

In 1909, Drammen got the first trolleybus system in Scandinavia, the Drammen trolleybus. The lines ran until 1967. For many years the centre of Drammen suffered from heavy traffic, but in 1970 the European route E18 bridge helped somewhat, and in 1999 the opening of the Bragernes tunnel diverted much of the traffic away from the centre of the city.[citation needed] In recent years, the city centre has seen significant regeneration[citation needed], with the introduction of new housing, shopping facilities, restaurants, cafes and bars, as well as a public pathway along the Drammenselva river.[10][11]

Drammen is one of the larger cities in Norway, and lies about 40 kilometres (25 mi) from the capital of Norway, Oslo. The city centre lies at the end of a valley, on both sides of the Drammenselva river, and where the river meets the Drammensfjord. Drammen is also the main harbor for car and fruit import in Norway.

The Øvre Sund area, situated along Drammenselva, will be regulated by the municipality in order to restore this area's character. The buildings there are from the 18th and 19th century, and contribute, as well as the river and the brewery, to give the city a special identity.[13] In 2008 Drammen won the prestigious prize for the best city development in Europe.[citation needed] 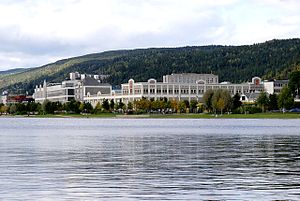 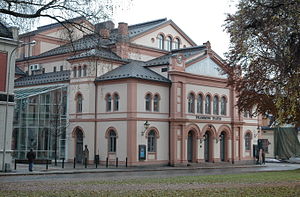 Aass Brewery is the oldest surviving brewery in Norway, and has won acclaim for both its beer and its conservative building. Founded in 1834, the brewery's primary products are soft drinks, beer and aquavit.[14]

The Drammen Museum of Art and Cultural History includes the Marienlyst farm, a manor house from approx. 1770, museum building from 1930 with the museum's administration, permanent exhibitions and collections, and Lyche pavilion from 1990 with the gallery, temporary exhibitions and museum café, Halling yard, with 5 old buildings, the oldest from 1760's. The museum also includes the two largest preserved like farms in Drammen, Gulskogen Manor and Austad farm.[15]

Drammen Theater in Bragernes was built in 1869 and was designed by architect Emil Victor Langlet. The theater was the first modern theater in the country. It was designed in a complex Renaissance style with symmetrical facades and round arched windows. After Drammen Theater suffered total destruction by fire in December 1993, a new theater was rebuilt on the model of the original house. It was finished during February 1997.[16]

The following cities are twinned with Drammen:[17]