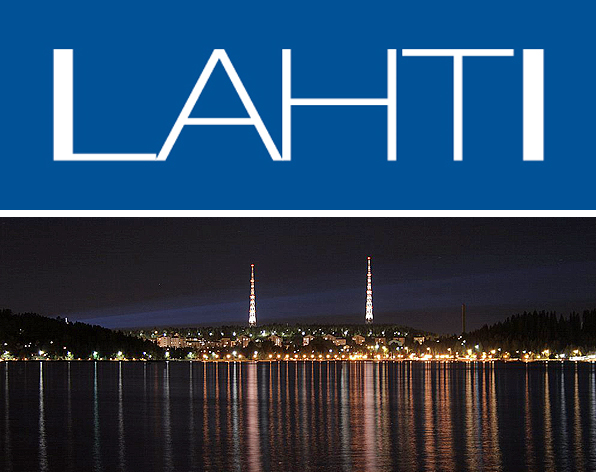 It is the capital of the Päijänne Tavastia region located in the province of .

The symbol of the city depicts a train wheel surrounded by sparkling flames.

Lahti was first mentioned in documents in 1445. In those days, Lahti village was part of the of . The reason why Lahti grew into a village as early as the Middle Ages was partly its good location at the junction of waterways and roads. In 1870, Lahti was a typical village of the region lying along the highway between and Viipuri (now in Russia). According to accounts from the time, the roads in the town center were so narrow that you could barely turn a horse and carriage around, and the buildings were so close to each other that just walking in between them was a squeeze.

The completion of the – railway line in 1870 and the
canal in 1871 turned Lahti into a lively station, and industrial installations began to spring up around it. For a long time, the railway station at Vesijärvi Harbour was the second busiest station in Finland. Craftsmen, merchants, a few civil servants and a lot of industrial workers soon mixed in with the existing agricultural peasantry.

On 19 June 1877, almost the entire village was burned to the ground. However, the accident proved to be a stroke of luck for the development of the place, as it led to the authorities once again resuming their deliberations about establishing a town in Lahti. The village was granted market town rights in 1878 and an empire-style, grid town plan was approved, which included a large market square and wide boulevards. This grid plan still forms the basis of the city center. Most of the buildings were low wooden houses bordering the streets.

Lahti was founded during a period of severe economic recession. The was encumbered by the war against . Boat traffic on Lake and Lake had dropped considerably since the early 1870s. The recession also slowed down the building of the township: land would not sell and often plots were not built on for some time. In its early years, the town with its meager 200 inhabitants was too small to provide and kind of foundation for trade. At the end of the 1890s, Lahti’s increased its efforts to enable Lahti to be turned into a town. In spring 1904, the efforts finally bore fruit as the Senate approved of the application, although it was another eighteen months before finally gave his blessing and issued an ordinance for establishing the town of Lahti.

At the end of 1905, the area that now comprises Lahti accommodated around 8,200 people of whom just under three thousand lived in the town itself. All essential municipal institutions were built in just ten years, including a hospital and a town hall. At the same time, a rapid increase in brick houses was taking place in the center of the town.

Lahti’s dynamic growth period was cut short by the . In the newly independent Finland, the town found itself facing a completely new situation. Industry had to re-orientate itself as the trade with Russia was lost. Lahti continued its growth regardless, and at the start of the 1920s the town gained possession of the grounds of the Lahti Manor, bringing the population up to 8,500 people. Large-scale industrial operations grew rapidly in the 1930s; Lahti was one of Finland’s fastest-growing towns, and before the start of the its population was approaching 30,000.

Through the addition of new areas in 1924, 1933 and 1956, Lahti grew, both in terms of population and surface area. Especially strong was the growth after the wars, when Lahti accepted about 10,000 immigrants from , after the region was surrendered to the , and then later in the 1960 and 70's, when, as a result of mass movement, people moved there from elsewhere in eastern Finland. Complete new districts of the town sprang up. The town continued to grow up until 1975, when the population had reached over 95,000.

Lahti harbors cultural ambitions, and recent years saw the building of a large congress & concert center, the . This has sparked much controversy amongst the population, many of whom feel that the money used for these purposes would be better spent on and . Lahti has perhaps the best known symphony orchestra in Finland, ("Sinfonia Lahti"). It concentrates on Sibelius's music.

Lahti is best known for its annually held World Cup winter games, the (Salpausselän kisat). Ski jumping events of Lahti Ski Games are part of the .

The city also has an (soccer) club, , and an team, the Lahti Pelicans. In July-August 2009, Lahti will host the 18th World Masters Athletics Championships, an outdoor age-group track meet for men and women 35 and over.

In the educational sector, Lahti is modest. Its greatest asset is the highly valued Institute of Design, which is a part of Lahti University of Applied Sciences. The institute has gained international recognition in particular for jewelery and industrial design. Other areas of expertise include metal, woodworking and furniture.

The Faculty of Physical Activity at Lahti University of Applied Sciences offers a Bachelor's degree programme in Sports Studies. The Sports Institute of Finland, which is based in Vierumäki near Lahti, is the most versatile centre of sports education in the country. In addition, Pajulahti Training Center, located in the neighboring town of Nastola, is one the leading sports and training centres in Finland.

As of 31 August 2008 Lahti’s population was 99 816, making it the seventh largest city in Finland by population.

Local buses leave from the market square. The bus stops are on both the Aleksanterinkatu side and the Vapaudenkatu side of the square.

The was named after the city by its discoverer, the