/ˌnɛzˈpɜrs/) (Niimíipu) are Native American people who live in the Pacific Northwest region (Columbia River Plateau) of the United States. An anthropological theory says they descended from the Old Cordilleran Culture, which moved south from the Rocky Mountains and west in Nez Perce lands.[1] The Nez Perce nation currently governs and inhabits a reservation in Idaho.[2] The Nez Perce's name for themselves is Nimíipuu (pronounced [nimiːpuː]), meaning, "The People."[3]

Nez Percé is an exonym given by French Canadian fur traders who were visiting the area regularly in the late 18th century, meaning literally 'pierced nose'. The most common self-designation used today by the Nez Perce is Niimíipu.[3] "Nez Perce" is also used by the tribe itself, the United States Government, and contemporary historians. Older historical ethnological works use the French spelling "Nez Percé," with the diacritic.

In the journals of William Clark, the people are referred to as Chopunnish (/ˈtʃoʊpənɪʃ/). This term is an adaptation of the term cú·pŉitpeľu (the Nez Perce people) which is formed from cú·pŉit (piercing with a pointed object) and peľu (people).[4] When analyzed through the Nez Perce Language Dictionary, the term cúpnitpelu contains no reference to "Piercing with a pointed object" as described by D.E. Walker. The prefix cú- means "in single file." This prefix, combined with the verb -piní, "to come out (e.g. of forest, bushes, ice)". Finally, with the suffix of -pelú, meaning "people or inhabitants of". Put all three parts of the Nez Perce word together now to get cú- + -piní + pelú = cúpnitpelu, or the People Walking Single File Out of the Forest.[5] Nez Perce oral tradition indicates the name "Cuupn'itpel'uu" meant "we walked out of the woods or walked out of the mountains" and referred to the time before the Nez Perce had horses. Nez Perce is a misnomer given by the interpreter of the Lewis and Clark Expedition at the time they first encountered the Nez Perce in 1805. It is from the French, "pierced nose." This is an inaccurate description of the tribe. They did not practice nose piercing or wearing ornaments. The actual "pierced nose" tribe lived on and around the lower Columbia River in the Pacific Northwest and are commonly called the Chinook tribe by historians and anthropologists. The Chinook relied heavily upon salmon as did the Nez Perce and shared fishing and trading sites but were much more hierarchical in their social arrangements.

The Nez Perce area at the time of Lewis and Clark was approximately 17,000,000 acres (69,000 km2). It covered parts of Washington, Oregon, Montana, and Idaho, in an area surrounding the Snake, Salmon and the Clearwater rivers. The tribal area extended from the Bitterroots in the east to the Blue Mountains in the west between latitude 45°N and 47°N.[6]

In 1800, there were more than 70 permanent villages ranging from 30 to 200 individuals, depending on the season and social grouping. About 300 total sites have been identified, including both camps and villages. In 1805 the Nez Perce were the largest tribes on the Columbia River Plateau, with a population of about 6,000. By the beginning of the 20th century, the Nez Perce had declined to about 1,800 because of epidemics, conflicts with non-Indians, and other factors.[7]

The Nez Perce, as many western Native American tribes, were migratory and would travel with the seasons, according to where the most abundant food was to be found at a given time of year. This migration followed a predictable pattern from permanent winter villages through several temporary camps, nearly always returning to the same locations year after year. They were known to go as far east as the Great Plains of Montana to hunt buffalo, and as far west as Celilo Falls to fish for salmon on the Columbia River. They relied heavily on quamash or camas gathered in the region between the Salmon and Clearwater River drainages as a food source.

The Nez Perce believed in spirits called wyakins (Wie-a-kins) which would, they thought, offer a link to the invisible world of spiritual power.[8] The wyakin would protect one from harm and become a personal guardian spirit. To receive a wyakin, a young girl or boy around the age of 12 to 15 would go to the mountains on a vision quest. The person on quest would carry no weapons, eat no food, and drink very little water. There, he or she would receive a vision of a spirit that would take the form of a mammal or bird. This vision could appear physically or in a dream or trance. The wyakin was to bestow the animal's powers on its bearer – for example; a deer might give its bearer swiftness. A person's wyakin was very personal. It was rarely shared with anyone and was contemplated in private. The wyakin stayed with the person until death.

The Nez Perce National Historical Park includes a research center which has the park's historical archives and library collection. It is available for on-site use in the study and interpretation of Nez Perce history and culture.[9]

Legend of their origin

William Clark was the first American to meet any of the tribe. While he, Meriwether Lewis and their men were crossing the Bitterroot Mountains they ran low of food, and Clark took six hunters and hurried ahead to hunt. On September 20, 1805, near the western end of the Lolo Trail, he found a small camp at the edge of the camas-digging ground that is now called Weippe Prairie. The explorers were favorably impressed by those whom they met; and, as they made the remainder of their journey to the Pacific in boats, they entrusted the keeping of their horses to "2 brothers and one son of one of the Chiefs." One of these Indians was Walammottinin (Hair Bunched and Tied but more commonly known as Twisted Hair), who became the father of Timothy, a prominent member of the "Treaty" faction in 1877. The Indians were, generally, faithful to the trust; and the party recovered their horses without serious difficulty when they returned.[11]

The Nez Perce split into two groups in the mid-19th century, with one side accepting coerced relocation to a reservation and the other refusing to give up their fertile land in Washington and Oregon. On October 5, 1877, Chief Joseph of the Nez Perce Nation surrendered to units of the U.S. Cavalry near Chinook in the north of what is now Montana. Before this surrender, the Nez Perce fought a cunning strategic retreat toward refuge in Canada from about 2,000 soldiers. This surrender, after fighting 13 battles and going about 1,700 miles (2,740 km) toward Canada, marked the last great battle between the U.S. government and an Indian nation.[12] After surrendering, Chief Joseph stated his famous quote: "Hear me, my chiefs, I am tired. My heart is sick and sad. From where the sun now stands, I will fight no more forever."(Flight of the Nez Perce) The flight path is reproduced by the Nez Perce National Historic Trail.[13] The annual Cypress Hills ride in June commemorates the Nez Perce people's crossing into Canada.[14] 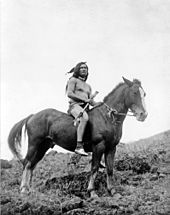 The Nez Perce tribe began a breeding program in 1994 based on crossbreeding the Appaloosa and a Central Asian breed called Akhal-Teke to produce the Nez Perce Horse.[15] This is a program to re-establish the horse culture of the Nez Perce, a proud tradition of selective breeding and horsemanship that was destroyed in the 19th century. The breeding program was financed by the United States Department of Health and Human Services, the Nez Perce tribe and a nonprofit group called the First Nations Development Institute (based in Washington D.C.), which promotes such businesses in Indian country. These horses that the Nez Perce had developed were known for their speed.

Fishing is an important ceremonial, subsistence, and commercial activity for the Nez Perce tribe. Nez Perce fishers participate in tribal fisheries in the mainstem Columbia River between Bonneville Dam and McNary Dam. The Nez Perce also fish for spring/summer Chinook salmon and Steelhead in the Snake River and its tributaries. The Nez Perce tribe runs the Nez Perce Tribal Hatchery on the Clearwater River as well as several satellite hatchery programs.