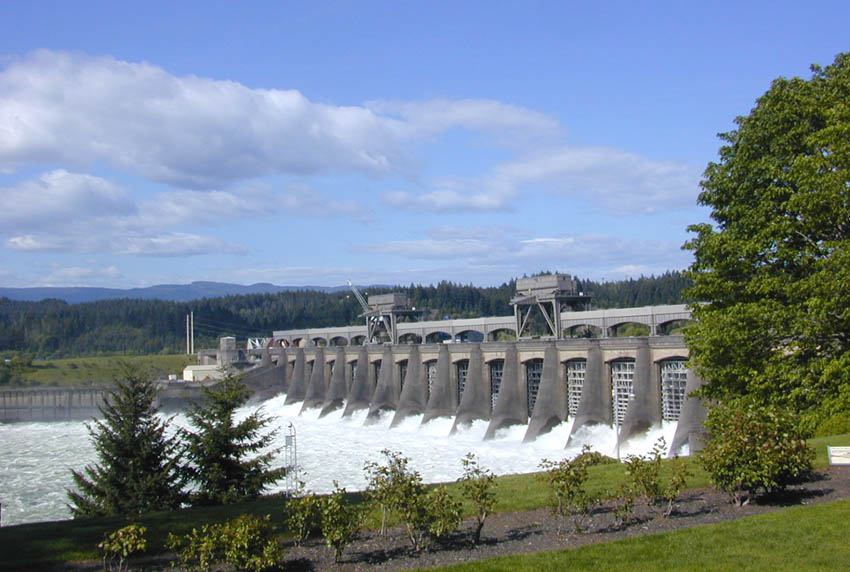 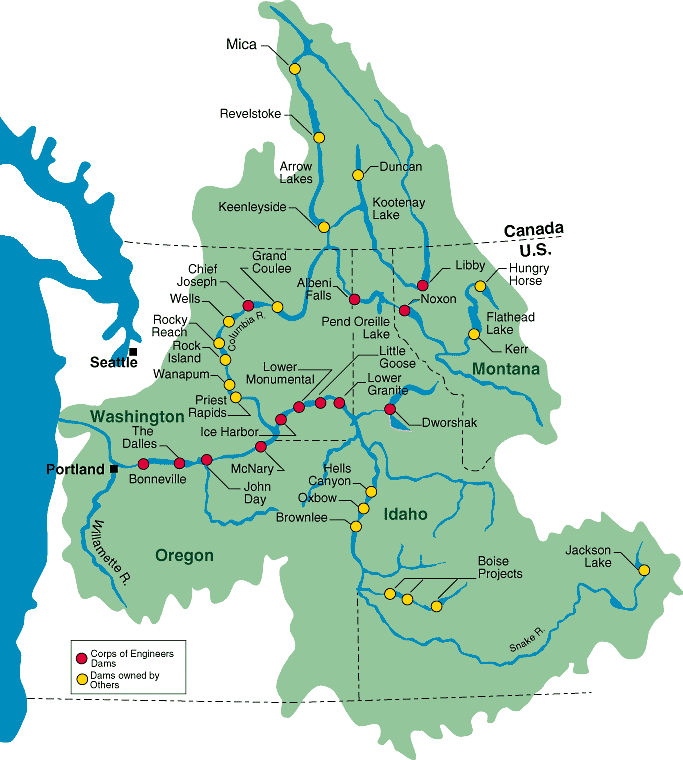 In 1896, prior to this damming of the river, the were constructed, allowing ships to pass the , located several miles upstream of Bonneville.

During the , the Army Corps of Engineers constructed a new lock and a powerhouse which were on the south (Oregon) side of , and a on the north (Washington) side. These were started in 1933 and finished in 1937.

Both the cascades and the old lock structure were submerged by the Bonneville Reservoir, also known as Lake Bonneville, the reservoir that formed behind the dam. The original navigation lock at Bonneville was opened in 1938 and was, at that time, the largest single-lift lock in the world.Fact|date=January 2008

In his song "", the folk singer, , spoke of Bonneville as follows:

At the time, America was in the , and the dam's construction provided jobs and other economic benefits to the . Inexpensive gave rise, in particular, to a strong industry.

A second powerhouse (and dam structure) was started in 1974 and completed in 1981. The second powerhouse was built by widening the river channel on the Washington side, creating Cascades Island between the new powerhouse and the original spillway. The combined electrical output of the two power houses at Bonneville is now over 1 million kilowatts.

Despite its world record size in 1938, Bonneville Lock became the smallest of seven locks built subsequently at different locations upstream on the Columbia and Snake Rivers; eventually a new lock was needed at Bonneville. This new structure was built on the Oregon shore, opening to ship and barge traffic in 1993. The old lock is still present, but is no longer used.

The dam features s to help native and get past the dam on their journey upstream to spawn. The large concentrations of fish swimming upstream serves as a tourist attraction during the spawning season. s are also attracted to the large number of fish, and are often seen around the base of the dam during the spawning season. By 2006, the growing number of crafty sea lions and their impact on the salmon population have become worrisome to the Army Corps of Engineers and environmentalists. [ [http://news.yahoo.com/s/ap/20060331/ap_on_sc/smart_sea_lion ] dead link|date=October 2008] [ [http://www.nwd-wc.usace.army.mil/tmt/agendas/2006/0405_SEALS.pdf Slide 1] ] Historically, s such as sea lions and seals hunted salmon in the Columbia River as far as The Dalles and , convert|200|mi|km from the sea, as remarked upon by people such as George Simpson in 1841.

The dam blocked the migration of to their upstream spawning areas. Sturgeon still spawn in the area below the dam and the lower Columbia River supports a healthy sturgeon population. Small very depressed populations of white sturgeon persist in the various reservoirs upstream.

The fish hatchery and dam are open year round from 9:00am to 5:00pm. It is best to visit the dam in the months of April through September when the salmon are more abundant.

* , which preceded the construction of the dam
* , a much larger dam far upstream on the Columbia River
* , a U.S. Senator from Oregon who was instrumental in passing legislation to build the dam