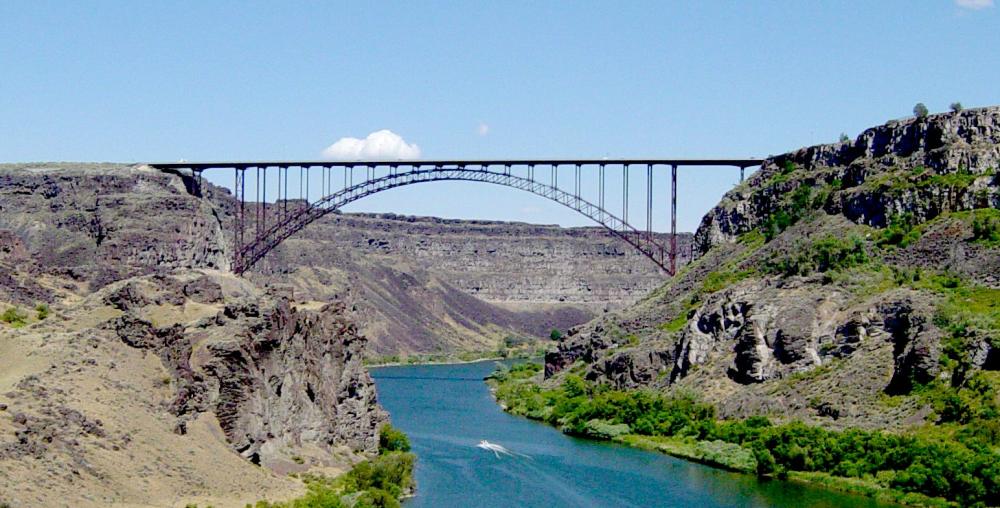 The Snake River is a major of the in the s of , , , and . The river's length is convert|1040|mi, its watershed drains convert|108000|sqmi|km2|-3, and the average discharge at its mouth is convert|56900|ft3/s|sigfig=3. The river flows from its source in through a series of mountain ranges, canyons, and plains.

The Snake is the largest tributary of the Columbia River, with a mean discharge of convert|50000|ft3/s|sigfig=2, [http://www.idahohistory.net/Reference%20Series/0294.pdf] or convert|56900|ft3/s|sigfig=3 according to the , the 12th largest in the United States.

For much of its course the Snake River flows through the , a physiographic province extending from eastern Oregon through western and central Idaho into northwest Wyoming. Much of the Snake River Plain is high desert and semi-desert at elevations averaging around convert|5000|ft|sigfig=2. Many of the rivers in this region have cut deep and meandering canyons. West of Twin Falls, the plain is mainly covered with stream and lake sediments. During the , lava dams created Lake Idaho, which covered a large portion of the Snake River Plain between Twin Falls and Hells Canyon. This large lake expanded and contracted several times before finally receding in the early . In more recent geologic time, about 14,500 years ago, glacial spilled catastrophically into the Snake River Plain. The flood carved deep into the land along the Snake River, leaving deposits of gravel, sand, and boulders, as well as a scabland topography in places. Results of this flood include the falls and rapids from Twin Falls and Shoshone Falls to Crane Falls and Swan Falls, as well as the many "potholes" areas. [Snake River Plain geology from cite book |last= Orr |first= Elizabeth L. |coauthors= William N. Orr |title= Geology of the Pacific Northwest |year= 1996 |publisher= |isbn= 0-07-048018-4 |chapter= Snake River Plain and Owyhee Uplands]

The Snake River Aquifer, one of the most productive s in the world, underlies an area of about convert|10000|sqmi|sigfig=2 in the Snake River Plain. Differences in elevation and rock permeability result in many dramatic springs, some of which are artesian. The comes from the Snake River itself as well as other streams in the region. Some streams on the northern side of the Snake River Plain, such as the Lost River are completely absorbed into the ground, recharging the aquifer and emerging as springs that flow into the Snake River in the western part of the plain. The of the basalt rocks that make up the aquifer is very high. In places water exits the Snake and Lost rivers into ground conduits at rates of nearly convert|600|ft3/s|m3/s. [Snake River Plain aquifer information from cite book |last= Orr |first= Elizabeth L. |coauthors= William N. Orr |title= Geology of the Pacific Northwest |year= 1996 |publisher= |isbn= 0-07-048018-4 |pages= 248-249] Due to stream modifications and large-scale irrigation, most of the water that used to recharge the aquifer directly now does so in the form of irrigation water drainage.

The Snake originates near the in in northwest and flows south into in , then south through and past the town of Jackson. The river then flows west through Wyoming's Snake River Canyon and exits Wyoming at Alpine Junction, where it enters at the Palisades Reservoir.

The Snake River then swings south and west in an arc across southern-central Idaho, following the Snake River Plain. It passes through the city of Idaho Falls and by Blackfoot in a region of irrigated agriculture. North of the the river is impounded by the . The dam and reservoir are part of the Minidoka Irrigation Project managed by the . The Portneuf River joins the Snake at the reservoir. Downriver from the dam is , a site on the path of the old .

After receiving the waters of , the Snake River enters another reservoir, , impounded by , run by the Bureau of Reclamation mainly for irrigation purposes. Another dam, and its reservoir, Milner Reservoir, lie just downriver from Minidoka Dam. Below that is the city of Twin Falls, after which the river flows into Idaho's Snake River Canyon (the site of 's stunt) over and under the .

After exiting the Snake River Canyon, the Snake receives the waters of more tributaries, the and the . After passing the , the Snake flows toward Boise and the Idaho-Oregon border. After receiving numerous tributaries such as the , , , , , and Powder River, the Snake enters .

In Hells Canyon the Snake River is impounded by three dams, , , and (which completely blocks the migration of fish [ [http://www.nwcouncil.org/history/SnakeRiver.asp Snake River ] ] ), after which the river is designated a as is flows through Hells Canyon Wilderness. In this section of the river, the Salmon River, one of the largest tributaries of the Snake, joins. Just across the Washington state line, another large tributary, the joins the Snake.

As the Snake flows north out of Hells Canyon, it passed the cities of and , where it receives the Clearwater River. From there the Snake River swings north, then south, through southeast Washington's region, before joining the near the Tri-Cities. In this final river reach there are four large dams, , , , and . These dams, built by the serve as hydroelectric power sources as well as ensuring barge traffic navigation to Lewiston, Idaho.

The name "Snake" possibly derived from an S-shaped (snake) sign which the Shoshone Indians made with their hands to mimic swimming salmon.

People have been living along the Snake River for at least 11,000 years. Daniel S. Meatte divides the prehistory of the western Snake River Basin into three main phases or "adaptive systems". The first he calls "Broad Spectrum Foraging", dating from 11,500 to 4,200 years before present. During this period people drew upon a wide variety of food resources. The second period, "Semisedentary Foraging", dates from 4,200 250 years before present and is distinctive for an increased reliance upon fish, especially salmon, as well as food preservation and storage. The third phase, from 250 to 100 years before present, he calls "Equestrian Foragers". It is characterized by large horse-mounted tribes that spent long amounts of time away from their local foraging range hunting bison. [ [http://imnh.isu.edu/digitalatlas/arch/Prehist/Pre_Summ/SW_Snake/SW_Snake.htm Summary of Western Snake River Prehistory] , Digital Atlas of Idaho] In the eastern Snake River Plain there is some evidence of Clovis, Folsom, and dating back over 10,000 years ago. By the protohistoric and historic era, the eastern Snake River Plain was dominated by and other "Plateau" culture tribes. [ [http://imnh.isu.edu/digitalatlas/arch/Prehist/Pre_Summ/SE_Snake/SEPreh.htm Southeastern Snake River Basin Prehistory] , Digital Atlas of Idaho]

Early fur traders and explorers noted regional trading centers, and archaeological evidence has shown some to be of considerable antiquity. One such trading center in the Weiser area existed as early as 4,500 years ago. The may have contributed to the historic s, but it is not well understood. Another poorly understood early cultural hearth is called the Midvale Complex. The introduction of the horse to the Snake River Plain around 1700 helped in establishing the Shoshone and Northern cultures. [ [http://imnh.isu.edu/digitalatlas/arch/Prehist/Pre_Summ/SW_Snake/SW_Snake.htm Western Snake River Prehistory] , Digital Atlas of Idaho]

On the Snake River in southeastern Washington there are several ancient sites. One of the oldest and most well-known is called the Marmes Rockshelter, which was used from over 11,000 years ago to relatively recent times. The was flooded in 1968 by , the Lower Monumental Dam's reservoir. [ [http://www.historylink.org/essays/output.cfm?file_id=7970 Marmes Rockshelter] , HistoryLink]

Other cultures of the Snake River's basin's protohistoric and historic periods include the , , Walla Walla, Palus, Bannock, and many others.

The of 1804-1806 was the first major U.S. exploration of the lower portion of the Snake River, and the Snake was once known as the Lewis River. Later American exploratory expeditions, which explored much of the length of the Snake River, included the of 1810-1812, in 1832, and in 1833-1834. The British and, after 1821, sent large trapping and trading expeditions to the upper Snake River and its tributaries. These annual expeditions began in 1817 and continued for about 30 years. They ranged widely throughout today's southern Idaho, western Wyoming, and northern Utah, in the process exploring the region. Many of the rivers and mountains have French names, reflecting the employment of French-Canadian voyageur by the British companies. The policy of the Hudson's Bay Company's was to deplete the region of fur bearing animals as quickly as possible, so as to make it impossible for American traders to operate there. This goal was largely successful. American traders could not compete in the Snake River country. In contrast, the Hudson's Bay Company found the Snake River expeditions very profitable. [cite book |last= Mackie |first= Richard Somerset |title= Trading Beyond the Mountains: The British Fur Trade on the Pacific 1793-1843 |year= 1997 |publisher= University of British Columbia (UBC) Press |location= Vancouver |isbn= 0-7748-0613-3 |pages= pp. 21, 64] By the middle 19th century, the had been established, generally following much of the Snake River.

Many s have been built on the Snake River and its tributaries, mainly for purposes of providing water and hydroelectric power and ranging in size from small s to major high dams.

Large dams include four on the lower Snake, in Washington, built and operated by the U.S. Army Corps of Engineers: Ice Harbor, Lower Monumental, Little Goose, and Lower Granite. These dams were built from 1962 to 1975 for hydroelectric power and navigation. They are equipped with locks, making the river as far as Lewiston an extension of the Columbia River's barge navigation system. [cite news
title= Pressure builds on Snake River dams
date=April 15, 2007
author=Erik Robinson
url=http://docs.newsbank.com/openurl?ctx_ver=z39.88-2004&rft_id=info:sid/iw.newsbank.com:NewsBank:VCBB&rft_val_format=info:ofi/fmt:kev:mtx:ctx&rft_dat=11976D3A7A164128&svc_dat=InfoWeb:aggregated4&req_dat=8CE642B8CA5C4083BE84A2539D6E1A73
work=The Columbian] The four dams were modified in the 1980s to better accommodate fish passage. [ [http://www.nwcouncil.org/library/2003/2003-20/hydro.htm 20 Years of Progress: Hydropower ] ]

Upriver, in the Hells Canyon region, there are three large hydroelectric dams, operated by Idaho Power, a private utility company. Collectively named the Hells Canyon Project, the three dams are, in upriver order: , , and . Not having fish ladders, they are the first total barrier to upriver fish migration.

Near the city of Twin Falls two waterfalls have been modified for hydropower, Shoshone Falls and Twin Falls. Collectively called the Shoshone Falls Project, they are old and relatively small dams, currently operated by Idaho Power. Above Twin Falls is , built in 1905 for irrigation and rebuilt in 1992 with hydroelectric production added. The dam and irrigation works are owned by Milner Dam, Inc, while the powerplant is owned by Idaho Power.

Above Milner Dam, most of the large dams are projects of the U.S. Bureau of Reclamation, built mainly for irrigation, some are hydroelectric as well. All part of the Bureau's Minidoka Project, the dams are: (built 1909), (1927), (1957), and on (1911). These dams, along with two others and numerous irrigation canals, supply water to about 1.1 million acres (4,500 km²) in southern Idaho. [ [http://www.usbr.gov/dataweb/html/minidoka.html Minidoka Project] , USBR]

The city of Idaho Falls operates the remaining large dam on the Snake River, , along with several smaller associated dams, for hydroelectric and irrigation purposes.

There are many other dams on the tributaries of the Snake River, built mainly for irrigation. They are mainly operated by the Bureau of Reclamation or local government and private owners.

While the many dams in the Snake River basin have transformed the region's economy, they have also had an adverse environmental effect on wildlife, most notably on wild migrations. Since the 1990s, some conservation organizations and fishermen are seeking to restore the lower Snake River and Snake River salmon and steelhead by removing four federally-owned dams on the lower Snake River. [cite news
title=Breach Snake River dams, says ex-Secretary Babbitt
date=October 7, 2006
first=Erik
last=Robinson
work=The Columbian
url=http://0-docs.newsbank.com.catalog.multcolib.org:80/openurl?ctx_ver=z39.88-2004&rft_id=info:sid/iw.newsbank.com:NewsBank:VCBB&rft_val_format=info:ofi/fmt:kev:mtx:ctx&rft_dat=114B0DB1A7231E88&svc_dat=InfoWeb:aggregated4&req_dat=0D10F2CADB4B24C0] [cite news
title= Changing currents - In the endless fray over fish, dreams and decisions drift
date=March 5, 2006
author=Lynda V. Mapes
work=The Seattle Times
url=http://0-docs.newsbank.com.catalog.multcolib.org:80/openurl?ctx_ver=z39.88-2004&rft_id=info:sid/iw.newsbank.com:NewsBank:STIW&rft_val_format=info:ofi/fmt:kev:mtx:ctx&rft_dat=1103F38CBAA7A3E8&svc_dat=InfoWeb:aggregated4&req_dat=0D10F2CADB4B24C0]

Among the negative consequences of the lower Snake River's navigational slackwater reservoirs are the flooding of historic and archaeological sites, the stilling of once famous rapids, the slowing of currents and an associated rising of water temperature, and a general decline in the ability of wild fish to migrate up and down the river.