President Harding proposed a Department of Education and Welfare as early as 1923, and similar proposals were also recommended by subsequent presidents, but for various reasons were not implemented.[2] It[clarification needed] was only enacted thirty years later as part of the authority, in which the president was allowed to create or reorganize bureaucracies as long as neither house of Congress passed a legislative veto. This power to create new departments was removed after 1962, and in the early 1980s the Supreme Court declared legislative vetoes unconstitutional.

In 1995, the Social Security Administration was removed from the Department of Health and Human Services, and established as an independent agency of the executive branch of the United States Government.

HHS is administered by the Secretary of Health and Human Services, who is appointed by the President with the advice and consent of the Senate. The United States Public Health Service (PHS) is the main division of the HHS and is led by the Assistant Secretary for Health. The current Secretary, Kathleen Sebelius is the Vice-Chair of the United States Interagency Council on Homelessness, and the Department of Health and Human Services is a member of the Council, which is dedicated to preventing and ending homelessness in America.

The United States Public Health Service Commissioned Corps, the uniformed service of the PHS, is led by the Surgeon General who is responsible for addressing matters concerning public health as authorized by the Secretary or by the Assistant Secretary of Health in addition to his or her primary mission of administering the Commissioned Corps. The Office of Inspector General (OIG) investigates criminal activity for HHS. The special agents who work for OIG have the same title series "1811", training and authority as other federal criminal investigators, such as the FBI, ATF, DEA and Secret Service. However, OIG Special Agents have special skills in investigating white collar crime related to Medicare and Medicaid fraud and abuse. Organized crime has dominated the criminal activity relative to this type of fraud.

HHS-OIG investigates tens of millions of dollars in Medicare fraud each year. In addition, OIG will continue its coverage of all 50 States and the District of Columbia by its multi-agency task forces (PSOC Task Forces) that identify, investigate, and prosecute individuals who willfully avoid payment of their child support obligations under the Child Support Recovery Act.

HHS-OIG agents also provide protective services to the Secretary of HHS, and other department executives as necessary.

In 2002, the department released Healthy People 2010, a national strategic initiative for improving the health of Americans.

In June 2010 the Department of Health and Human Services created the strengthening communities fund as part of the American Recovery and Reinvestment act. The fund was appropriated $50 million to be given as grants to organizations in the United States who were engaged in Capacity Building programs. The grants were given to two different types of capacity builders:[5]*State, Local and Tribal governments engaged in capacity building- grants will go to state local and tribal governments to equip them with the capacity to more effectively partner with faith-based or non-faith based nonprofit organizations. [6]

and building up nonprofit organization’s abilities to tackle economic problems. State, Local and Tribal governments can receive up to $250,000 in 2-year-grants

The functions of the Health and Human Services (HHS) consist of a few very important roles in our nation. They create a healthy environment for all Americans and try to do as much as possible to make sure that food are safe and healthy. They make sure food is safe to eat and they also try to reduce obesity. The HHS consists of many different agencies such as the Food and Drug Administration (FDA).

Office of the Secretary (OS) 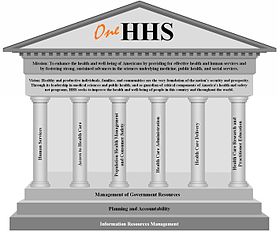 The Department of Health and Human Services' budget includes more than 300 programs, covering a wide spectrum of activities. Some highlights include:

The 2010 United States federal budget establishes a reserve fund of more than $630 billion over 10 years to finance fundamental reform of the health care system. [10]