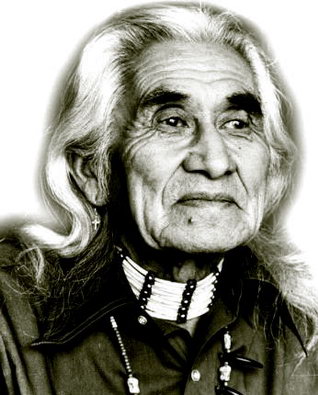 caption =
birthdate = ,
birthplace = ,
deathdate = ,
deathplace = Chief Dan George, OC (, &ndash;, ) was a chief of the Tsleil-Waututh, a people located in , . He was also an -nominated actor and an author.

Dan George was born as Geswanouth Slahoot on a in . His English name originally was Dan Slaholt. His last name was changed to George when he entered a at the age of 5. George worked at a number of different jobs, including as a longshoreman, construction worker and school bus driver. He was chief of the Tsleil-Waututh from 1951 to 1963.

In 1960, when he was already 60 years of age, he got his first job acting in a series, "Cariboo Country", as the character "Ol' Antoine". He performed the same role in a Walt Disney Studios movie, "", adapted from an episode in this series (based on "Breaking Smith's Quarter Horse", a novella by ). At the age of 71, George won several awards for his role in the film "", including a nomination for the . He continued to act in other films, such as "", "" and "", and on television, including a role in the miniseries "Centennial", based on the book by .

George acted the role of Rita Joe's father in 's stage play, "", in performances at , the in and .

During his acting career, Chief Dan George always worked to promote better understanding by non-aboriginals of the First Nations people. His soliloquy, "Lament for Confederation", [ [http://www.ammsa.com/buffalospirit/2003/footprints-DanGeorge.html (full text)] ] a riveting indictment of the appropriation of native territory by white colonialism, was performed at the city of Vancouver's celebration of the in 1967. This speech is credited with escalating native political activism in Canada, as well as touching off widespread pro-native sentiment among non-natives.