/məˈkɑː/, from the Klallam name for the tribe, màq̓áʔa)[1] are a Native American people from the northwestern corner of the continental United States in Washington. The Makah tribe lives in and around the town of Neah Bay, Washington, a small fishing village along the Strait of Juan de Fuca where it meets the Pacific Ocean. Their reservation on the northwest tip of the Olympic Peninsula includes Tatoosh Island. The Makah people refer to themselves as "Kwih-dich-chuh-ahtx" (Qʷidiččaʔa·t) which translates as "the people who live by the rocks and seagulls".[1][2] Linguistically and ethnographically, they are closely related to the Nuu-chah-nulth and Ditidaht peoples of the West Coast of Vancouver Island across the Strait of Juan de Fuca in British Columbia.

Archaeological research suggests that the Makah people have inhabited the area now known as Neah Bay for more than 3,800 years. The ancient Makah lived in villages, inhabiting large longhouses made from western red cedar. These longhouses had cedar-plank walls. The planks could be tilted or removed to provide ventilation or light. The cedar tree was of great value to the Makah, who utilized its bark to make clothing and hats. Cedar roots were used in basket making, while canoes were carved from whole trees to hunt seals, gray whales and humpback whales. The Makah acquired much of their food from the ocean. Their diet consisted of whale, seal, fish, and a wide variety of shellfish. They would also hunt deer, elk, and bear from the surrounding forests.

Much of what is known about the way of life of the ancient Makah is derived from their oral tradition. There is also an abundance of archeological evidence of how the Makah lived.

In the early 17th century, a mudslide engulfed part of a Makah village near Lake Ozette. The mudslide preserved several houses and their contents in a collapsed state until the 1970s when they were excavated by Makahs and archaeologists from Washington State University. Over 55,000 artifacts were recovered, representing many activities of the Makahs, from whale and seal hunting to salmon and halibut fishing; as well as toys, games, bows and arrows. The oral history of the Makah mentions a "great slide" which engulfed a portion of Ozette long ago.

Archaeological test pits were excavated at the Ozette site in 1966 and 1967 by Richard Daugherty.[3] However, it was not until 1970 that it became apparent what was buried there. After a storm in February 1970, tidal erosion exposed hundreds of well preserved wooden artifacts. The excavation of the Ozette site began shortly after. University students worked with the Makah under the direction of archaeologists using pressurized water to remove mud from six buried long houses. The excavation went on for 11 years and produced over 55,000 artifacts, many of which are on display in the Makah Cultural and Research Center. The museum opened in 1979 and displays replicas of cedar long houses as well as whaling, fishing, and sealing canoes.[4]

In 1834, a dismasted, rudderless ship from Japan ran aground near Cape Flattery. The three survivors of the broken ship were held as slaves for several months by the Makah before being taken to Fort Vancouver.[5][6] 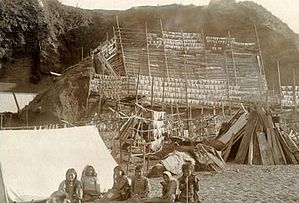 On January 31, 1855, the select Makah tribe representatives signed the Treaty of Neah Bay with the U.S. federal government, reducing the size of their traditional lands to what it is now. The treaty allowed for the establishment of the Makah Reservation (at 48°19′20″N 124°37′57″W﻿ / ﻿48.32222°N 124.6325°W﻿ / 48.32222; -124.6325 in Clallam County) and preserved the right of the Makah people to hunt whales and seals.[7] The Makah language was not used during the negotiation of the treaty, and the government used the Salish name for the tribe. Makah is actually an incorrect pronunciation of a Salish term meaning "generous with food".[8]

In 1936, the Makah Tribe signed the Makah Constitution, accepting the Indian Reorganization Act and establishing an elected tribal government. The constitution provided for a five member Tribal Council. Each year the council elects a Tribal Chairperson. The Council develops and passes laws for the Makah Reservation.

Currently, many Makah tribal members derive most of their income from fishing. Makah fish for salmon, halibut, Pacific whiting, and other marine fish.

The Makah language is the Indigenous language spoken by the Makah people. Makah has been extinct as a first language since 2002, when its last fluent native speaker died. However, it survives as a second language, and the Makah tribe is attempting to revive the language, including through preschool classes.[9][10] The endonymous name for Makah is qʷi·qʷi·diččaq.[11] The Makah tribe linguistically belongs to the Southern Nootkan branch of the Wakashan family of languages among North American indigenous peoples.The Makah language, also known as qʷi·qʷi·diččaq (qwiqwidicciat) is the only Wakashan language in the United States, with the other members in British Columbia, Canada, immediately across the Strait of Juan de Fuca on the west coast of Vancouver Island and northwards as far as that province's Central Coast region. Indigenous peoples of the Pacific Northwest Coast contains more information on linguistic links. 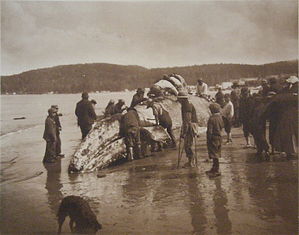 Makah oral history relates that their tradition of aboriginal whaling has been suspended and re-established several times. Most recently, the practice was suspended in the 1920s in response to the depletion of humpback and gray whale stocks by the coastal whaling industry. After the gray whale was removed from the Endangered Species List, the Makah re-asserted their whaling rights. With the support and guidance of the United States government and the International Whaling Commission, the Makah successfully hunted a gray whale on May 17, 1999. According to federal law, the Makah are entitled to hunt and kill one baleen whale, typically a gray whale, each year, though archaeological records and oral history indicate a significant number of humpback whales were hunted as well.

The Makah whaling technique is difficult and labor intensive. From cedar canoes, each seating six to nine people and more recently, from small fishing vessels, they hunt in the Pacific Ocean adjacent to their territory. Various traditional criteria are used to determine the best whale to harvest. By counting the whale's exhalations, the hunters determine when the whale is about to dive, and this is used to determine the best time to strike. Approaching the whale's left side, the hunter strikes when the whale is 3-4 feet deep, to avoid the force of the whale's tail. The harpoon is 16-18 feet long, composed of two pieces of yew wood spliced together. Historically, a mussel shell tip was used, in conjunction with barbs from elk horns. In recent times, a steel "yankee style" head is used, but the yew wood shaft is still used because of its flexibility, water resistance, and strength. Held fast to the whale, the harpoon shaft comes loose, to be recovered later, and a line is thrown from the canoe with seal skin floats attached, to provide drag to weaken the whale. In the past, a series of smaller lances were used to repeatedly strike the whale, gradually weakening and killing it, often over a period of hours, and in some cases, days. Recently, this technique has been replaced with the use of a big game rifle, which is used after the harpoon strike to ensure a more efficient kill. The International Whaling Commission permits four cartridges in whaling: .458 Winchester Magnum, .460 Weatherby Magnum, .50 BMG, and the .577 Tyrannosaur, which the Makah fired in the 1999 hunt.[12] Once the whale has been killed, a crew member called the "diver" jumps into the water and cuts a hole through the bottom and top of the whale's jaw, to which a tow line and float are attached. This holds the whale's mouth shut and prevents the carcass from filling with water and sinking. 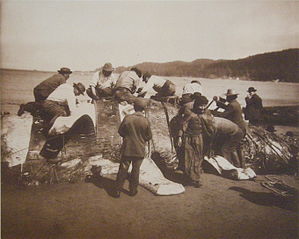 Makah whalers stripping the flesh from a whale, circa 1910.

The whale is towed to shore and received by members of the village. Traditional ceremonies and songs are performed to welcome the whale's spirit. Following this, the whale is divided in a precise and traditional fashion, with certain families having ownership of particular cuts. The "saddle piece" located midway between the center of the back and the tail is the property of the harpooner, and it is taken to his home where a special ceremony is performed. The meat and oil is distributed to community members, and a great deal of it is consumed during a potlatch.

The Makah assert that their right to whale is guaranteed in the 1855 Treaty of Neah Bay, which states in part: "The right of taking fish and of whaling or sealing at usual and accustomed grounds and stations is further secured to said Indians in common with all citizens of the United States." [13]

On September 8, 2007, five members of the Makah tribe shot a gray whale using a .460 caliber rifle, similar to that used in hunting elephants, despite court-imposed regulations governing the Makah hunt. The whale died within 12 hours, sinking while heading out to sea after being confiscated and cut loose by the United States Coast Guard.[14] The tribal council denounced the killing and announced their intention to try the individuals in tribal court.[15]