Archduke Maximilian Francis of Austria (8 December 1756, Vienna – 26 July 1801) was an Archbishop-Elector of Cologne, the last child of the Habsburg ruler Maria Theresa and her husband, Francis I, Holy Roman Emperor. His siblings included two Holy Roman Emperors (Joseph II and Leopold II), as well as Queen Marie Antoinette of France and Queen Maria Carolina of Two Sicilies. He was the last Elector of Cologne and an early patron of Ludwig van Beethoven.

Maximilian Francis was born at the Hofburg Imperial Palace, Austria. In 1780 he succeeded his uncle Prince Charles Alexander of Lorraine as Hochmeister (Grand Master) of the Teutonic Knights. 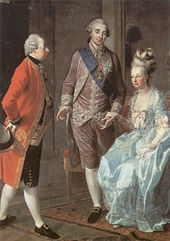 In 1784 he became Archbishop-Elector of Cologne, living in the archbishopric's seat at Bonn. He remained in that office until his death, meaning that he participated as Elector in the election of his brother Leopold II in 1790 and later that of his nephew Francis II in 1792.

The court organist was Christian Gottlob Neefe, who became an early mentor and teacher to Ludwig van Beethoven. Recognising his young pupil's remarkable gift both as a performer and a composer, Neefe brought Beethoven into the court, convincing Maximilian Francis to appoint him as assistant organist. Maximilian Francis, too, recognised the extraordinary abilities of the young Beethoven. In 1787, he gave Beethoven leave to visit Vienna to study with Mozart, a visit cut short by the illness and death of Beethoven's mother. In 1792, Maximilian again agreed to let Beethoven depart for Vienna in order to pursue studies with Joseph Haydn, Antonio Salieri and others, where he continued to pay Beethoven's court salary. Maximilian Francis maintained an interest in Beethoven's progress, and several letters from Haydn to Maximilian detailing his student's progress remain extant. The Archduke anticipated that Beethoven would return to Bonn and continue working for him, but in fact Beethoven never returned, choosing to pursue his career in Vienna.

Maximilian Francis's political rule over the Archbishopric met with disaster in 1794, when his domains were overrun by the troops of Revolutionary France. During the Napoleonic Wars, Cologne and Bonn were both occupied by the French army, in October and November of 1794. As the French approached, Maximilian Francis left Bonn never to return and his territories on the left bank of the Rhine eventually passed to France under the terms of the Treaty of Lunéville (1801). The Archbishop's court was dissolved. Although Maximilian Francis still retained his territories on the right bank of the Rhine, including Münster and the Duchy of Westphalia, the Elector, plagued by corpulence and ill-health, took up residence in Vienna after the loss of his capital and remained there until his death at age 45 in 1801, at Hetzendorf Palace. The dismantling of the court made Beethoven's relocation to Vienna permanent, and his stipend was terminated.

Beethoven planned to dedicate his First Symphony to his former patron, but Maximilian Francis died before it was completed.

In conspiracy theories, such as the one promoted in The Holy Blood and the Holy Grail, Maximilian Francis was alleged to be the twenty-second Grand Master of the Priory of Sion.