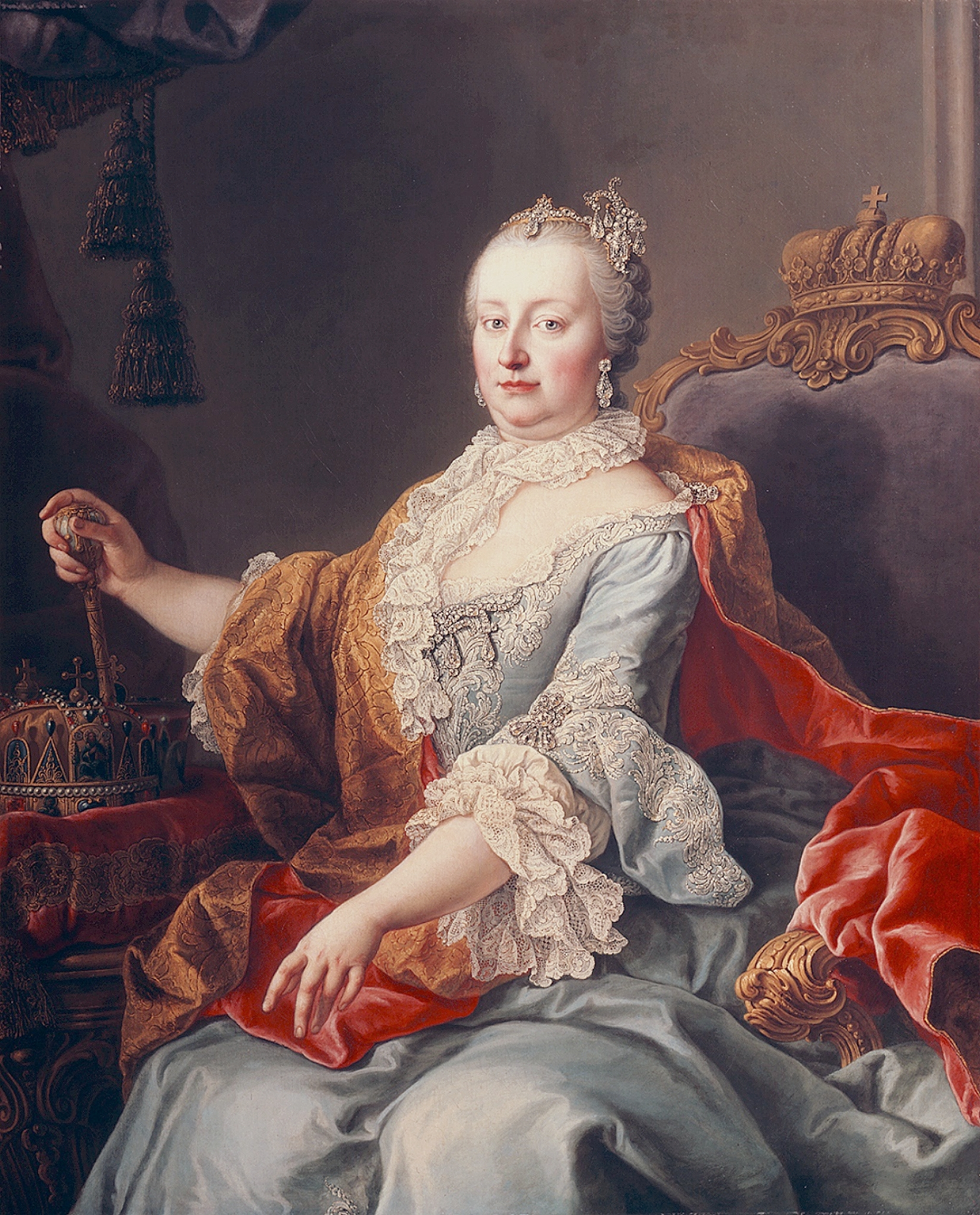 Maria Theresa ( _de. Maria Theresia, see also names in other languages; , ndash ) was the Archduchess regnant of Austria, Queen regnant of Hungary, Croatia and , and a Holy Roman Empress by marriage.

Maria Theresa helped initiate financial and educational reforms, promoted commerce and the development of agriculture, and reorganized the army, all of which strengthened Austria's resources. Continued conflict with the led to the and later to the . She became empress after the death of her husband and accession of her son Joseph as emperor in 1765.

Maria Theresa criticised many of Joseph's actions but agreed to the First Partition of Poland (1772). A key figure in the power politics of 18th century Europe, Maria Theresa brought unity to the Habsburg Monarchy and was considered one of its most capable rulers. Her 16 children also included , queen consort of France, and .

Maria Theresia Walburga Amalia Christina was born in , the eldest daughter of and , whose sole male heir - his son Leopold Johann - died as an infant in 1716. In 1713 Charles issued the Pragmatic Sanction which guaranteed his daughter the right to succeed to the Austrian throne and inherit his united lands on his death. Charles spent years carefully negotiating with other rulers to remove potential politico-legal objections to a woman inheriting the Habsburg territories, even making strategic concessions of territory. Initially, many Northern European monarchs agreed to the when it was issued. One of the few not to sign was of who, soon after Maria Theresa assumed the throne upon Charles' death on , , began the .

After Emperor Charles VII, who claimed the throne, died in 1745, Maria Theresa obtained the dignity of for her husband, Francis I. Though she was technically , Maria Theresa was the "" ruler of the Empire. Maria Theresa had in fact already begun her rule in 1740 during the Austrian War of Succession.

Maria Theresa's father had not given her any training in government, leaving her to learn for herself. Additionally, the army was weak and the treasury depleted as a result of two wars near the end of her father's reign. Maria Theresa was crowned Queen of Hungary in the St. Martin’s Cathedral in the then-Hungarian royal town and coronation place (now , the capital of ) on 25 June 1741. [ [http://www.nbs.sk/BIATEC/BIA07_04/26.PDF "Medallion for the coronation of Maria Theresia" at National Bank of Slovakia] ]

The began when invaded and occupied . While and France also invaded Austria's western territories, it was "Frederick the Great" who became Maria Theresa's primary foe during her reign. Therefore, she focused her internal and external policies towards the defeat of Prussia, which would help her regain the lands which had been taken from Austria. In the , France gave the Austrian Netherlands that it conquered back to Maria Theresa. In exchange, Maria Theresa ceded Parma, , and to the Infante Philip of .

After having been defeated in the First and Second , Maria Theresa began to modernize her realms with the assistance of . Defeat, however, reduced her morale and effectiveness as a ruler.Fact|date=February 2007 She increased the size of the army by 200% and increased taxes in order to guarantee a steady income for the government, and in particular for the military. She centralized the government by combining the Austrian and Bohemian chancellaries, formerly separate, into one administrative office. Before these changes, justice and administration had been overseen by the same officials- afterwards, she created a supreme court with the sole responsibility of upholding justice in her lands. These reforms strengthened the economy and the state in general.Maria Theresa, like the other Habsburgs, was a devout Roman Catholic. She was educated by Jesuits at , and in later life lacked the religious cynicism of royal contemporaries such as . Her conservative outlook involved an intolerant view of other faiths. In 1741, she expelled the s from . Her political distrust of Great Britain rested in part on her view of the established , whom she regarded as Protestant heretics.

Maria Theresa dropped Great Britain as an ally on the advice of her state chancellor, , and allied with Russia and France. She established the (the first worldwide) in 1752 and an academy of engineering science in 1754. She also demanded that the be given money to make the medical faculty more efficient. When she felt her army was strong enough, she prepared an attack on Prussia in 1756. However, it was Frederick II who attacked first, invading Saxony, another ally of Austria, thus initiating the . The war ended in 1763 when Maria Theresa signed the , recognizing Prussian ownership of most of Silesia.

Her husband Francis died two years later. Maria Theresa's devotion to him was so great that she dressed in mourning until her own death 15 years later. During this time, she became more closeted from her people. Her focus changed from attempting to regain Silesia to maintaining the peace. She also recognized Joseph II, her eldest son, as coregent and Emperor. However, she allowed him only limited powers because she felt that he was too rash and arrogant.

During the reign of Maria Theresa, infant mortality was a big problem in Austria. And, after calling in a renowned Dutch physician to study the problem, she followed his recommendation and made a decree that autopsies would be mandatory for all hospital deaths in city of Graz--Austria's second largest city. This law--still in effect today--combined with the relatively stable population Graz, has resulted in one of the most important and complete autopsy records in the world.

In the 1760s, smallpox claimed several victims in the imperial family. Maria Theresa was infected and received in 1767, although she recovered. Afterward, Maria Theresa became a strong supporter of (a predecessor method to smallpox vaccination), setting a strong example by requiring all of her children to be inoculated.

In the later years of her reign, Maria Theresa focused on reforming laws along the lines of "", especially to strengthen the economy of the Habsburg territories, especially after the loss of Silesia.

In 1771, she and Joseph II issued the , a reform that regulated a 's labor payments in her lands, which provided some relief. Other important reforms included outlawing witch-burning and torture, and, for the first time in Austrian history, taking capital punishment off the penal code, as it was replaced with forced labor. It was later reintroduced, but the progressive nature of these reforms remains noted. In 1772 Maria Theresa founded the Imperial and Royal Academy of Science and Literature in Brussels. Mandatory education was introduced in 1774; the goal was to form an educated class from which civil servants could be recruited.

Another innovation of Maria Theresa's was the which was to patrol everywhere, especially , and apprehend anyone suspected of doing something that could be deemed indecent (possibly due to her husband's supposed infidelity). Arrested prostitutes, for example, would be sent into villages in the eastern parts of the realm, leading some contemporary writers to note that these villages had 'exceptionally beautiful women' living there.

Maria Theresa had quite a few arranged marriages. One was to the son of a monarch of Eastern Europe but he died after a while in Austria. So Maria regarded herself a widow at the age of five because her betrothed was dead. She was eventually to Francis of Lorraine, of Lorraine in 1736 at the age of 19. He tended to leave day to day administration to Maria Theresa. [CathEncy|Maria Theresa] Unlike many monarchs of her time, she married for love. She had 16 children with him. Their eleven daughters all had the first name "Maria" in honor of the Virgin Mary. [ [http://genealogy.euweb.cz/habsburg/habsburg5.html Habsburg 5 ] ] They also had five sons. The youngest daughter was Maria Antonia, better known under her French name, , who would be promised in marriage to the future King .

After her husband's death, , succeeded in the elective monarchy of the Holy Roman Empire, maintaining the imperial Crown in the Habsburg line, in accordance with tradition. Maria Theresa then made Joseph II co-regent of her Austrian dominions, but she actually kept most of the power to herself, which led to tension between her and her son. It was not until her death that Joseph could fully exercise his powers.

Maria Theresa died in Vienna in 1780 at the age of 63, the only female to rule during the 650-year-long dynasty. She is buried in tomb number 56 in the in Vienna. Her son Joseph II succeeded her.

Maria Theresa was actually proclaimed King, rather than Queen, of Hungary upon her ascension to the Hungarian throne. Normally, however, she was styled Queen of Hungary.

Her title after the death of her husband:

Names in other languages

portrayed Maria Theresa in the 1938 film "" which starred .