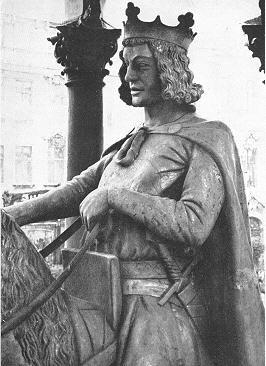 caption = Otto I the first Emperor
first_emperor = Otto I
last_emperor = Francis II
style = "Holy Roman Emperor"
residence =
appointer = Electors' Council
began = 962
ended = , The Holy Roman Emperor ( _de. Römischer Kaiser or Römisch-Deutscher Kaiser, _la. Romanorum Imperator) was the elected monarch ruling over the many varying numbers of states making up the &mdash; a feudal in existence from the (962) into the period until its dissolution during the (1806). The Empire, whose Emperor was crowned as was based upon the Germanic territories of the Emperor , and held by tradition to be his successors ruling its successor state. The last , Francis II of Austria and technically the Emperor-elect (candidates were initially elected by the s as )&mdash;as most were from the time of the in the 1070s&ndash;1080s, though styled as Emperor&mdash; dissolved the empire so that could not become (Holy Roman) emperor by controlling client states whose heads of state were the empire's Prince-Electors.

By convention the first Emperor was taken to be the Saxon king Otto the Great, crowned as Emperor by on , although the Empire itself (as well as the style "Holy Roman Emperor") did not come into use until some time later. Some have asserted that the first Emperor was (crowned in 800), but that claim was only made afterwards. Holy Roman Emperors were crowned by the s up until the 16th century, and the last Emperor, Francis II, abdicated in 1806 during the s that saw the Empire's final dissolution.

The "Roman" of the Emperor's title was a reflection of the "" ("transfer of rule") principle that regarded the (Germanic) Holy Roman Emperors as the inheritors of the title of Emperor of the , a title left unclaimed in the West after the death of in 480.

Establishment of the Holy Roman Empire

From the time of Otto the Great onward, much of the former kingdom of Eastern Francia became the Holy Roman Empire. The various German princes elected one of their peers as "King of the Germans", after which he would be crowned as emperor by the . The last emperor to be crowned by the pope was Charles V; all emperors after him were technically "emperors-elect", but were universally referred to as "Emperor".

Conflict with the Papacy

The title of "Emperor" ("") carried with it an important role as protector of the Catholic Church, and women were ineligible to be crowned. As the papacy's power grew during the Middle Ages, Popes and emperors came into conflict over church administration. The most well-known and bitter conflict was that known as the fought during the 11th century between Henry IV and .

Successions to the kingship were controlled by a variety of complicated factors. Elections meant the kingship of was only partially hereditary, unlike the kingship of , although sovereignty frequently remained in a dynasty until there were no more male successors. Some scholars suggest that the task of the elections was really to solve conflicts only when the dynastic rule was unclear, yet, the process meant that the prime candidate had to make concessions, by which the voters were kept on side, which were known as "Wahlkapitulationen" (election capitulations). The Electoral council was set at seven princes (three archbishops and four secular princes) by the . It remained so until 1648, when the settlement of the required the addition of a new elector to maintain the precarious balance between Protestant and Catholic factions in the Empire. Another elector was added in 1690, and the whole college was reshuffled in 1803, a mere three years before the dissolution of the Empire.

After 1438, the Kings remained in the house of and , with the brief exception of one , Charles VII. In 1508, and permanently after 1556, the King no longer traveled to Rome for the crowning by the Pope.

This list includes all emperors, whether or not they styled themselves "Holy Roman Emperor", from Otto the Great on. There are some gaps in the tally. For example, was King of Germany but not Emperor; Emperor Henry II was numbered as his successor as German King. The Guideschi follow the numeration for the .

The Emperor was crowned in a special ceremony, traditionally performed by the in , using the . Without that coronation, no king, despite exercising all powers, could call himself Emperor. In 1508, Pope allowed Maximilian I to use the title of Emperor without coronation in Rome, though the title was qualified as "Electus Romanorum Imperator" ("elected Emperor of the Romans"). Maximilian's successors adopted the same titulature, usually when they became the sole ruler of the Holy Roman Empire. Maximilian's first successor Charles V was the last to be crowned Emperor.