Zhuangzi
This article is about the Chinese philosopher. For his work, see Zhuangzi (book).

Zhuangzi (simplified Chinese: 庄子; traditional Chinese: 莊子; pinyin: Zhuāng Zǐ; Wade–Giles: Chuang Tzŭ) was an influential Chinese philosopher who lived around the 4th century BCE during the Warring States Period, a period corresponding to the philosophical summit of Chinese thought — the Hundred Schools of Thought, and is credited with writing—in part or in whole—a work known by his name, the Zhuangzi. His name Zhuangzi (English "Master Zhuang", with Zi being an honorific) is sometimes spelled Zhuang Tze, Zhuang Zhou, Chuang Tsu, Chuang Tzu, Chouang-Dsi, Chuang Tse, or Chuangtze.

Zhuangzi is thought to have lived during the reign of King Hui of Liang and King Xuan of Qi, in the span from 370 to 301 BCE. Zhuangzi was from the Town of Meng (蒙城, Méng Chéng) in the state of Song (now Mengcheng 蒙城, Anhui).

The validity of his existence has been questioned by some, including himself (See below) and Russell Kirkland, who writes:

According to modern understandings of Chinese tradition, the text known as the Chuang-tzu was the production of a 'Taoist' thinker of ancient China named Chuang Chou/Zhuang Zhou. In reality, it was nothing of the sort. The Chuang-tzu known to us today was the production of a thinker of the third century CE named Kuo Hsiang. Though Kuo was long called merely a 'commentator,' he was in reality much more: he arranged the texts and compiled the present 33-chapter edition. Regarding the identity of the original person named Chuang Chou/Zhuangzi, there is no reliable historical data at all.[1][2]

However, the existence of a biography of Zhuangzi in the Records of the Grand Historian chapter 63 shows that even if not the author of the text Zhuangzi, records of the philosopher Zhuangzi pre-date Guo Xiang (d. 312) by centuries. Furthermore, the Han Shu "Yiwen zhi" (Monograph on literature) lists a text Zhuangzi, showing that a text with this title existed no later than the early 1st century CE, again pre-dating Guo Xiang by centuries.

Zhuangzi is traditionally credited as the author of at least part of the work bearing his name, the Zhuangzi. This work, in its current shape consisting of 33 chapters, is traditionally divided into three parts: the first, known as the "Inner Chapters", consist of the first seven chapters; the second, known as the "Outer Chapters", consist of the next 15 chapters; the last, known as the "Mixed Chapters", consist of the remaining 11 chapters. The meaning of these three names is disputed: according to Guo Xiang, the "Inner Chapters" were written by Zhuangzi, the "Outer Chapters" written by his disciples, and the "Mixed Chapters" by other hands; the other interpretation is that the names refer to the origin of the titles of the chapters—the "Inner Chapters" take their titles from phrases inside the chapter, the "Outer Chapters" from the opening words of the chapters, and the "Mixed Chapters" from a mixture of these two sources. Further study of the text does not provide a clear choice between these alternatives. On the one side, as Martin Palmer points out in the introduction to his translation, two of the three chapters Sima Qian cited in his biography of Zhuangzi, come from the "Outer Chapters" and the third from the "Mixed Chapters". "Neither of these are allowed as authentic Chuang Tzu chapters by certain purists, yet they breathe the very spirit of Chuang Tzu just as much as, for example, the famous 'butterfly passage' of chapter 2."[3] On the other hand, chapter 33 has been often considered as intrusive, being a survey of the major movements during the "Hundred Schools of Thought" with an emphasis on the philosophy of Hui Shih. Further, A.C. Graham and other critics have subjected the text to a stylistic analysis and identified four strains of thought in the book: a) the ideas of Zhuangzi or his disciples; b) a "primitivist" strain of thinking similar to Laozi; c) a strain very strongly represented in chapters 8-11 which is attributed to the philosophy of Yang Chu; and d) a fourth strain which may be related to the philosophical school of Huang-Lao.[4]

The style of the Zhuangzi is of little help in resolving this issue. As Martin Palmer again writes in his translation, "Trying to read Chuang Tzu sequentially is a mistake. The text is a collection, not a developing argument."[5] Not only is Zhuangzi a collection of sayings attributed to Zhuangzi, it also includes a number of stories, all presented haphazardly. It would be easy for another author to insert new material without disturbing the flow before the text had been stabilized centuries after Zhuangzi's death, and possibly escape detection.

Zhuangzi was renowned for his brilliant wordplay and use of parables to convey messages. His critiques of Confucian society and historical figures are humorous and at times ironic.

In general, Zhuangzi's philosophy is skeptical, arguing that life is limited and knowledge to be gained is unlimited. To use the limited to pursue the unlimited, he said, was foolish. Our language and cognition in general presuppose a dao to which each of us is committed by our separate past—our paths. Consequently, we should be aware that our most carefully considered conclusions might seem misguided had we experienced a different past. Zhuangzi argues that in addition to experience our natural dispositions are combined with acquired ones—including dispositions to use names of things, to approve/disapprove based on those names and to act in accordance to the embodied standards. Thinking about and choosing our next step down our dao or path is conditioned by this unique set of natural acquisitions.

Zhuangzi's thought can also be considered a precursor of relativism in systems of value. His relativism even leads him to doubt the basis of pragmatic arguments (that a course of action preserves our lives) since this presupposes that life is good and death bad. In the fourth section of "The Great Happiness" (至樂 zhìlè, chapter 18), Zhuangzi expresses pity to a skull he sees lying at the side of the road. Zhuangzi laments that the skull is now dead, but the skull retorts, "How do you know it's bad to be dead?"

Another example about two famous courtesans points out that there is no universally objective standard for beauty. This is taken from Chapter 2 (齊物論 qí wù lùn) "On Arranging Things", or "Discussion of Setting Things Right" or, in Burton Watson's translation, "Discussion on Making All Things Equal".

However, this subjectivism is balanced by a kind of sensitive holism in the famous section called "The Happiness of Fish" (魚之樂, yúzhīlè).

Zhuangzi and Huizi were strolling along the dam of the Hao Waterfall when Zhuangzi said, "See how the minnows come out and dart around where they please! That's what fish really enjoy!"

Huizi said, "You're not a fish — how do you know what fish enjoy?"

Zhuangzi said, "You're not me, so how do you know I don't know what fish enjoy?"

Zhuangzi said, "Let's go back to your original question, please. You asked me how I know what fish enjoy — so you already knew I knew it when you asked the question. I know it by standing here beside the Hao." (17, tr. Watson 1968:188-9, romanization changed to pinyin)

The traditional interpretation of this "Daoist staple", writes Chad Hansen (2003:145), is a "humorous miscommunication between a mystic and a logician". The encounter also outlines part of the Daoist practice of observing and learning from the natural world. 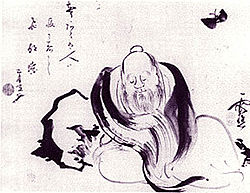 Another well-known part of the book, which is also found in Chapter 2, is usually called "Zhuangzi dreamed he was a butterfly" (莊周夢蝶 Zhuāng Zhōu mèng dié). Again, the names have been changed to pinyin romanization for consistency:

This hints at many questions in the philosophy of mind, philosophy of language, and epistemology.[vague] The name of the passage has become a common Chinese idiom, and has spread into Western languages as well. It appears, inter alia, as an illustration in Jorge Luis Borges' famous essay "A New Refutation of Time", and may have inspired H. P. Lovecraft's 1918 short story "Polaris". It also appears in Victor Pelevin's 1996 philosophical novel Buddha's Little Finger.

Zhuangzi's philosophy was very influential in the development of Chinese Buddhism, especially Chán (known in Japan as Zen).

Zhuangzi said the world "does not need governing; in fact it should not be governed," and, "Good order results spontaneously when things are let alone." Murray Rothbard called him "perhaps the world's first anarchist".[6]

In Chapter 18, Zhuangzi also mentions life forms have an innate ability or power (hua 化) to transform and adapt to their surroundings. While his writings don't give any solid evidence or mechanism of biological evolution, such as those of Alfred Wallace and Charles Darwin do, his idea about the transformation of life from simple to more complex forms could be seen as being along the same line of thought. Zhuangzi further mentioned that humans are also subject to this process as humans are a part of nature.[7]