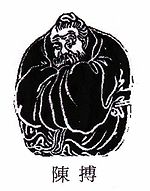 Chen Tuan
This is a Chinese name; the family name is Chen.

Chen Tuan (871-989) was a legendary Taoist sage. His birth name was Chen Tuan (Simplified Chinese: 陈抟; Traditional Chinese: 陳摶; Pinyin: Chén Tuán); his courtesy name was Tunan (图南/圖南 Túnán); his pseudonym as a sage was (Wade-Giles) Chen Hsi I (Pinyin) Chén Xīyí (陳希夷) or Master Xīyí 希夷先生 or Fúyáozǐ 扶搖子. In Chinese, he is often respectfully referred to as "Aged Ancestor Chen Tuan" (陳摶老祖 Chén Tuán Lǎozǔ) and "Ancestral Teacher Xiyi" (希夷祖師 Xīyí Zǔshī). Little is certain about his life, including when and where he was born. He was born around the end of the Five Dynasties and Ten Kingdoms Period and the start of the Song Dynasty, possibly in what is now Luyi in Henan Province.

According to certain Taoist schools who claim him as a founder, he lived a secluded life in the Nine Room Cave on Mount Wudang. Later at Mount Hua, one of the five sacred mountains of China, he is said to have created the kung fu system Liuhebafa ("Six Harmonies and Eight Methods"). Along with this internal art, he is also said to be associated with a method of Qi (energy) cultivation known today as Taiji ruler, sleeping meditation, a 24 Daoyin Qigong Method (er shi shi ssu shih tao yin fa) seated and standing exercises designed to prevent diseases that occur during seasonal change.

The story goes that Chen Tuan had planned a career at the Imperial court, but flunked the state examination and became a hermit sage instead. He was also said to be conversant with the Confucian classics, history, and the theories of various schools of thought. In his legends he was said to be fond of taoist philosophy, medical principles, astronomy and geography, and famous for his poems as well. Chen Tuan liked to study the I Ching, which he was unable to put down. Chen Tuan, styled Tunan, titled himself Fuyao Zi (one soaring upward in the high sky, like a roc in Nan Hua Jing written by Zhuangzi) born in Zhenyuan of Haozhou (Hao County of Anhui Province nowadays). As a Taoist master in the late Tang Dynasty, Five Dynasties and early Northern Song Dynasty, Chen was astonishingly intelligent and erudite in his childhood. He travelled here and there and dwelled in Wudang Mountain for two decades at the beginning. Later he lived a hermit’s life in Huashan at the First Year of Xiande Period of Later Zhou Dynasty (one of the Five Dynasties).

Chen Tuan has a good command of primordial Yi learning, teaches River Chart and Luo River Book as well as Infinite and Taiji Charts. As a culminant figure of Taoist doctrines who pioneers the Confucian school of idealist philosophy of the Song and Ming Dynasties, he has a profound influence upon later generations. He is adept in practicing Taoist inner alchemy and often sleep meditation. Strange to say, it often takes several months for sleeping meditation practice; and as a result was known as the "Sleeping Immortal." Having rejected emperor’s orders and edicts, was still conferred the title of “Master Xi Yi" (Master of the Inaudible and Invisible) by the Emperor Taizong of the Song Dynasty. During the first year of Duangong Period of the Emperor Taizong, Chen appointed his disciples to cut a stone chamber in the Zhao Chao Valley (later renamed Xi Yi Valley); then Chen Tuan presented a report to the imperial court in which he wrote the following note: “I will die soon. I am about to leave, nowadays I’m transformed in the Zhang Chao Valley at the foot of Lotus Peak on the 27th day of the tenth month of the lunar calendar”. By the time he died when he cupped his check in the hand his facial features still remained without a change.

Chen Tuan once told to his disciples: “I will visit Emei Mountain next year.” Later a secret agent saw him at Emei Mountain, only to find no trace of Chen Tuan while he was looking for him. Many tales of Chen Tuan have been circulated around; for instance: "He wanders around and shows no concern for worldy benefits. However, Chen still cares about the ordinary people and is compassionate so that he is deeply respected by the people. This Taoist sage was considered the embodiment of the Supreme Lord Lao and received the nickname of “Aged Ancestor”, a symbol of Taoism in Huashan.

According to the "semi-historical" biography of Gen. Yue Fei, it was the immortal Chen Tuan who, disguised as a wandering Taoist, warned the Yue Family of the imminent Yellow River flood.