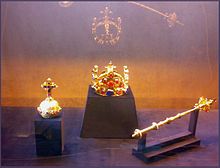 The Czech Crown Jewels (a copy).

The Czech Crown Jewels include the Crown of Saint Wenceslas (Svatováclavská koruna), the royal orb and sceptre, the coronation vestments of the Bohemian kings, the gold reliquary cross, and St. Wenceslas' sword. The crown was made for the coronation of Charles IV in 1347, making it the fourth oldest in Europe.[1]

The crown is named and dedicated after the Duke St. Wenceslaus of the Přemyslids dynasty of Bohemia. The crown has an unusual design, with vertical fleurs-de-lis standing at the front, back and sides. Made from gold and a set of precious rubies, sapphires, emeralds and pearls, the 22-carat gold crown weighes 2.475g. It was originally held in Karlstejn Castle, designed in the 14th century by Matthias of Arras. Since 1867 it has been stored in St. Vitus Cathedral of Prague Castle.

After 1918 and the establishment of the Czechoslovak Republic the Coronation Jewels ceased to serve their original function, but remained important as symbols of national independence and statehood. According to the ancient tradition and regulations laid down by Charles the Fourth in the 14th century, the jewels are exhibited only to mark special occasions (last time in 2008). But this occurs only on quite exceptional occasions. In the twentieth century there were nine such moments in history. The President of the Republic has the exclusive right to decide on the display of the Crown Jewels.

The door to Crown Jewels chamber, and likewise the iron safe, has seven locks and there are seven holders of the keys: the President of the Republic, the Prime Minister, the Prague Archbishop, the Chairman of the House of Deputies, the Chairman of the Senate, the Dean of the Metropolitan Chapter of St. Vitus Cathedral and the Mayor of Prague, who must all convene to facilitate opening the impenetrable door and coffer.

An ancient Czech legend says that any usurper who places the crown on his head is doomed to die within a year. In the eyes of some this was confirmed during World War II when Reinhard Heydrich, the Nazi governor of the puppet Protectorate of Bohemia and Moravia secretly wore them believing himself to be a great king, and was assassinated less than a year later by the Czech underground.

Kings and queens crowned by Crown of Saint Wenceslas (and other crown jewels):