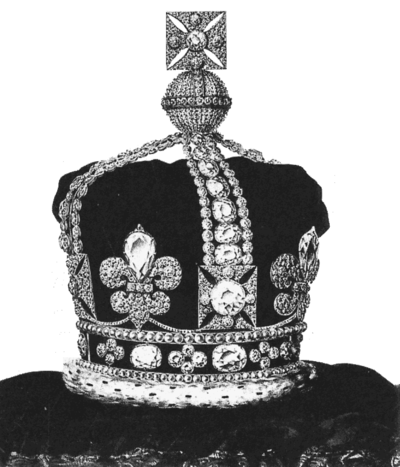 Lithograph of the crown of Queen Adelaide.

The Crown of Queen Adelaide was the consort crown of Adelaide of Saxe-Meiningen, wife and Queen consort of King William IV of the United Kingdom. It was used at the coronation of William and Adelaide in 1831. It was emptied of its jewels soon afterwards, was not worn again by Queen Adelaide, and has never been worn since.

Since the 1690s English and British queens consort had been crowned with the Crown of Mary of Modena, first made for the wife of King James II. However criticism of the continued use of this crown had mounted, for reasons of age, size, state of repair and because it was seen to be too theatrical and undignified. In the preparations for the coronation in 1831 it was ruled that the Modena crown was "unfit for Her Majesty's use".[1] Plans were made for the creation of a new consort crown.

The new crown followed British crown tradition in having four half arches, meeting a globe, on top of which sat a cross. The Queen had objected to the standard practice of hiring diamonds and jewels for a crown prior to its use. Instead diamonds from her own private jewellery were installed in her new crown. Following the coronation, the diamonds were all removed, and the crown stored as a shell.

Since Queen Adelaide, all British queens consort have had their own special consort crown made for them, rather than wearing the crowns of any of their predecessors. Later consort crowns were made for Alexandra of Denmark (1902), Mary of Teck (1911) and Elizabeth Bowes-Lyon (1937).

The formal portrait of Queen Charlotte, the queen consort of George III, in her coronation robes by Allan Ramsay show her with a similar diminutive crown with which she had also been crowned and had had set with her own jewels, diamonds which George IV later had set into the famous insignia of the Order of St. Patrick which were later stolen from Dublin Castle.