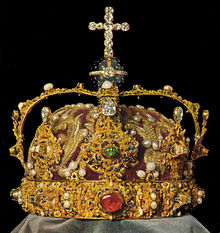 The Crown of King Eric XIV of Sweden was made in Stockholm in 1561 by Flemish goldsmith Cornelius ver Weiden[1], for the coronation of king Eric XIV. It is held in the Treasury under the Stockholm Palace along with the rest of the Swedish Royal Regalia.