Crown of Mary of Modena

Crown of Mary of Modena 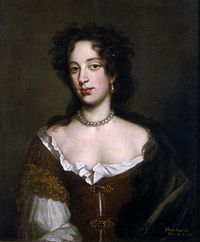 Mary of Modena, wife of James VII of Scotland and II of England; this crown was made for her coronation.

Traditionally, where a monarch is married, his queen consort is crowned with him at his coronation. Under Oliver Cromwell's rule, all of the ancient English crown jewels had been destroyed. When King Charles II was crowned in 1661 he was not married, so there was no need to create a new consort crown. When however his younger brother, the Duke of York became King James II/VII, it was necessary to make a new crown for his queen, Mary of Modena.

In fact, three items of royal headgear were created; a

Mary of Modena's coronation crown no longer exists. However her state crown and diadem still are held in the Tower of London.

Mary of Modena's state crown, which was manufacted in 1685 by goldsmith Richard de Beauvoir, was, as was the norm, decorated with hired jewels: 38 very large diamonds, 523 great and small diamonds and 129 large pearls. The circlet of gold, set with pearls at both edges, is decorated with 20 large diamonds. 4 crosses and 4 fleurs-de-lis, all made of diamonds, alternate above the upper row of pearls. It contains four half arches above the crosses: one row of pearls on each arch is framed on both sides by two rows of diamonds. A globe sits at the centre, on which sits a cross made of 5 diamonds and 3 pearls.

Though not the coronation crown of its original wearer, it was used for the coronation of all subsequent queens consort until 1831, and was worn on occasion by queens regnant Mary II and Anne, Mary of Modena's stepdaughters.

In 1831, however the crown fell out of favour, and was replaced by the Crown of Queen Adelaide for the latter's coronation alongside her husband, King William IV. In 1838, as planning was in process for the coronation of Queen Victoria, the Modena crown and diadem were described as "extremely small, and by reason of their age and disuse are in a State of upper decay."[1] One official in the Lord Chamberlain's office later wrote of the crown's "very tawdry and theatrical appearance".

It is no longer used in royal ceremonial, but in 1938-9 had its mock pearls replaced with cultured pearls.