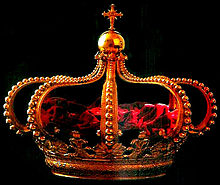 The crown of the Kings of Portugal has an interesting and particular characterístic: after 1640 until 1910 (Proclamation of the Republic) there was no coronation of the King or Queen. It was substituted by a ceremony called Aclamation, where the Sovereign received the other regalias and the crown remained beside him (and not on his head). This tradition was initiated with the restoration of the Portuguese independence in 1640: the King John IV deposited his crown at the foot of an image of Our Lady the Immaculate Concepcion and so calling her "The Real Queen Of Portugal".The last crown used by Portuguese kings and queen was composed only of simple gold and red velvet with an imperial format and was made in Rio de Janeiro Brazil in 1817 for the aclamation of King John VI. It was created in the workshop of Don Antonio Gomes da Silva. Today, the crown along with other royal regalia is kept in the Ajuda Palace, Lisbon.