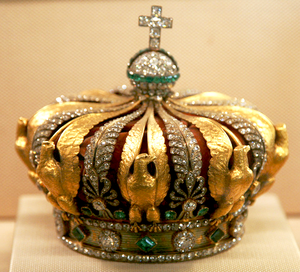 The Crown of Empress Eugénie

The Crown of Empress Eugénie was the consort crown of Eugénie de Montijo, the empress consort of Emperor Napoleon III of France. Though neither she nor her husband underwent a coronation a consort crown was specially created for her.

After her husband was overthrown in 1870, following the Franco-Prussian War, Napoleon and Eugénie lived in exile in the United Kingdom. She died in 1920. She was the last surviving French person to have worn a crown.

Though most of the French Crown Jewels were sold by the French Third Republic in 1885, the Crown of Empress Eugénie was kept and is on display in the Louvre museum in Paris.