Doña María Eugenia Ignacia Augustina de Palafox-Portocarrero de Guzmán y Kirkpatrick, 16th Countess of Teba and 15th Marquise of Ardales; 5 May 1826 – 11 July 1920), known as Eugénie de Montijo (French pronunciation: [øʒeni də montixo]), was the last Empress consort of the French from 1853 to 1871 as the wife of Napoleon III, Emperor of the French.

Eugenia's older sister, María Francisca de Sales de Palafox Portocarrero y Kirkpatrick, also known as Paca (1825–1860), who inherited most of the family honours and was 12th Duchess of Peñaranda Grandee of Spain and 9th Countess of Montijo, title later ceded to her sister, married the Duke of Alba in 1849. Until her own marriage in 1853, Eugénie variously used the titles of Countess of Teba or Countess of Montijo, but some family titles were legally inherited by her elder sister, through which they passed to the House of Alba. After the death of her father Eugenia became the 9th Countess of Teba, and is named as such in the Almanach de Gotha (1901 edition). After Eugenia's demise all titles of the Montijo family came to the Fitz-Jameses (the Dukes of Alba and Berwick).

Eugénie de Montijo, as she became known in France, was educated in Paris, at the fashionable convent of the Sacré Cœur, where she received a Catholic education. When Prince Louis Napoléon became president of the Second Republic, she appeared with her mother at several balls given by the "prince-president" at the Elysée Palace; it was there that she met the future emperor, whom she wed on 30 January 1853, not long after he had been rebuffed in his attempts to marry first Princess Carola of Vasa (later Queen of Saxony), a granddaughter of the deposed King of Sweden Gustav IV Adolph, and then Queen Victoria's teenage niece, Princess Adelheid of Hohenlohe-Langenburg.

In a speech from the throne on 22 January, Napoleon III formally announced his engagement, saying, "I have preferred a woman whom I love and respect to a woman unknown to me, with whom an alliance would have had advantages mixed with sacrifices." The so-called love match was looked upon with some sarcastic comment in the United Kingdom. The Times wrote, "We learn with some amusement that this romantic event in the annals of the French Empire has called forth the strongest opposition, and provoked the utmost irritation. The Imperial family, the Council of Ministers, and even the lower coteries of the palace or its purlieus, all affect to regard this marriage as an amazing humiliation..." A 26-year-old Spanish countess, of legitimate title and ancient lineage, the British newspaper implied with ill-concealed mirth, was not considered good enough for the House of Bonaparte (only two generations removed from obscurity in Corsica).

When the empress wore the new cage crinolines in 1855, European fashion followed suit, and when she abandoned vast skirts at the end of the 1860s, at the encouragement of her legendary couturier, Charles Frederick Worth, the silhouette of women's dress followed her lead again. Eugénie's aristocratic elegance, splendour of dress and legendary jewels are well documented in innumerable paintings, especially by her favourite portraitist, Franz Winterhalter.

Her husband often consulted her on important questions, and she acted as Regent during his absences in 1859, 1865 and 1870. A Catholic and a conservative, Eugénie's influence countered any liberal tendencies in the emperor's policies. She was a staunch defender of papal temporal powers in Italy and of ultramontanism.

She was also largely blamed for the fiasco of the French intervention in Mexico and the eventual death of Emperor Maximilian I of Mexico. Critics claimed that she had encouraged French involvement as a means of keeping herself busy and to get over her husband's affairs.[2]

After the Franco-Prussian War 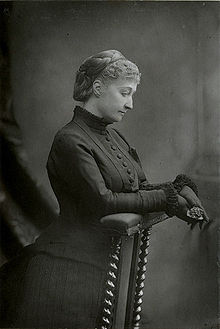 Empress Eugénie in mourning for her son, 1880

When the Second French Empire was overthrown after France's defeat in the Franco-Prussian War (1870–1871), the empress and her husband took refuge in England, and settled at Chislehurst, Kent. After his death in 1873, and that of her son in 1879, she moved in 1885 to Farnborough, Hampshire, and to her villa "Cyrnos" (ancient Greek name of Corsica), that she had built at Cape Martin between Menton and Nice, where she lived in retirement, abstaining from all interference in French politics. Her house in Farnborough is now an independent Roman Catholic girls' school, Farnborough Hill.

After the deaths of her husband and son her health started to deteriorate. Her physician recommended she visit Bournemouth which was, in Victorian times, famed as a health spa resort. During her visit in 1896, a groundskeeper lit hundreds of little tea candles in the municipal Bournemouth Gardens to light her way to the sea at night. This event is still commemorated in the same gardens every September in an elaborate public display, set to music, of both static and floating lighted candles.[3]

The former empress died in July 1920, aged 94, during a visit to her relatives, the Dukes of Alba in Madrid, in her native Spain, and she is interred in the Imperial Crypt at St Michael's Abbey, Farnborough, with her husband and her son, who had died in 1879 fighting in the Zulu War in South Africa. She left all her possessions to various relatives: her Spanish estates went to the grandsons of her sister, the Fitz-Jameses (Dukes of Berwick and Alba), the house in Farnborough with all collections to the heir of her son, Prince Victor Bonaparte, Villa Cyrnos to his sister, Princess Laetitia of Aosta. Liquid funds were divided into three parts and given to the above relatives, except the sum of 100 000 francs bequeathed to the Committee for Rebuilding the Cathedral of Reims.

Her deposed family's friendly association with the United Kingdom was commemorated in 1887 when she became the godmother of Victoria Eugenie of Battenberg (1887–1969), daughter of Princess Beatrice, who later became Queen consort of Alfonso XIII of Spain. This baptism was an early example of ecumenism as Victoria Eugenie who was born at Balmoral was baptised in the Church of Scotland. A century later, the second daughter of the present Duke of York, born in 1990, was named Princess Eugenie. 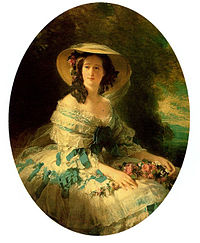 The Empress has also been commemorated in space; the asteroid 45 Eugenia was named after her,[4] and its moon, Petit-Prince, after the Prince Imperial.[5] The empress had an amazing jewellery collection, most of them were later owned by the Brazilian Aimee de Heeren.[6][7] Aimee de Heeren collected jewels and she was fond of the Empress as both of them were considered to be the "Queens of Biarritz". Both used to spend the summer on the cote basque, The Empress lived at the "Villa Eugenie", now called Hotel du Palais, Aimee de Heeren, a century later, in the "Villa La Roseraie".

Named for the Empress, the Eugénie hat is a style of women's chapeau worn dramatically tilted and drooped over one eye; its brim is folded up sharply at both sides in the style of a riding topper, often with one long ostrich plume streaming behind it.[8] The hat was popularized by film star Greta Garbo and enjoyed a vogue in the 1930s that was "hysterically popular".[9] More redolent of the Empress' actual apparel, however, was the late nineteenth-century fashion of the Eugénie paletot, a women's greatcoat with bell sleeves and a single button enclosure at the neck.[10]

She was the 475th Dame of the Royal Order of Queen María Luisa of Spain and Dame Grand Cross of the Order of the British Empire.