In 1806, as part of his wholescale re-ordering of the map of Europe, Napoleon I of France upgraded the independent German duchy of Bavaria to full kingdom status. The former Duke of Bavaria, now King of Bavaria, Maximilian I, commemorated the fact by commissioning a set of crown jewels for use by Bavarian monarchs. 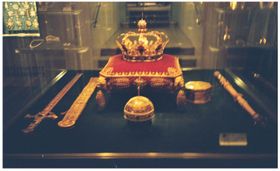 Included in the regalia were:

As part of a republican Germany, Bavaria has not had a monarch since 1918 but the Bavarian Crown Jewels are still on show in the Treasury of the Residenz palace in Munich.