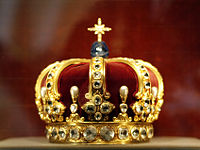 The Prussian Crown Jewels is a set of crowns, orb and scepters used to crown Kings of Prussia of the Hohenzollern dynasty. After the King of Prussia became German Kaiser on the establishment of the German Empire on January 18, 1871, they were no longer used as the position of King of Prussia while still remaining was a title of little importance compared to the new role as German Kaiser. There was no crown for the German Empire.

In contrast with the lavish, heavily bejewelled crowns of other monarchies (e.g. British, Russian), the Prussian crown jewels were sometimes described as "rather plain".

The regalia includes the

In the absence of further state regalia for the German Empire (1871-1918), the older royal Prussian Crown Jewels were sometimes also regarded as German Crown Jewels:

Most of the Prussian regalia are on public display in the Charlottenburg Palace in Berlin. The Crown of Wilhelm II, in his role as King of Prussia, is in the Schloss Hohenzollern in Germany.