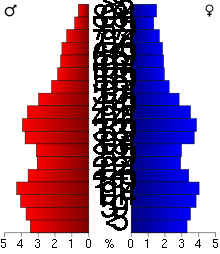 Graph showing the age distribution of the population of South Dakota

South Dakota has a number of large Indian reservations (shown in pink).

In 2005, the Census Bureau estimated that 88.5% of South Dakotans were White, 8.8% were American Indian or Alaskan Native, 2.1 were Hispanic (of any race), 0.8% were Black, 0.7% were Asian, while 2.1% belonged to more than one race.[2] The five largest ancestry groups in South Dakota are: German (40.7%), Norwegian (15.3%), Irish (10.4%), Native American (8.3%), and English (7.1%).[3] German-Americans are the largest ancestry group in most parts of the state, especially in the east, although there are also large Scandinavian populations in some counties. South Dakota has the nation's largest population of Hutterites,[4] a communal Anabaptist group who emigrated from Europe in 1874.

American Indians, largely Lakota, Dakota, and Nakota (Sioux) are predominant in several counties. South Dakota has the third highest proportion of Native Americans of any state, behind Alaska and New Mexico.[5] Five of the state's counties lie entirely within Indian reservations.[6] Living standards on many reservations is often very low when compared with the national average. The unemployment rate in Fort Thompson, on the Crow Creek Indian Reservation, is 70%, and 21% of households there lack plumbing or basic kitchen appliances.[7] A 1995 study by the U.S. Census Bureau found that 58% of homes on the Pine Ridge Indian Reservation did not have a telephone.[8]

South Dakota, in common with five other Midwest states (Nebraska, Kansas, Oklahoma, North Dakota, and Iowa), is experiencing a trend of falling populations in rural counties, despite an overall increase in population for all of these states except North Dakota. 89% of the total number of cities in these six states have fewer than 3,000 people; hundreds have fewer than 1000. Between 1996 and 2004, almost half a million people, nearly half with college degrees, left the six states. "Rural flight" as it is called has led to offers of free land and tax breaks as enticements to newcomers.

The effect of rural flight has not been spread evenly through South Dakota, however. Although most rural counties and small towns have lost population, the Sioux Falls area and the Black Hills have gained population. In fact, Lincoln County, near Sioux Falls, is the ninth-fastest growing county (by percentage) in the United States.[11] The growth in these areas has compensated for losses in the rest of the state, and South Dakota's total population continues to increase steadily, albeit at a slower rate than the national average.[2]

According to a 2001 survey, 86% of South Dakotans described themselves as being members of a Christian denomination, while 8% said that they were not religious and 3% claimed faith in a non-Christian religion. The largest Christian denomination was Lutheran (27%), followed closely by Roman Catholic at 25%. Other Christian denominations mentioned included Methodist (13%), Baptist (4%), Presbyterian (4%), Pentecostal (2%), Congregational (2%), Episcopal/Anglican (1%), and Seventh-day Adventist (1%). 7% responded either as a non-denominational Christian or a Protestant, while 2% refused to answer.[12]