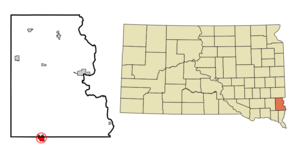 mapsize = 250px
map_caption = Location in Lincoln County and the state of

Beresford is a city in Lincoln and Union counties in the of . The southern two-thirds is part of the Sioux City, // while the northern one-third is part of the Metropolitan Statistical Area. The population was 2,006 as of the 2000 census. The "" is the weekly newspaper.

Before the city was incorporated, the town was known as Paris, Dakota Territory. The city was renamed after Lord and was formally incorporated on , .

There were 852 households out of which 29.6% had children under the age of 18 living with them, 52.5% were married couples living together, 7.2% had a female householder with no husband present, and 37.1% were non-families. 33.8% of all households were made up of individuals and 19.7% had someone living alone who was 65 years of age or older. The average household size was 2.29 and the average family size was 2.94.

is the only high school in the Beresford school district.