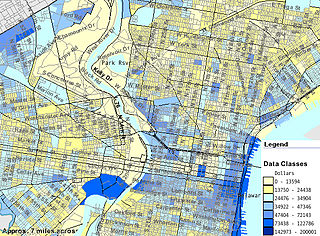 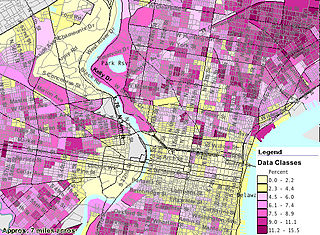 Percent of children under 5 years in Center City and surrounding sections, 2000 Census.

The mean travel time to work was 32.0 minutes for workers 16 years of age and older. Residents of Center City, however, had much shorter commutes. Center City has the third largest downtown residential population in the country, and most walk to work.

63.97% of Philadelphians drove an automobile to work (including carpools), 25.93% commuted by public transit, 9.22% walked to work, and 0.88% commuted by bicycle. 35.74% of households did not have an automobile. The proportion of Philadelphians who do not commute by auto is high compared to most other American cities, although lower than the proportions in New York City and Washington, D.C. 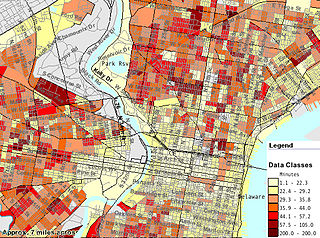 Mean travel time to work, 2000 Census. Note 1 to 22 minute commutes in Center City while some block groups in North Philadelphia exceed an hour. Low-wage service workers commonly travel to the suburbs for employment.

From its founding through the early 19th century, the City of Philadelphia was considered the area between the Delaware and Schuylkill Rivers and between Vine and South Streets. In 1854, the Act of Consolidation incorporated the rest of Philadelphia County and created Philadelphia's modern border. This resulted in a large population increase, evident in the 1860 census.

Philadelphia experienced steady growth between 1860 and 1950, except for a brief lull in 1930, which was due in part to the Great Depression. Its population peaked at 2,071,605 in 1950. Between 1950 and 2000, the city lost 554,055 people, or 26.7% of its population. To put this into perspective, Chicago lost 20.0% of its population during the same era, and Baltimore lost 31.4%, according to US Census data. This nationwide trend is often referred to as "white flight" because upper- and middle-class families, enabled by nationwide improvements to infrastructure, left cities in favor of their surrounding suburbs.

Estimates predict that the city will experience population growth slightly before or after 2010. These estimates and the reasons behind them are sources of great debate. Possible reasons for the turnaround include increases in immigration from foreign countries (especially from countries like India, South Korea and Mexico) and migration from more expensive cities in the Northeast Corridor. Both wealthy transplants and Asian American investors from New York City have received media attention for setting their sights on Philadelphia.[4][5][6] The ten-year tax abatement, a historically undervalued housing market, improvements to the waterfront, and continuing redevelopment throughout the city are thought to be factors drawing people to the area. 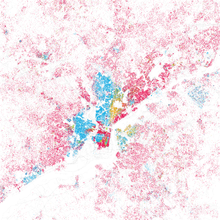 Race in Philadelphia. Each dot represents 25 residents. Red for Whites; blue for blacks; green for Asians; and Orange for Latinos

Compared to its immigrant-magnet peers in the Northeast, Philadelphia has long been considered a "black and white" city of mostly native born African Americans and Whites. However the number of Hispanics and Asian Americans has increased over the past 20 years and continues to accelerate. The number of foreign-born residents increased by 34,000 between 1990 and 2000. Of foreign-born Philadelphians, 38.5% were from Asia, 30.3% were from Europe, 23.4% were from Latin America, and 6.7% were from Africa. 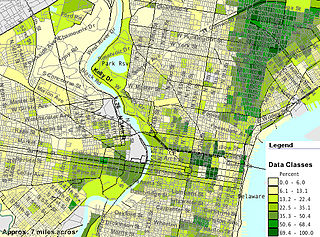 Percent who spoke a language other than English at home, 2000 Census. Notable are Chinatown, international students in University City, and Hispanic Americans in eastern North Philadelphia.

Increases in Latino immigration and migration have fueled the growth of El Centro de Oro in Fairhill. As of 2010, Philadelphia has the second largest Puerto Rican community in the United States, after New York City.[citation needed] Puerto Ricans constitute over 75% of the Latino population in the city and most[quantify] live in the area that straddles the border between the North and Northeast sections of the city. Philadelphia has also seen strong increases among its Dominican and Mexican populations.[citation needed]

Mexican immigrants have drastically changed the Italian Market area in South Philadelphia and have set up a small community in and around the market. Today[when?] Mexicans are the third largest Hispanic community, after Puerto Ricans and Dominicans, both of who mainly reside in North Philadelphia.[citation needed]

The Asian American community has long been established in the city's bustling Chinatown district, but recent Vietnamese immigrants have also forged neighborhoods and bazaars alongside the venerable Italian market. Korean immigrants have notably added to the melting pot of Olney.[citation needed]

Irish immigrants and the Irish Americans are associated in the North and Northeast Philadelphia neighborhoods, including Fishtown, Kensington, Mayfair, Frankford, Port Richmond, Holmesburg, Harrowgate, and Juniata, as well as Devil's Pocket, Whitman, and Pennsport in South Philly in addition to many other areas.[citation needed]

Italian immigrants and the Italian American community are frequently associated with South Philadelphia as well as Bella Vista, Central South Philadelphia, Girard Estates, Marconi Plaza, Packer Park, the Italian Market area, and Tacony, among others. Poles and Polish Americans have a rich history in the Port Richmond-Bridesburg area, as well as areas of Kensington and the Northeast. Many other cultures can also be found throughout the city, including West Indians in the Cedar Park neighborhood, and many Russian, Greek and Ukrainian immigrants in the Near Northeast.[citation needed]

Philadelphia has one of the most notable West African populations in the United States; the city counts many Liberian Americans and Nigerian Americans among its residents.[citation needed] By 2008 about 15,000 Liberians had immigrated to Philadelphia; the Liberians left their native country due to two civil wars and the destruction of Liberian infrastructure.[7] There is also a sizable community of Jamaicans and Haitians.

European immigration is also growing, with more Irish, Italian, and Polish immigrants. Recently[when?], thousands of Russian and Ukrainian immigrants from Eastern Europe (many of whom are Jewish) have arrived. There are other growing nationalities, which include Spanish, Portuguese, Slovak, Greek and Serbian.

Christianity is the dominant religion in the city of Philadelphia. The largest denomination is Roman Catholic. Philadelphia's Jewish population, the sixth largest in the nation, was estimated at 206,000 in 2001 and almost 300,000 in 2009.[8] There is also a significant Eastern Orthodox population as well as a strong Lutheran community. In fact, the greater Philadelphia area is home to one of the largest Lutheran communities in America (The largest on the East Coast).[citation needed]

Many new religions have arrived, including Islam and Hinduism. With immigration from the Middle East, the Horn of Africa, Pakistan, Bangladesh and India, these two religions have increased their presence. The largest concentrations of Muslims and Hindus live in the Northeast and North parts of the city, Center City, West Philadelphia, and sprawling into the nearby suburbs.

Religions with less numerous adherents can also be found. There is Buddhism in Chinatown, and Caribbean and African traditional religions in North and West Philadelphia. These numbers are also growing. Historically the city has strong connections to The Religious Society of Friends, Unitarian Universalism, and Ethical Culture, all of which continue to be represented in the city. The Friends General Conference is based in Philadelphia.

The Muslim African American community in Philadelphia has grown substantially over the last decade.