Christian
This article is about Christian people. For other uses, see Christian (disambiguation).

pronunciation (help·info) is a person who adheres to Christianity, an Abrahamic, monotheistic religion based on the life and teachings of Jesus of Nazareth as recorded in the Canonical gospels and the letters of the New Testament. "Christian" derives from the Koine Greek word Christ, a translation of the Biblical Hebrew term Messiah.[1]

Central to the Christian faith is the gospel, the teaching that humans have hope for salvation through the message and works of Jesus, and particularly his atoning death on the cross. Christians also believe Jesus is the Messiah prophesied in the Hebrew Bible.[2] Most Christians believe in the doctrine of the Trinity ("tri-unity"), a description of God as Father, Son, and Holy Spirit, which retains the monotheistic belief of Christianity's Abrahamic heritage through an ineffable confluence. This includes the vast majority of the churches in Christianity. A minority of Christian churches are Nontrinitarians.

The term "Christian" is also used adjectivally to describe anything associated with Christianity, or in a proverbial sense "all that is noble, and good, and Christ-like."[3] It is also used as a label to identify people who associate with the cultural aspects of Christianity, irrespective of personal religious beliefs or practices.[4]

The Greek word Χριστιανός (christianos)—meaning "follower of Christ"—comes from Χριστός (christos)—meaning "anointed one"[5]—with an adjectival ending borrowed from Latin to denote adhering to, or even belonging to, as in slave ownership.[6] In the Greek Septuagint, christos was used to translate the Hebrew מָשִׁיחַ (Mašíaḥ, messiah), meaning "[one who is] anointed."[7] In other European languages, equivalent words to 'Christian' are likewise derived from the Greek, such as 'Chrétien' in French and 'Cristiano' in Spanish.

The first recorded use of the term (or its cognates in other languages) is in the New Testament, in Acts 11:26, which states "...in Antioch the disciples were first called Christians." The second mention of the term follows in Acts 26:28, where Herod Agrippa II replies to Paul the Apostle, "Do you think that in such a short time you can persuade me to be a Christian?" The third and final New Testament reference to the term is in 1 Peter 4:16, which exhorts believers, "...if you suffer as a Christian, do not be ashamed, but praise God that you bear that name."

Another term for Christians which appears in the New Testament is "Nazarenes" which is used by the Jewish lawyer Tertullus in Acts 24. Tertullian (Against Marcion 4:8) records that "the Jews call us Nazarenes," while around 331 AD Eusebius records that Christ was called a Nazoraean from the name Nazareth, and that in earlier centuries "Christians," were once called "Nazarenes."[8] The Hebrew equivalent of "Nazarenes", Notzrim, occurs in the Babylonian Talmud, and is still the modern Israeli Hebrew term for Christian.

All three original New Testament usages verses reflect a derisive element in the term Christian to refer to followers of Christ who did not acknowledge the emperor of Rome.[9] The town Antioch, which is said to have given them the name Christian, had a reputation for coming up with such nicknames.[10] However Peter's apparent endorsement of the term, led to it being preferred over "Nazarenes" and the term Christianoi from 1 Peter becomes the standard term in the Early Church Fathers from Ignatius and Polycarp onwards.[11]

The earliest occurrences of the term in non-Christian literature include Josephus, referring to "the tribe of Christians, so named from him;"[12] Pliny the Younger in correspondence with Trajan; and Tacitus, writing near the end of the 1st century. In the Annals he relates that "by vulgar appellation [they were] commonly called Christians"[13] and identifies Christians as Nero's scapegoats for the Great Fire of Rome.[14]

A wide range of beliefs and practices is found across the world among those who call themselves Christian. There is usually a consensus among many denominations about what defines a Christian, but disagreement does exist among some sects and denominations on a common definition of "Christianity." Philosopher Michael Martin, in his book The Case Against Christianity, evaluated three historical Christian creeds (the Apostles' Creed, the Nicene Creed and the Athanasian Creed) to establish a set of basic assumptions which include belief in theism, the historicity of Jesus, the Incarnation, salvation through faith in Jesus, and Jesus as an ethical role model.[15] 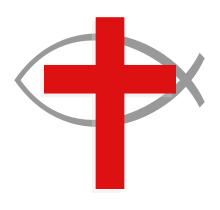 The cross and Ichthys, two symbols often used by Christians to represent their religion.

As the identification of the Messiah with Jesus is not accepted within Judaism, the Talmudic term for Christians in Hebrew is Notzrim ("Nazarenes"), originally derived from the fact that Jesus came from the village of Nazareth in Israel.[16] However, Messianic Jews are referred to in modern Hebrew as יהודים משיחיים (Yehudim Meshihi'im).

In Arabic-speaking cultures, two words are commonly used for Christians: Nasrani (نصراني), plural "Nasara" (نصارى) is generally understood to be derived from Nazareth[17] through the Syriac (Aramaic); Masihi (مسيحي) means followers of the Messiah.[17][18]

Where there is a distinction, Nasrani refers to people from a Christian culture and Masihi means those with a religious faith in Jesus.[19] In some countries Nasrani tends to be used generically for non-Muslim white people.[19] Another Arabic word sometimes used for Christians, particularly in a political context, is Salibi; this refers to Crusaders and has negative connotations.[18][20]

Nasrani or Nasranee may also refer to the Syrian Malabar Nasrani people, a Christian ethno-religious group from Kerala, India, are a mixed race people of Chaldean, Malayali Brahmin, Syriac, Jewish and other Malayali Hindu Castes in decreasing percentage of ethnic ancestry.

In the Indian subcontinent Christians also call themselves "Isaai" (Hindi: ईसाई, Urdu: عیسائی), and are also known by this term to Hindus and others in south Asia.[21] This is related to the name they call Jesus, "Isa Masih".

In the past, the Malays used to call the Portuguese Serani which meant "followers of the Nazarene". The term Serani is used for the creole Christian community of Malaysia today.

The Chinese word is 基督徒 (pinyin: jīdū tú), literally "Christ follower." In Japan, the term Kirishitan (吉利支丹, 切支丹, キリシタン?), from Portuguese cristão, referred to Roman Catholic Christians in the 16th and 17th centuries before the religion was banned by the Tokugawa Shogunate. Today, they are referred to by the English-derived term Kurisuchan.

As of the early 21st century, Christianity has around 2.1 billion adherents.[22][23][24] The faith represents about a quarter to a third of the world's population and is the largest religion in the world, with approximately 38,000 Christian denominations.[25] Christians have composed about 33 percent of the world's population for around 100 years. The largest Christian denomination is the Roman Catholic Church, with 1.17 billion adherents, representing half of all Christians.[26]