Christianity is a major religion in Nigeria accounting for about 50% of the population. Based on a 2003 Nigerian Religious and Demographic survey, Christians comprised 48.2% of the Nigerian population.[1] Christians are dominant in the southern and central region in Nigeria. Nigeria has the largest Christian population compared to any country with Christians in Africa with more than 70 million persons in Nigeria belonging to the church with various denominations.

Since the introduction of Sharia penal law in some of the Northern states, violence between Christians and Muslims has increased.[2] Christianity is growing fast in Nigeria and according to the 1963 census, only 35% of the population at the time were Christian as compared to around 50% today.

The Catholic Church in Nigeria

The Catholic church being the largest Christian body in the world also has a huge and growing following in Nigeria. In 2005, there were an estimated 19 million baptised Catholics in Nigeria.[3] The recent Annuario Pontificio lists 25 million.[4] The Archdioceses of the Roman Catholic Church are: Abuja, Benin City, Calabar, Ibadan, Jos, Kaduna, Lagos, Onitsha and Owerri.[5] It has about 19 million members in Nigeria.[6] Cardinal Francis Arinze is a Roman Catholic Cardinal from Nigeria.[7] 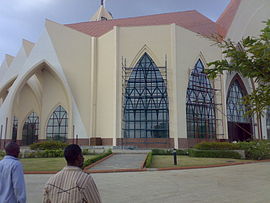 The National Church of Nigeria

The Nigerian Baptist Convention has about 4 million baptized members.[10]

The Church of Jesus Christ of Latter-day Saints also has a growing presence within Nigeria. As of 2009, the church claims 93,532 members in the country[14] and has established 289 congregations.[14]

Relations with Muslims have been strained, killings of Christians have been rampant since at least 1999,[15] The 2010 Jos riots saw clashes between Muslim herders against Christian farmers near the volatile city of Jos, resulting in hundreds of casualties.[16] Officials estimated that 500 people were massacred in night-time raids by rampaging Muslim gangs.[17]

The Pentecostal Fellowship of Nigeria (PFN) threatened to sue Nigeria for (in their words) “the mindless killing of Christians by a Muslim fundamentalist sect – Boko Haram.” from a Christian group: "For too long, the Christian Community had kept quiet, hoping that one day reason will prevail and the state chief executives will on their own compensate the victims and rebuild their demolished churches and homes."[18]