Ichthys (sometimes spelled Ichthus, or Ikhthus, from Koine Greek: ἰχθύς, capitalized ΙΧΘΥΣ or ΙΧΘΥϹ) is the ancient and classical Greek word for "fish." In English it refers to a symbol consisting of two intersecting arcs, the ends of the right side extending beyond the meeting point so as to resemble the profile of a fish, used by Early Christians as a secret symbol[1] and now known colloquially as the "sign of the fish" or the "Jesus fish."[2]

Ichthys as adopted as a Christian symbol.

Historians say the 20th-century use of the ichthys motif is an adaptation based on an Early Christian symbol which included a small cross for the eye or the Greek letters "ΙΧΘΥΣ".

An ancient adaptation of ichthys is a wheel which contains the letters ΙΧΘΥΣ superimposed such that the result resembles an eight-spoked wheel.

Fish in the Gospels

Fish are mentioned and given symbolic meaning several times in the Gospels. Several of Jesus' twelve Apostles were fishermen. He commissions them with the words "I will make you fishers of men".

At the feeding of the five thousand, a boy is brought to Jesus with "five small loaves and two fish". The question is asked, "But what are they, among so many?" Jesus multiplies the loaves and fish to feed the multitude.

In Matthew 13:47-50, the Parable of Drawing in the Net, Jesus compares God's decision on who will go to heaven or to hell ("the fiery furnace") at the end of this world to fishers sorting out their catch, keeping the good fish and throwing the bad fish away.

In John 21:11, it is related that the disciples fished all night but caught nothing. Jesus instructed them to cast the nets on the other side of the boat, and they drew in 153 fish.

A less commonly cited use of fish in Christ's life may be found in the words of Matthew 17:24-27, in which, upon being asked if his Teacher does not pay the temple (two-drachma) tax, Simon Peter answers, "Yes." Christ tells Peter to go to the water and cast a line. He says that a coin sufficient for the tax will be found in the fish's mouth. Peter does as told and finds the coin.

The ichthys is seen in 1st-century catacombs in Rome.

According to tradition, ancient Christians, during their persecution by the Roman Empire in the first few centuries after Christ, used the fish symbol to mark meeting places and tombs, or to distinguish friends from foes:

…when a Christian met a stranger in the road, the Christian sometimes drew one arc of the simple fish outline in the dirt. If the stranger drew the other arc, both believers knew they were in good company. Current bumper-sticker and business-card uses of the fish hearken back to this practice. The symbol is still used today to show that the bearer is a practicing Christian.
—Christianity Today, Elesha Coffman, "Ask the Editors", [3] 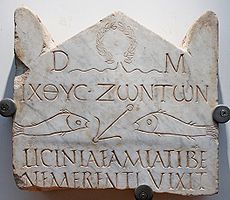 There are several other hypotheses as to why the fish was chosen. Some sources indicate that the earliest literary references came from the recommendation of Clement of Alexandria to his readers (Paedagogus, III, xi) to engrave their seals with the dove or fish. However, it can be inferred from Roman monumental sources such as the Capella Greca and the Sacrament Chapels of the catacomb of St. Callistus that the fish symbol was known to Christians much earlier. Another probable explanation is that it is a reference to the scripture in which Jesus miraculously feeds 5,000 people with fish and bread (Matthew 14:15-21, Mark 6:30-44, Luke 9:12-17, and John 6:4-13). The ichthys may also relate to Jesus or his disciples as "fishers of men" (e.g., Mark 1:17). Tertullian, in his treatise On Baptism, makes a pun on the word, writing that "we, little fishes, after the example of our ΙΧΘΥΣ Jesus Christ, are born in water."[4] Still another explanation could be the reference to The Sign of Jonah. Just like he was in the belly of a big fish, so Christ was crucified, entombed for three days, and then rose from the dead.

Fish may have been used as symbols before Christianity, possibly representing several goddesses;[5] it has been associated with Aphrodite, Atargatis, Dagon, Ephesus, Isis, Delphine and Pelagia.[6] Barbara Walker, in her book The Woman's Dictionary of Symbols and Sacred Objects, suggests that Ichthys was the son of the sea goddess Atargatis and that his symbol was a representation of sexuality and fertility. The fish has also been used to symbolize Pisces, the Zodiac sign. The Sun was in Pisces, the fish, on the Vernal Equinox shortly before the founding of Christianity and, depending on the line of demarcation, may remain so for approximately 600 more years,[7] though this is a topic of debate: see Astrological age.

In non-Christian religious symbolism, the pointed oval or vesica piscis shape can represent the female genitalia.

Revival and adaptations of the symbol

Members of the University of Queensland Evangelical Union used the ichthys symbol when they formed a temporary Christian commune to be a witnessing presence at the Aquarius Rock Festival at Nimbin in May, 1973. From this time the display of the ichthys symbol, sometimes in combination with an Aquarius Festival sticker in the rear window of Kombi vans became common. The car bumper sticker followed quickly.

The symbol was rapidly adopted for use by other Christian bodies within Australia such as the Church Mission Society from whose shop near St. Andrew's Cathedral, Sydney could be purchased small items of jewelry with the ichthys motif. From Sydney the use of the motif was taken to Asia by university students who had been resident at International House which had close ties with the A.F.E.S.. The ichthys symbol was soon in use among Christians across the world.

The "Jesus Fish" has become an icon of modern American Protestant Christianity. Today, it can be seen as a decal or emblem on the rear of automobiles or as pendants or necklaces as a sign that the owner is a Christian. It is incorporated into business logos or in business advertisements and listings in telephone books. It is also seen on clothing. Versions of this include an ichthys with "Jesus" or "ΙΧΘΥΣ" in the center, or simply the Ichthys outline by itself. This badge may also be seen in e-mail signatures with the symbols "<><" or "<°(((><".[citation needed]

It can also be seen in Grant Morrison's The Invisibles, where a character explains that it represents the center, interlocking part of a Venn diagram, symbolic of reality itself which is supposedly formed by the intersection of two higher, warring planes of existence.

In the video for singer-songwriter Beck's "Loser", one man wears a T-shirt featuring the ichthys with the word "LOSER".[8]

Ichthus Music Festival is an annual large outdoor Christian music festival is held every year in mid-June in the town of Wilmore, Kentucky.

Parodies of the ichthys symbol

A Darwin fish is an Ichthys with stylized legs
Main article: Parodies of the ichthys symbol

Distortions of the Ichthys symbol in modern culture rely on its use as a "Jesus fish" symbol of Christianity.[9] Examples include: