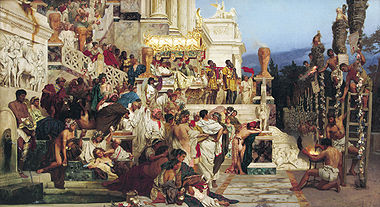 The Torches of Nero, by Henryk Siemiradzki. According to Tacitus, Nero targeted Christians as those responsible for the fire.

According to Tacitus, the fire spread quickly and burned for six days.[2]:XV.40 Only four of the fourteen districts of Rome escaped the fire; three districts were completely destroyed and the other seven suffered serious damage.[2]:XV.40 The only other contemporaneous historian to mention the fire was Pliny the Elder, who wrote about it in passing.[3] Other historians who lived through the period (including Dio Chrysostom, Plutarch and Epictetus) make no mention of it.[4] The only other account on the size of fire is an interpolation in a forged Christian letter from Seneca to Paul: "A hundred and thirty-two houses and four blocks (insulae) have been burnt in six days; the seventh brought a pause".[5] This account implies less than a tenth of the city was burnt. Rome contained about 1,700 private houses and 47,000 insulae or tenement blocks.

It was said by Cassius Dio that Nero, the emperor at the time, sang the "Sack of Ilium" in stage costume as the city burned.[6] However, Tacitus' account has Nero in Antium at the time of the fire.[7] Tacitus said that Nero's playing his lyre and singing while the city burned was only a rumor.[7]

According to Tacitus, upon hearing news of the fire, Nero rushed back to Rome to organize a relief effort, which he paid for from his own funds.[7] After the fire, Nero opened his palaces to provide shelter for the homeless, and arranged for food supplies to be delivered in order to prevent starvation among the survivors.[7] In the wake of the fire, he made a new urban development plan. Houses after the fire were spaced out, built in brick, and faced by porticos on wide roads.[8] Nero also built a new palace complex known as the Domus Aurea in an area cleared by the fire.[9] The size of this complex is debated (from 100 to 300 acres or 40.5 to 121.4 hectares).[10][11][12] To find the necessary funds for the reconstruction, tributes were imposed on the provinces of the empire.[13]

Rumors of arson and the persecution of Christians

It is uncertain who or what actually caused the fire — whether accident or arson. According to Tacitus, some in the population held Nero responsible.[14] To diffuse blame, Nero targeted the Christians.[14] There were Christians who confessed to the crime, but it became known that Christians were forced to confess by means of torture,[14] and the passage is unclear as to what the Christians confessed to — being arsonists or Christians. Suetonius and Cassius Dio favor Nero as the arsonist with an insane desire to destroy the city as his motive,[15] or to rebuild Rome in a new style more to his liking. However, major accidental fires were common in ancient Rome. In fact, Rome burned again under Vitellius in 69[16] and under Titus in 80.[17]

According to Tacitus, Nero ordered Christians to be thrown to dogs, while others were crucified or burned to serve as lights.[14]

He describes the event as follows:

As a consequence, to get rid of the report, Nero fastened the guilt and inflicted the most exquisite tortures on a class hated for their abominations, called Christians [or Chrestians[18]] by the populace. Christus, from whom the name had its origin, suffered the extreme penalty during the reign of Tiberius at the hands of one of our procurators, Pontius Pilatus, and a most mischievous superstition, thus checked for the moment, again broke out not only in Judaea, the first source of the evil, but, even in Rome, where all things hideous and shameful from every part of the world find their centre and become popular. In accordance, an arrest was first made of all who pleaded guilty; then, upon their information, an immense multitude was convicted, not as much of the crime of firing the city as of hatred against mankind. Mockery of every sort was added to their deaths. Covered with the skins of beasts, they were torn by dogs and perished, or were nailed to crosses, or were doomed to the flames and burnt, to serve as a nightly illumination, when daylight had expired.[14]

The varying historical accounts of the event come from three secondary sources — Cassius Dio, Suetonius and Tacitus. The primary accounts, which possibly included histories written by Fabius Rusticus, Cluvius Rufus and Pliny the Elder, did not survive. These primary accounts are described as contradictory and gross exaggerations.[19] At least five separate stories circulated regarding Nero and the fire:

Modern scholars tend to agree with Tacitus and believe that Nero probably did not cause the fire. It is postulated that the fire had been intentionally started to create room for Nero's Domus Aurea, but the fire started 1 km (0.6 miles) away from the site where this palace would later be built, on the other side of the Palatine Hill. Moreover, the fire destroyed parts of Nero's own palace, the Domus Transitoria. It seems unlikely that Nero wanted to destroy this palace since he actually salvaged some of the marble decoration and integrated it into the new Domus Aurea. Even the paintings and wall decorations of the new palace were similar to the ones that had been burned. Last, the fire started just two days after a full moon, a time that, it is presumed, would not have been chosen by arsonists who would not have wished to be observed.[22]