There were 40,938 households out of which 29.2% had children under the age of 18 living with them, 38.2% were married couples living together, 16.8% had a female householder with no husband present, and 40.2% were non-families. Thirty-three and four tenths percent of all households were made up of individuals and 13.3% had someone living alone who was 65 years of age or older. The average household size was 2.39 and the average family size was 3.08. 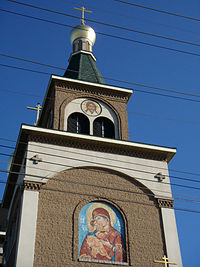 Since the mid 1990s, the International Institute of Erie (IIE), founded in 1919, has helped with the resettlement of refugees from Bosnia, Eritrea, Ghana, Iraq, Kosovo, Liberia, Somalia, Sudan, the former Soviet Union, and Vietnam.[6]

In the early 20th century, Erie had a significant Russian immigrant community, many of whom worked in the shipbuilding plants along the bayfront. Unusual for a Great Lakes city, a substantial number of these Russian immigrants were Old Believers. Even today, the gold-domed Church of the Nativity,[7] on the bayfront near the former heart of the Russian community, is an Old Believer church, home to famed Icon painter Fr. Theodore Jurewicz.[8] Bishop Daniel of Erie,of the Russian Orthodox Church Outside Russia, is based in Erie and is the Vicar President of the Synod of Bishops for the Old Believers.[9] 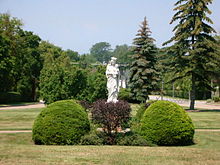 Catholic influence is felt beyond the parish in Erie; here, at entrance to Mercyhurst College.

Erie has a Jewish community that is over one hundred fifty years old. Temple Anshe Hesed, a member of the Union for Reform Judaism, is served by its spiritual leader, Rabbi John L. Bush.[10] Erie is home to the Roman Catholic Diocese of Erie, covering 13 counties (9,936 mi²- the largest in the state). Its diocesan seat is the Saint Peter Cathedral in Erie, which has a 265 ft central tower flanked by two 150 ft towers. It is among the tallest churches in the U.S and was constructed in 1873.

According to the Association of Religion Date Archives,[11] Erie County had a total 2000 population of 280,843 persons, of which 103,333 claimed affiliation with the Catholic Church, 40,301 with mainline Protestant houses of worship, and 12,980 with evangelical Protestant churches.