Muharraq (Arabic: المحرق‎) (meaning Place of Ashes), is Bahrain's third largest city, and served as its capital until 1923. The Muharraq Town was established by the Sunni Arab tribes in the early nineteenth century.[citation needed] The city is located on Muharraq Island and has long been a centre of religiosity. Bahrain International Airport is located on the island.

The city's origins are ancient, going back to the time of Dilmun some 5,000 years ago, but it came to prominence in the historical records during the era of Tylos when Bahrain came under domination of the Selucid Greeks, and Muharraq was the centre of a pagan cult dedicated to the shark god, Awal. The city's inhabitants, who depended upon seafaring and trade for their livelihood, worshipped Awal in the form of a large statue of a shark located in the city.

By the fifth century AD, Muharraq had become a major centre of Nestorian Christianity, which had come to dominate the southern shores of the Persian Gulf. As a sect, the Nestorians were often persecuted as heretics by the Byzantine Empire, but Bahrain was outside the Empire's control offering safety. The names of several of Muharraq's villages today reflect this Christian legacy, with Al-Dair meaning 'the monastery' and Qalali meaning a 'monk's cloisters'.

Muharraq is home to Muharraq Club, which is Bahrain's most successful football club. The city is also known for its traditional market, or souq, and as a home of traditional arts and music; Ali Bahar, a popular and successful Bahraini singer is from Muharraq. Adjacent to Muharraq are the man-made Amwaj Islands, known for their large buildings, hotels and beaches. 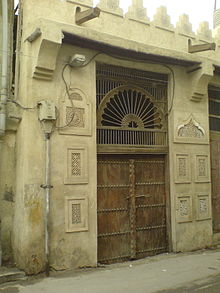 A doorway in the traditional architectural style in Muharraq