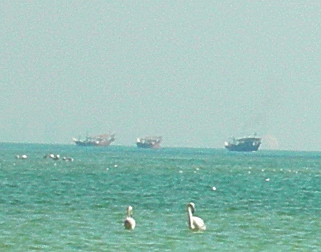 The historic oasis area shows its first archeological evidence of settlement beginning about 3500 BC. It was known by other names, such as Al-Khatt ( _ar. الخَطّ), immortalized in the poetry of , , (in his famous Ba'yya), and others. The word "Khatty" became the preferred "" for "spear" in traditional poetic writing until the dawn of the modern era, supposedly because the region was famous for spear making, just as "muhannad" ("of ") was the preferred kenning for "sword". The older name also survives as the eponym of several well-known local families ("Al-Khatti", spelled variously in English).

Qatif functioned for centuries as the main town and port in this region of the Gulf. In fact, it was called Cateus by the Greeks, and some early European maps even labeled the entire present-day Persian Gulf as the "Sea of El Catif". Qatif oasis and the nearby island of are some of the most interesting tourist and archeological sites in the Kingdom, which reflects the importance of the eastern part of the Arabian Peninsula in the past.

Until 1521 and Ottoman rule, Qatif belonged to the historical region known as the , along with and the present-day islands.

In 899 the conquered the region with the oases of Qatif and . They declared themselves independent and reigned from al-Mu'miniya near modern until 1071.

Qatif enjoys a continental climate with temperatures approaching 49 degrees Celsius (120.2 F) in the summer and an average humidity of 75%. In winter, temperatures range between 18 and 25 degrees Celsius. During the months of May and June, warm seasonal winds called affect the region. The rest of the year, the moist southern winds, or , bring humidity. There is little rainfall.

The Qatif region is the largest center of in Saudi Arabia. The community celebrates and other Shia days of remembrance in open, lively seasons.

As of 2004, the total population of Qatif was 474,573; [ [http://www.planning.gov.sa/docs/province_by_county.pdf] ] ranking as one of the ten most populated counties in Saudi Arabia. Qatif has one of the lowest numbers of non-Saudi residents in the kingdom (only 59,808).

Traditionally reliant on agriculture, Qatif has become famous in the oil industry recently, mainly due to the giant , which produces 800,000 barrels of oil each day, making Qatif possibly the most oil-producing city in the world. Other petroleum industries within the city include gas separator plants and pipeline facilities. Pipelines are distributed around Qatif area which had been an obstacle for urban expanding that resulted in removal of farms or building artificial lands on the sea.

In addition to its involvement in the oil industry and commerce, the Qatif region has a thriving agricultural sector, producing a wide range of crops, including dates (especially the khlass, khunaizi, maji, hallao, and khsab al-asfour varieties), limes, bananas, grapes, pomegranates, figs, tomatoes, okra, radishes, and onions. Qatif is also the main supplier of fish to the kingdom as well as the largest fishing center in the gulf region.

Qatif is well-known for its traditional markets (s) such as the weekly Thursday Market "Suq Alkhamees" and "Suq Waqif".

The Qatif coastline is rich with shrimp and many varieties of , especially the safi ("" species), kan`ad (" commerson"), hamoor (), shi`ri, badeh, and mayd varieties. It has the largest fish market in the kingdom and the gulf region.

Qatif enjoys excellent connections with other Saudi urban centres by highway; it is also close to the causeway that connects the kingdom with the nation of . Air service is provided at the near by .